Did you watch the 2011 Grammy Awards last night, bellas? I did, and I really enjoyed parts of the show! Unlike in years past where performances have dragged on and winners left me scratching my head, I thought the 2011 awards got it right in many ways. These were my favorite Grammy award moments! 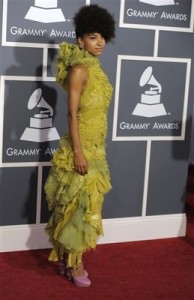 If you’ve never heard of her before, clearly you haven’t been reading Afrobella long enough! Esperanza Spalding has been one of my favorite artists — and best interviews — since 2008. Last night I loved seeing her beautiful natural coif in the audience, and when she won, I screamed in happiness. The gorgeous, natural haired musician made musical history by becoming the first jazz artist to ever win the Best New Artist category. YAY Esperanza!! You made us SO proud last night!

2 — The Aretha Franklin tribute gave me CHILLS. Jennifer Hudson, Christina Aguilera, Florence Welch, Martina McBride, and Yolanda Adams turned it OUT. Click to watch before the powers that be take it off YouTube!

AND did you notice how much weight Aretha has lost? GO ‘HEAD Re-Re!!!! Your fans are rooting for you!!

3 — The old timers. Mick Jagger proved to everyone watching that the “It Factor” isn’t something you age out of. At 67, the man was still strutting and rockin the crowd. Bob Dylan’s voice has evolved into a full throated Tom Waits kind of experience now. And Barbra Streisand graced the stage in her first Grammy performance since 1980. WOW. Ageless and evergreen indeed.

4 — Cee Lo Green is a soul machine and he proved it last night in a colorful and SUPER FUN performance with a wacky feathered costume reminiscent of old school Elton John, Muppets on backup, and um…Gwyneth Paltrow? Definitely a highlight of the night!

5 — the newcomers you may not have heard of before. Last summer, I was lucky enough to catch Mumford and Sons at Lollapalooza, and they were amazing! I was thrilled to see them rock out on banjo during the Grammys last night. This is the song they performed, The Cave.

And according to my Twitter timeline, they made an impact and possibly won some new fans last night. Which is awesome. And from the minute Rihanna stopped singing during her performance with Eminem, I was like who is THAT singing now?? Her name is Skylar Grey and from what I hear, she wrote the hook on Love The Way You Lie and we’re going to hearing a LOT from her this year. Which I’m happy about because homegirl can SING.

Those were my fave moments of last night’s Grammy Awards. I don’t think anyone topped my favorite performance is 2010 – Pink remains in a class all by herself! – but the show was pretty entertaining, start to finish. What were your favorite moments?

« On My Way to NYC!
A Valentine’s Day Recipe from Chef Julius »