I think I’m still caught up in the afterglow. For my birthday, my husband got me the best surprise ever! Amazing seats to see Janet Jackson LIVE at the historic Chicago Theater. Not only did I NOT know that we even HAD Janet Jackson tickets, but he told me the seats weren’t very good to throw me off the scent. When we were escorted to our seats on Tuesday night I was ready to FAINT. 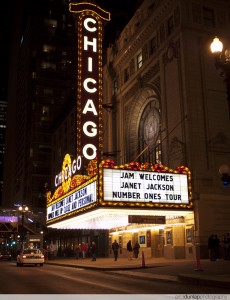 Let me backtrack and put this in some context real quick.

Picture me at 9 years old. I’m visiting Venezuela for the first time with my parents, and we go to a record store. My dad gives me money and lets me buy whatever I want there, perhaps for the first time. I have enough money for one album. I buy Janet Jackson’s Rhythm Nation 1814 on vinyl. And when I get back to Trinidad I listen to that album on repeat until I know every syllable of it.

OK. Now I’m all grown up and that inner 9 year old inside me was FREAKING OUT last night at the Janet concert. In case you didn’t know, this tour that Janet is on is all her number one hits. No filler, no randomness. Just the Janet we’ve grown up with and loved all along.

My husband is a wonderful gift giver but not a Janet Jackson fan, so it was interesting seeing the show with him. Apparently on every stop of her tour, Janet dedicates a song to that city. Chicago’s song was All For You and from the moment the video began, the crowd got up and started dancing even though nobody was even on stage yet. My husband was like, “this is so weird.” I had to explain – this woman is an icon and we’re all SO EXCITED to see her! The reaction is understandable!

From the moment Janet took the stage, the electricity was crackling in the air. First of all, she looks AMAZING. Curvy, firm, gorgeous, confident. She opened with The Pleasure Principle and the crowd went WILD. Janet’s whole first set was straight out of the Control era, with a few key hits from Rhythm Nation, and she even threw in Feedback for good measure.

I didn’t bring my camera because I didn’t think I was allowed to 🙁
BUT there are some GREAT videos now popping up on YouTube! Behold…

Janet held the audience in the palm of her hand. Everyone around me was jumping, dancing, SINGING and absolutely loving every moment. She slowed down the dancing for a minute, and crooned her slow jams and I’ll gladly admit that tears came to my eyes during the first strains of Again. Not because the song is deeply meaningful to me or speaks to a previous relationship, not at all. I cried a little because as a teenager in Trinidad who watched Janet’s video for Again on REPEAT on MTV back in the day…I never imagined I’d be there in person to hear her sing it. It was such a beautiful moment.

After the slow jams, Janet picked things right back up. She did every song I wanted her to do and then some. I Get Lonely. Miss You Much. Alright. Escapade. Love Will Never Do (Without You). If. Scream. And of course, OF COURSE the encore and the final song was Together Again, sung while photos of young Janet and young Michael flashed on the screen behind her.

A truly touching and fitting end to an AMAZING concert experience. Janet Jackson is a force to be reckoned with and I now know, if she’s performing live somewhere, I wanna be there. I don’t care where it is. Anytime, Anyplace.

The Chicago Tribune’s Greg Kot reviewed Janet’s show and called it ” the best Janet Jackson performance I’ve covered in 20-plus years.” I’m SO glad I got to see it!

Photo at the top of this post by the amazing Errol Dunlap.