There are moments when I gotta pinch myself and ask the question — is this really happening? Is this MY LIFE?

One of those moments took place less than two weeks ago, when I was invited by my friends at Dove to attend Oprah’s Surprise Spectacular at the United Center. I was told I could bring one guest and I almost had a King Solomon moment…but I chose my friend, personal trainer, and little sister from another mister, Renisha of Renewed Fitness. I think it’s pretty safe to say I made her whole MONTH with that one!

Dove invited a very small group of bloggers – there were just five of us (including our guests). And we had great seats! One row up from the floor, and we were seated near one of the major floor entrances of the United Center. From the minute we saw where we were sitting, I told Renisha – watch. Major celebs will be entering through this area. And I turned out to be almost right! More on that later. 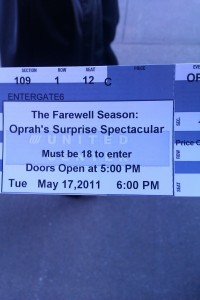 Can I just tell you it was SO HARD not writing about this as soon as it happened. I wanted to, but because of Dove’s fantastic relationship and 17 year history of working with The Oprah Winfrey Show, the last thing I wanted to do was spoil ANYTHING online. During the show my phone remained off, and after the show all I could say was this.

So when I finally got home and saw that the whole thang had been livetweeted and spoilers were posted by every media publication around the WORLD, I was like….dang. Not a single surprise was left! The show will finally air today — this morning in Chicago, and this afternoon in the rest of the country. Allow me to tell you my five FAVORITE moments from Oprah’s Surprise Spectacular! 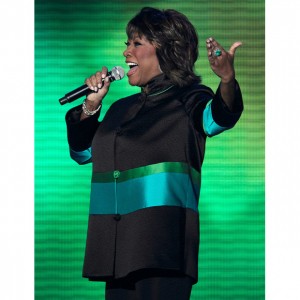 1 –From the moment Tom Hanks took the stage, we knew we were in for something special. And then Tom Cruise surprised Oprah. And then that little girl from America’s Got Talent was joined by Josh Groban. And THEN Miss Patti LaBelle blew the roof off Over The Rainbow — and kicked her shoes off when she hit the high notes — all within the first ten minutes of the show! Patti gave LIFE!!

2 — The whole show was just a cavalcade of stars. Tom Hanks seems like a really genuinely sweet man. Tom Cruise and Katie Holmes came across as the Hollywood couple I thought they’d be. Halle Berry and Queen Latifah are gorgeous and seemed so delighted to be there. Diane Sawyer is beautiful and dignified. Madonna was funny and came across as such a cool, regular lady. For the show’s part 2 (which airs tomorrow) Maya Angelou was SO inspiring. Jada Pinkett-Smith is so gorgeous, so tiny, and so stunning. Will Smith is as goofy and hilarious as ever and it was refreshing reminder that he’s not just an A-list actor who kicks butt in action movies. He is now and forever will be The Fresh Prince. I am ready for more Will Smith on TV, just being his funny, silly self. I think I preferred the second part of Oprah’s Surprise Spectacular to part one. Is that blasphemy? It was all amazing, but part two touched me in a special place! 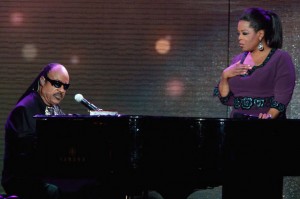 3 — I can now scratch one thing off my bucket list, thanks to Oprah’s Surprise Spectacular. I grew up on Stevie Wonder’s music, and I’ve ALWAYS wanted to see him perform live. It’s been on my list of dreams for a long, long time. I heard rumors that Stevie would perform for Oprah, but I didn’t expect Isn’t She Lovely AND a special song that I believe was previously unreleased. Stevie admitted that he knew it was unscheduled, but God was telling him to perform this song, which was originally written for his mother. Stevie never got to perform it for his mom before she passed away, so he changed the lyrics and sang it to Oprah. I was absolutely verklempt during Stevie. Thankfully there was a box of Kleenex for everyone in attendance at the show! 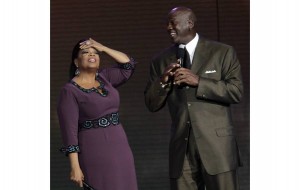 4 — I mentioned earlier that I sat near a major entrance? I was right and wrong about it. A few celebrities did enter the arena through that entrance — Michael Jordan was like two feet away from me at one point and that was AMAZING!!! But because I sat near that entrance I was able to appreciate one of the surprises that touched Oprah’s heart the most. Maria Shriver and Gayle King spoke so touchingly about Oprah’s emphasis on education, and how that’s been such a mission of hers over the years. In her career, Oprah has provided primary, high school, or college level education for over 60,000 people around the world. And then Tyler Perry took the stage, specifically to speak about Oprah’s support of Morehouse college. 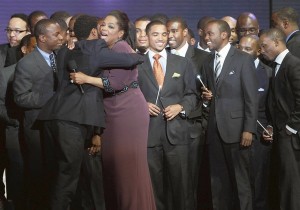 As Tyler Perry spoke (and Oprah was facing him), what seemed like HUNDREDS of Morehouse men came out of the entrance right in front of us. Each was holding a single light, and they surrounded the arena and filled the stage. It was an absolutely magnificent moment to witness, and it brought Oprah to tears.

5 — The musical performances were OFF THE CHAIN. I didn’t love Beyonce’s Girls until watching her kill it not once, but TWICE. Beyonce is a beast. The fact that she does performances that are so physically demanding while wearing six inch heels? I just don’t even understand it! She’s AMAZING. Following Oprah and last night’s Billboard performance…I’m in awe. All hail Queen Bey.

Stevie Wonder’s performance touched me in a special place, but Aretha Franklin brought the CHURCH to the United Center like nobody else could, and for me that was the BIGGEST surprise of them all. Aretha looked beautiful. She killed her performance. She made our hearts swell and then she brought the classic gospel singing and clapping to the United Center. It was such a beautiful moment. And then Usher closed it out with Oh Happy Day. The spectacular ended on such a meaningful note. All the celebrities from the broadcast came out on stage to celebrate the moment. 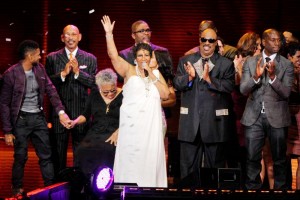 And then Renisha and I were like…waitaminute is that Tyrese? Where’d he come from? LOL!

It’s been a week since I was blessed enough to witness this all, and I’m still in awe. Thank you, Dove for making this dream come true! I can’t wait for you to see what I saw — the two parts of Oprah’s Surprise Spectacular airs today and tomorrow. And Wednesday will be the last ever episode of The Oprah Winfrey Show. It aches to type that!

Are you feeling down about Oprah’s last show? Planning a viewing party? It’s about to be the most highly watched tv show…ever, I’d guess!

As far as I know, all photos here were taken by official Oprah photographer George Burns, and I sourced them via Reuters, the Chicago Tribune, and the Telegraph UK.