There’s a cycle that happens in the advertising world. It goes a little something like this. Company goes to ad agency to create a new ad campaign intended to speak to the African American demographic. Ad agency comes up with something that runs the risk of offending the target audience. Ad gets released into the public anyway. Ad meets predictable outrage, especially online and in social media. Company is forced to publicly apologize and possibly pull the offensive commercial they likely paid big bucks for.

It’s a frustrating, annoying, totally avoidable cycle. And it keeps happening. Popeye’s Chicken. McDonald’s. Summer’s Eve. And now, Nivea. I haven’t even been blogging about this drama, because all of this outrage makes my soul heavy.

In case you aren’t up to date on the scandal du jour, let me fill you in really quick.

The latest Nivea ad was created by Draftfcb. It features the slogan “Re-Civilize Yourself,” and features a handsome, clean cut black man holding a mask of what’s meant to be a “caveman,” as if he’s going to hurl it away from him like a discus or something. It’s part of Nivea’s “Look Like You Give A Damn” campaign, which features super cute model BJ Williams in this particular advertisement. The caveman head has big, shaggy natural hair, what looks to be slightly darker skin, and a beard. Basically it looks like the model took off a Questlove Halloween mask. This ad sends the message, having natural hair = uncivilized. 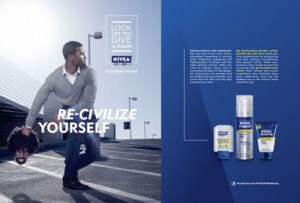 Look at this epic fail. It’s the kind of thing you’d see on Kiss My Black Ads, right? This will someday be in a textbook of what NOT to do in advertising. I can see it now.

Wouldn’t you think somewhere along the line, someone would have said to themselves and/or their coworkers, “Hey, it occurs to me that this ad could be seen as racist. Especially since we used the phrase “recivilize yourself” only in this ad. People might feel some kinda way about that. Plus, there have been several other recent controversies with ads that were construed as racist recently. Maybe we should play it safe and just use the ad with the white caveman instead, because it’s less potentially offensive. Or the other ad with the three models, that just says “Look Like You Give a Damn.” That’s arresting enough and won’t offend anyone”.

You’d think someone would say that at the ad agency, or at Esquire magazine. Somebody. But nobody did.

The ad got printed in September’s Esquire Magazine, a friend of mine — the very cool Kyle Archer — saw the ad and tweeted a photo of it, sending the link to quite a few of his blogger and vlogger friends on Twitter. Boom went the dynamite. Now Kyle’s fingers are famous — the photo he tweeted even made the news on CNN.

Social media is a powerful thing.

Folks (including myself) tweeted their disappointment with Nivea for having this ad released. Twitter is made for moments like these. Some immediately swore never to use their products again. Some called for an instant boycott. Some started @ replying Rihanna, Nivea’s current spokesperson, like she had something to do with this (guess what? She doesn’t). And then the blog posts started pouring in, expressing varying degrees of outrage and anger. And Facebook had more of its share of angry wall posts — Nivea USA’s Facebook page was absolutely bombarded by offended, about-to-be-former fans.

“Thank you for caring enough to give us your feedback about the recent “Re-civilized” NIVEA FOR MEN ad. This ad was inappropriate and offensive. It was never our intention to offend anyone, and for this we are deeply sorry. This ad will never be used again. Diversity and equal opportunity are crucial values of our company.”

Now here’s the kicker. According to Clutch Magazine, a black man was the ad wizard who came up with this one. Wait, what?

While I’ve publicly declared that scandals like this make my soul weary and I’m pretty much over blogging about them…I’m still fascinated by and drawn into the cycle of outrage. I reached out to a friend of mine, who has asked only be identified as an “industry insider.” I had to ask — how do these obviously offensive ads keep getting made? Who’s to blame in this case, Nivea or the agency?

I reached out for a quote and my insider explained thusly:

“Normally, but not all cases, the ad agency makes the suggestion of the ads and other creative content. Agencies are in the business of selling creative content like this ad. It’s a very rare occasion that the advertiser is creating or even suggesting creative content. I can’t speak directly to this ad because at this time I don’t have all the details. Contacting advertisers directly does have a huge influence of what they do. Most actually care and I’m sure Nivea cares.

But very often it’s the general market advertising agency who are clueless. According to a recent study by StrawberryFrog, the disparity in hiring practices in advertising are dreadful. It is one of the most racist industries in america. And that is widely exacerbated by the very nature of the work they do. They are curators, purveyors and sometimes creators of pop culture. And given that, they constantly make these mistakes in huge ways. Look at Popeye’s Annie the Chicken Queen, Summers Eve talking vaginas and several other racist ad campaigns.”

My insider went on to add, “This really underscores the need for more multicultural agencies actively working in more categories. As the world changes and markets “emerge” and demographics merge, now more than ever, we should see the rise of agencies that accurately represent the human race as a dynamic and diverse entity with wide ranging sensitivities, proclivities and inclinations. Our current 1950’s models are increasing in importance and revenues, while waning in relevance and accuracy.”

Although in this particular case it seems that this ad was concieved by a black man, the dismal state of diversity in the advertising world has directly led to this cycle of offensive advertising. It’s like these people approach ads for a black audience very much like a 90’s comedian talking about race would have. “White people eat a hamburger like this **eats all neat and proper like** and black folks eat a hamburger like this! **cue wild hip hop influenced gestures while eating a hamburger.” And some of the most annoying ads pitched to black audiences come from agencies largely staffed by black people, proving that sometimes a lack of diversity can be damaging there as well. (Ba da ba ba ba, I’m loving this highly profane McDonald’s ad parody BTW).

So what’s the solution? Given this country’s long history of racist stereotyping, and the advertising industry’s reputation for a lack of true diversity, it’s time to truly work together and stop thinking you have to pitch to one demographic in a wildly different way than you pitch to the other. Don’t think in terms of having just one multicultural specialist, or a little multicultural department to craft ads tailored to your target demographic. Instead of having a department that strictly speaks to ethnic issues, make your whole staff truly diverse. Truly multicultural. Create an industry that is representative of society as a whole, where words like “minority” are quickly losing their meaning. And if you’re coming out with an ad meant to speak to a particular race and your now diverse and multicultural staff isn’t sure about it, then run that ad by a focus group. Then use another one just to be sure. Advertising execs, you’re in a position to break the cycle. It starts by opening your ranks, and opening your eyes.

Or you can keep on doing things as you’ve been doing, and the cycle continues. Catch y’all on Twitter, where surely another outrageous and stupid ad meant to target a specific race will be offending us all soon.

But that’s just what I think. What do YOU think? What have your thoughts been about the offensive advertising scandal du jour, bellas?

For other perspectives, check out these posts on Clutch, Necole Bitchie, Forbes, and Ad Age.