American viewers may be new to her, but Trinidadians around the world have already come to expect great things from Anya Ayoung-Chee. 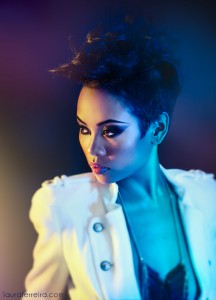 As Trinidad and Tobago’s representative in the 2008 Miss Universe pageant, she showed the world the diverse range that Trini beauty comes in. As a woman slandered and disparaged during a scandal that would bring most people to the brink of a breakdown, Anya demonstrated grace under fire. And now as one of the strongest contenders who may be poised to win the current season of Project Runway, Anya Ayoung-Chee has re-written her own script. She’s now the beauty-queen beautiful Caribbean designer who shut the naysayers up with her talent.

On a recent trip to New York City I was able to catch up with Anya on a phone interview. I didn’t quite know what to expect. Would we be able to connect via phone and have the meaningful conversation I was hoping for? Or would it be all flash and fun without substance? I’m pleased to report, it was the former. Anya is beautiful, yes. She’s talented, yes. But she’s also very smart and surprisingly funny, and super likable. Win, win, and win!

In the 35 to 40 minutes that we chatted, we covered a wide range of topics, from island accents to the reality behind reality television. Here’s what we discussed, topic by topic.

On Meiling as mentor

If you’re not a Trini, you may not know who Meiling Esau is – so allow me to educate you. Meiling is THE premiere Trinidadian designer. Mama Bella has been a client of hers for thirty years. Meiling allowed me to help design my graduation dress, and she came to Miami to fit me into my wedding dress (which she designed). She’s an incredible woman who has meant a lot to me and my own family. And she’s meant even more to Anya and the Ayoung-Chee family. Meiling nurtured Anya’s ambition of being a designer long before Project Runway was a possibility, and she advises her on more than just fashion – Meiling offers expert counsel on life, love, and building a brand. When I told Anya that I think Meiling sees her as more than just a mentee, she agreed. “Meiling is like my mom. I remember sitting in her foyer in 2008 and telling her I wanted to have my own fashion line and she just said — let’s do it. There is no ego or competitiveness there and perhaps from others there would be. She has been supportive to the nth degree.”

On life in Trinidad versus life in New York

It can be hard to admit, but some of the opportunities you get abroad are so big, it’d be impossible to get them at home in the Caribbean. Anya recognizes that she could actually do a greater service to Trinidad and Caribbean fashion in general, if she stays in New York for part of the year. “I can travel to LA, to London, far easier from NYC than from Trinidad.” However it was refreshing to note she gets just as homesick as I do!

On winning the fan favorite contest

On Twitter, fans were blowing up the timeline with the hashtag #PR9Anya, in the hopes of winning Anya the coveted Fan Favorite prize — which she WON! Last night! The money Anya won will go to establishing a loan incentive program for up and coming Trinis in arts and entertainment. Anya made sure to stress that it’s a LOAN program, and the idea of offering a loan they’ll have to pay back reinforces that there is art but there is also business and creatives have to be aware of that reality. Anya remains very aware of the fact that fashion is art but it’s also commerce.

On the Trini accent

I remain very much aware of the fact that my own Trini accent is like a tortoise — it is slow to emerge and tends to hide inside me, unless another Trini or Caribbean person is around and then it comes right on out. This has been my unfortunate reality since migrating in 1998. Anya’s accent remains as gloriously strong as ever, and it’s something people comment about often. “Nobody remarked about my accent on the show — the head AD would always poke fun at me in a playful way by using this ridiculous Jamaican leprechaun accent! But there’s a few things people talk about all the time and that’s one of them. It’s so funny to me because my brothers have a much stronger accent and heavier dialect than me, but I was worried my accent would sound too posh. I went to Convent and I can’t help it!”

On her success and her brand

Although Anya is very much blown away by the success she’s enjoyed and the show of unity Trinidadians have shown her at home and online, she remains very much focusd and aware of what she wants her burgeoning brand to be, “All the things I’ve wanted to do in Trinidad, I’ve done. I want my brand to be an international brand. Jewelry, perfume, shoes. I’ve always wanted that. I want my brand to be one that represents me and the islands. I look at Calypso St. Barths and what they do to represent the Caribbean — I want to do things like that. Like a Tory Burch.”

Regarding the reality of “reality television”

If you’ve been watching this season you’ve noticed that as we approach tonight’s season finale, the claws have come out. Tensions are high. Competition is stiff. But behind the scenes, Anya reveals that the friendships forged on this season of Project Runway remain real and strong. “It was very intense to me to see something so heavily manipulated… The 16 of us were THERE and we have the benefit of knowing how things really happened. Everything on TV is a fraction of what it was really like, edited for maximum drama. They barely show how much FUN we had! Joshua is great, Anthony Ryan is a gem of a person, and Laura is fantastic. I made genuine friendships there.”

On who wins Project Runway

I knew better than to ask her, so I phrased my question coyly. I told Anya that regardless of who wins or loses Project Runway, showing at New York Fashion Week is major and her life would never be the same. In that regard even if she loses, she’s already won. She remained tight lipped on the subject. Anya just gave a knowing laugh and said “Definitely.” 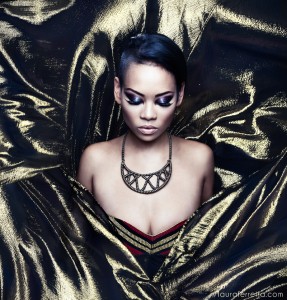 I’m rooting for Anya tonight and I know all of Trinidad is too! It’s hard to put into words how proud she made us feel as a country, how proud she’s made the Caribbean as a region. Even if she doesn’t walk away as the winner of Project Runway tonight, her future is beyond bright. And now the world at large can look to the islands as a fashion destination in their own right. If that isn’t a victory, I don’t know what is!!

**edited 10/28/2011 — if you watched last night, you already know. Anya Ayoung-Chee won Season 9 of Project Runway, and now celebrities are already contacting her for clothing. Her future is SO bright and I’m really excited for the future of Caribbean fashion as a whole!!