“”The stain of racism and sexism is not just for people of color or women. It’s ALL of our burden. All of us… I don’t care how ordinary you may feel, all of us can inspire change. Every single one of us.” 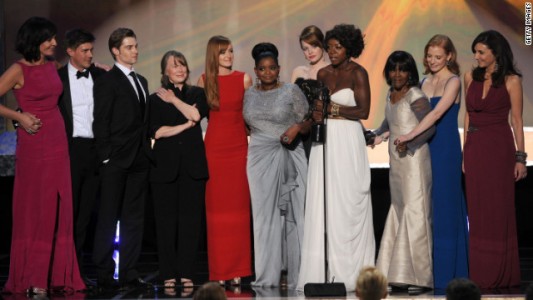 Those were the poignant and wise words uttered by Viola Davis tonight, who was resplendent in Marchesa as she shared the stage with the cast of her film The Help. Alongside her cast mates Octavia Spencer, Emma Stone, Sissy Spacek and the legendary Cicely Tyson, Viola Davis was gorgeous and glorious and spoke so eloquently for her cast and in celebration of the women who helped to inspire The Help.

It was a beautiful moment, and that capped off an epic night at the SAG Awards for The Help. It proved to be an extra special night for Viola Davis. When she won her individual prize for Best Actress, she offered words of inspiration to kids who currently attend the middle school and high school that she did in Rhode Island – “Dream big. And dream fierce.” 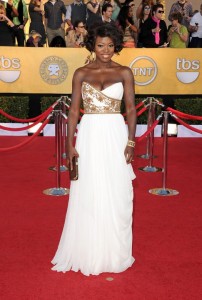 Viola may have won the award for best dress of the night, BTW! She looked GORGEOUS!

Octavia Spencer was visibly, genuinely moved by her victory, which came early on in the awards ceremony. Spencer looked beautiful, elegant, and safe in her lilac/greige dress by Tadashi Shoji. I wanted to see a touch of boldness, a pop of color…but she looked lovely nevertheless! 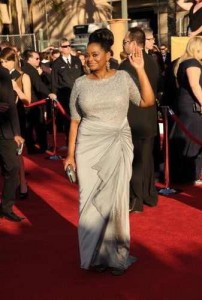 She first explained why this was an honor greater than herself by saying “these women represent our mothers and grandmothers. By honoring me, you’re honoring them.” She then dedicated her award to slain civil rights activist Medgar Evers, and to women like those she portrayed in the film: “…the downtrodden, the under-served, the underprivileged, the overtaxed — whether emotionally, physically, or financially.”

I haven’t yet seen The Help. I’ve avoided seeing the film in the wake of all of the controversy. But now I am in full on Academy Awards preparation mode, and predictions are already being made for Oscar victory for these incredible actresses. So I’ll be seeing it soon!

« Sanaa Lathan on Natural Hair, Hollywood, and Being the New Face of Pantene
Beauty in Trinidad — Local Products and Where to Shop »