In the interest of furthering the Afrobella Art series under a knowledgable and well curated eye, I’ve turned over the reins to a new monthly contributor. Bellas, meet Veronica Marshall. She is a self-described interior design junkie, obsessed with all-things home décor, antiquing, midcentury modern design, and collecting art by emerging artists. The owner of So Noted Designs — a soon-to-be online stationery boutique — Veronica loves photography, typography, stationery, cooking, natural hair, cycling, and writing. You can follow her home décor and lifestyle inspiration on Pinterest or view her photography on Flickr.

Peggy Cooper Cafritz is an internationally recognized art collector, historian and conservator of African and African-American art. Amongst her extremely notable achievements — she founded the Duke Ellington School of the Arts in Washington DC, and continues to serve the school. From 1979 to 1987, she chaired the D.C. Commission on the Arts and Humanities, and in 1993 President Bill Clinton appointed her vice chairperson of the President’s Committee on the Arts and the Humanities.

Peggy Cooper Cafritz was the youngest person ever selected to serve as a fellow at the Woodrow Wilson Center for Scholars, she has earned both Emmy and Peabody Awards for her documentary work at WTOP-TV, and earned another Emmy for her work as an arts reviewer on WETA-TV’s Around Town. In November 2000, on a platform stressing the importance of academics, athletics and the arts, Cafritz won election as president of the D.C. Board of Education.

Over the past two decades, Cafritz accumulated more than 300 sculptures, paintings, photographs and other pieces often from artists whose careers she has personally nurtured. The collection included the works of 19th- and 20th-century painters like Edward Mitchell Bannister, Jacob Lawrence and Romare Bearden and contemporary work by artists like Hank Willis Thomas, Nick Cave, Kara Walker and Kerry James Marshall.

Cafritz has been profiled on Oprah.com, in USA Today and the New York Times, among other publications.

In July 2009, Peggy lost her entire art collection due to a fire at her Washington DC estate. Reports estimate her home alone was worth $5.2 million. Media reports did not list the price of the art collection, although Cafritz notes that it was priceless. She is the perfect person to discuss the finer points of building — and re-building — a stellar art collection.

Veronica Marshall interviewed Peggy to get the finer points on starting a collection of your own. Take it away, Veronica!

I don’t know about you, but I love the month of February. Although I celebrate my “blackness” all year long, I love Black History Month because it always brings with it some of the best music festivals, movie screenings, lectures, and art exhibits. However, this year, I’m celebrating with a little retail therapy – I need art for my new home. 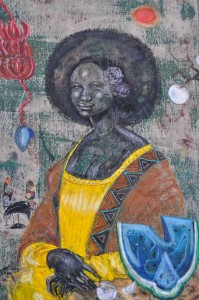 If you’re like me, you’ve realized that starting a collection can feel overwhelming and it’s not always affordable. The good news – art doesn’t have to be expensive, and finding great artists is easier than you think.

Peggy Cooper Cafritz is an avid collector, advocate of the arts, and patron of young artists. After two decades of collecting African and African-American contemporary art, Cafritz knows how to curate an artful home.

Here are her must-follow tips for getting in the know on up-and-coming artists and how to invest in their work:

1. Develop an eye for what you like. “Anyone can collect art,” says Cooper Cafritz. “Trust your instincts and buy artists who really grab you. It’s also very important not to be intimidated by what someone else collects or someone else’s collection.”

2. Buy from students at art high schools. “Many cities have high schools for the arts and they often have exhibitions where art is for sale and it’s not very expensive.”

3. Start by collecting posters and/or prints. “Look for posters and print reproductions of more expensive, highly sought-after artwork.” Our advice: you can also check out national and local newspaper archives for inexpensive photography worthy of framing.

4. Go to as many local exhibits as you can. “Identify up-and-coming artists that you like and begin to follow them – buy their work and then follow them throughout their careers.”

5. Buy an artist’s work early. “Buying artwork at the start of an artist’s career makes a big difference, the biggest difference. Many of the pieces I own I bought early in the artist’s career; many of them would be out of my reach today.” A few artists topping her list are Nicholas Hlobo, Angel Perez, and Jordan Cash-Cooper. 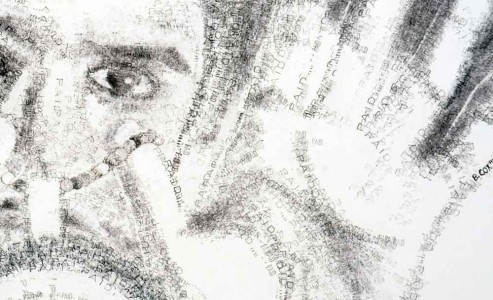 If you’re looking to buy art on a budget, here are two additional tips that have worked for me. First, negotiate, negotiate, and negotiate. Artists love to create but they love to sell their work more, so ask if there’s flexibility in their pricing. Second, if you can, always buy direct from the artist. Galleries have to pay the bills and to do so they charge a markup on the work they sell.

So now that you know the “how,” here are a few artists we are following:

Tell me who your favorite artists are. We may just feature them on Afrobella.com!

« I’ll Be In NYC During Fashion Week with Curls Unleashed!
We Will Always Love You, Whitney Houston »