Oscar Weekend, Here We Are!

I grew up watching the Academy Awards. I remember sitting on the carpet in my parents’ bedroom, watching Billy Crystal sing and dance about every Best Picture nominated film. I remember that year with Rob Lowe and Snow White (definitely earns its place on this list of Oscars Most Bizarre Moments)!

I remember being enthralled by the magic and the dresses and the elegance of the stars. I don’t remember ever even one time thinking to myself…someday I’m gonna be there too. Me? A little girl who grew up in Trinidad and Tobago? I never even entertained the possibility.

And yet…here I am!!! Luvvie and I got to Los Angeles last night. We’re staying right in the middle of ALL of the action. We’re going to be covering red carpets, doing interviews with as many celebs and industry insiders as possible. We’re here to live tweet and officially cover the events leading up to and including Hollywood’s biggest party and most special night.

How did this all HAPPEN? An incredible Hollywood producer by the name of Stephanie Frederic loves our work. She thinks Luvvie is HILARIOUS and loves her awards show coverage via Twitter. She loves my blog and that I speak directly to women all shapes, ages, sizes and shades of beautiful. And seeing as this is basically year of the woman at the Academy Awards…it made sense to bring us on board to add color to the carpet, diversity to the coverage, and social media interest to this most venerable and well respected of Hollywood events. We are part of Stephanie’s production team to cover the Oscars and the pre-Oscar events, and loving every moment of it!

On Tuesday morning, we appeared on WGN TV with Dean Richards during his entertainment segment, and shared our story. Click to watch — two Chicago bloggers attending the Oscars!

Dean Richards, Luvvie and me on the WGN set! Click to watch!

When we got into our hotel rooms last night, our beds were decorated with Oscar gear, including a real piece of the Academy Awards red carpet!!! 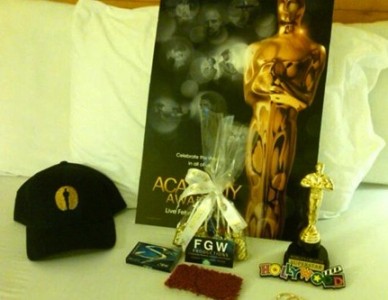 I still can’t believe it. I’m gonna be pinching myself on Sunday!!

After Sunday, I’ll be telling you ALL about EVERYTHING we saw, experienced, photographed…the journey to find the perfect dress….ALL of it! Stay tuned for All Oscar EVERYTHING!!!!!

SanTara says:
This is so AWESOME!! I'm really excited for you and Luvvie. A well deserved blessing for all of your hard work. It's so wonderful that you have a sisterfriend to share this moment with. Thank You for taking us along for the ride. :) XOXO

Beez says:
So excited for you! I can't wait to read your coverage!

pets says:
MaBella says this is fabulous and she wishes Luuvie and yourself success! Love always

Anya says:
This is just so wonderful! I'm happy and excited for you and Luvvie and I will be following your Oscar reports- and I'm not even into the Oscars :-) xoxo Anya

ria says:
BIG CONGRATULATIONS! Looking forward to even greater things! Go on with your bad self-lol

LoveBrownSugar says:
Amazing Patrice!! Congrats to you both, live it UP :)

I Am Your People says:
*inserts haterade here* Honestly, I'm so happy for you and Luvvie. Can't wait to read the live tweets! Please post what you're wearing on the red carpet

b_baby says:
Wow so exciting - it's going to go so fast, be sure to take a moment to soak it all in. Chicago is proud of our "Island Girl"!

Dad and Mom says:
Very proud of you and Luvvie and special thanks to Stephenie who believed in your work and capability. Soak it in and enjoy. You deserve to be there. You are very special. Love always, Dad and Mom

Nicole says:
Couldn't be happier for you. You deserve it! I love your work.

pets says:
Congrats to you both! Just saw that you have official Twitter name for this show. Great!Can't wait for Sunday night.

BeautyXchange says:
This is huge Patrice! Congratulations!! Luvvie is hilarious, I discovered her through your blog a couple of years back. Have a great time in LA.

jewel says:
So happy for you and Luvvie! HAVE A BALL!

sandra says:
Congratulations to both of you. Hope you have fun and get to meet some awesome people. Remember "lead" the news and don't follow. If you do any interviews or commentary, remember the world gets lots of negativity all the time; but what people want is to be uplifted! Take on the town.