So if you read this blog or follow me on Twitter, you probably have noticed a lack of posts on a very popular topic. That would be reality TV. I don’t watch it. I guess I used to, when Idol first started, but I think I stopped watching that show after Fantasia won. I watch Project Runway and Fashion Star…but not the non-competitive kind of reality shows that center around people’s lives, usually. I’ll try to watch what everyone else is tweeting about, but we have one TV and usually there’s a basketball game and my husband is like “c’mon the game is on,” and…yeah. I generally tend to steer towards programming that informs and uplifts me. And that isn’t usually what reality television does, IMHO. A few shows do, but most don’t.

But recently I attended a brunch in Chicago, where I had the opportunity to get a first peek at Mary Mary, a new reality show that will premiere tonight on WE TV, at 10 PM ET/PT. It was a lovely event, involving key members of Chicago’s media. I may have been the only blogger invited, which is always interesting! 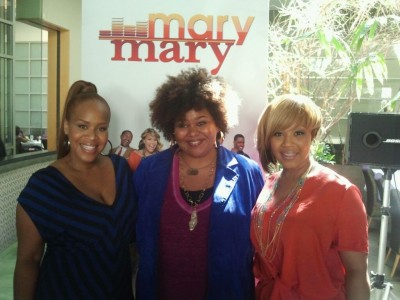 As a program, Mary Mary is positive, uplifting, super cute, and still entertaining and engaging. I really enjoyed the episodes we watched — that you’ll be seeing tonight if you watch. Erica and Tina — the sisters behind gospel supergroup Mary Mary — are so cool. When I met them, Erica said that she’s read Afrobella and likes what I do! YAY!

As a reality show, Mary Mary is closer to a Run’s House or Snoop Dogg’s Father Hood, than to a Basketball Wives or RHOA. It’s about family, balancing work with the kids, finding ways to be together when your career’s pulling you in opposite directions, the behind-the-scenes reality of being working musicians, and of course Mary and Erica’s Christian upbringing centers their family unit. If you’re tired of seeing women slap and cuss and throw drinks in each other’s faces, this is the reality show for you. I found it quite refreshing.

Check out Mary Mary’s premiere episode tonight on WE TV.

Are you fans of Mary Mary’s music? Shackles is still the JAM!

« Style Counsel – How To Pull Off Pleats
Williams Sisters Are Doing It For Themselves! Bellas, Behold The Fly Cut! »