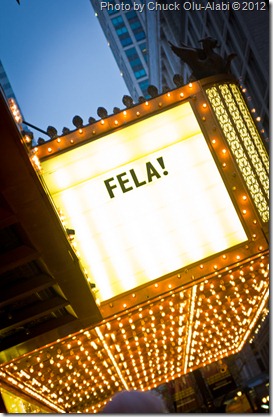 The musical is currently in Chicago until April 15, and I HIGHLY suggest you go see it while you can, before the cast moves on to Boston, Baltimore, Houston and St Paul. Click here to get your tickets, and use the code AFROBEAT to get 30% off! 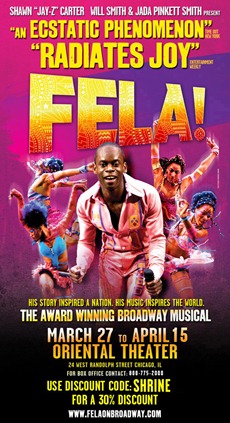 I’ve been familiar with Fela Kuti for many years now – I’ve enjoyed his music and I’m aware that he created the musical genre, afrobeat. But I didn’t have the privilege of seeing Fela perform live. I didn’t know the true, glorious, booty-shaking, thought provoking, soul stirring level of musical performance that Fela Kuti was able to deliver to his fans around the world. Until I saw the Broadway reproduction.

After seeing the play I felt moved and at a loss for words. I felt like I’d just had an experience that I needed to share with the world, like some kind of town crier. I couldn’t express what I loved the most – the incredible music, the costumes and makeup, the dancing, the plot….all of it simmered together in the most delicious cultural stew. 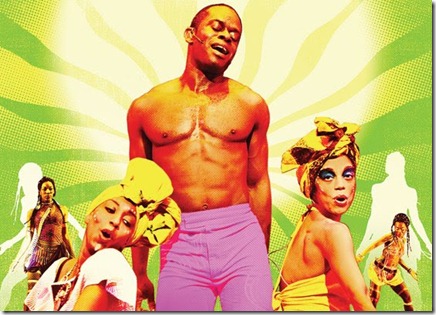 I came home and posted on my Afrobella Facebook wall, Fela was EVERYTHING. And then someone on my Facebook page then asked – Bella, who is Fela?

That bummed me out a bit, for two reasons.

#1 – this is what Google is for! Google is your friend. Don’t be afraid to inform yourself first. The same amount of time it takes to ask that question, could be spent simply looking it up. Educate thyself and be FREE. Knowledge is power!

#2 – More people need to know who Fela Kuti is. He was a creator of music, a voice of courageous political dissent, and a champion for culture, knowledge and freedom.  For a great perspective on his life and how this Broadway production came to be, read Luvvie’s piece on Ebony.com.

And if you’ve not only never heard of Fela but never heard Fela’s music – check out two of my favorites. Water No Get Enemy is on one of Fela’s most celebrated albums – click to read the title and the explanation of that! This is Fela’s version.

And here’s what you’ll see if you go to see Fela! on Broadway.

“Water No Get Enemy” from FELA! Original Broadway Cast Recording from Fela Kuti on Vimeo.

That video gives you just a taste of the theatrical experience. It was PHENOMENAL.

I was lucky enough to get to see the play after meeting Fela Kuti’s muse, Sandra Izsadore – here we are in her hotel room! 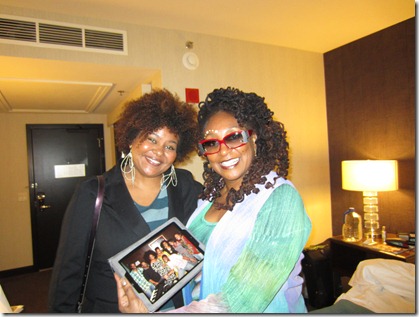 Sandra is an incredible woman and it’s easy to see why Fela cared for her, and why she influenced him so greatly. She’s an incredibly thoughtful, self aware, politically and socially conscious woman with so much knowledge to impart! It was truly an honor to get to know her. And then to see her being depicted on stage – incredible! Thank you, Sandra!

Fela! is a theatrical experience unlike anything I’ve seen. The music moves you to dance – and at points in the show, audience participation is a must! The dancing is sensual, incredible, inspiring. The voices in this production were so vibrant and had such range – Melanie Marshall’s voice is a force of nature. I fell head over heels for the costumes, hair, and makeup worn by Fela’s Queens. See the look in this photo via the New York Times. 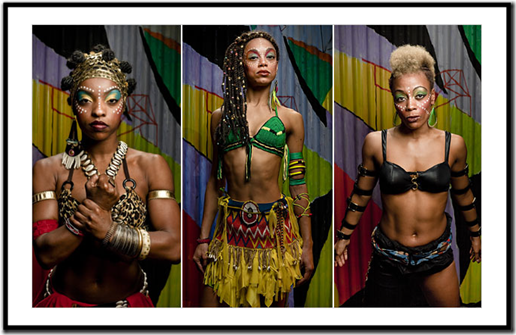 The makeup was designed by legendary Broadway and stage hair and makeup designer Cookie Jordan, who went into detail about the intricacies of wig making and makeup in a phone interview I had with her this week.

“The wigs are quite valuable, $30,000 worth of wigs are on the stage. Each wig is custom made for the actresses. All Broadway wigs are custom made,” she explained. “The Queens wore white dots of acrylic paint, they used lipstick as blush. And these dancers sweat, so you need a product that lasts.” Most of the makeup used for Fela! is by MAC. “The visuals of the show are so incredible, and you’re struck by the difference of the beauty. It’s a different aesthetic. These women, the Queens, are the heart of the play. They encourage women who come to see the play to embrace themselves and their own beauty. Many of the actresses began to go natural, after working on Fela!”

I could totally understand why. The play holds that much power. After seeing Fela, I wanted to dance, to sing, to frolic in the streets and tell everyone I saw to GO SEE IT. But I didn’t do that. Instead I wrote a blog post, and I’m telling you! GO SEE IT!

Fela is currently in Chicago until April 15, 2012.After that it moves on to:

Thanks to Jada Russell of  HighStyle Marketing and to Sandra Izsadore for taking such great care to make sure I could experience the magic and majesty of Fela – withoutyou both, it wouldn’t have happened.

« What To Wear to a Spring Wedding
Bright, Fun, Bakers Shoes on State Street! »