This post has nothing to do with Lil Kim. And everything to do with coming face to face with your TV faves. I’m a big fan of The Daily Show, so when my friends at Dove told me the April Truth Day they wanted me to come to NYC for was being hosted by Samantha Bee, I HAD to go. 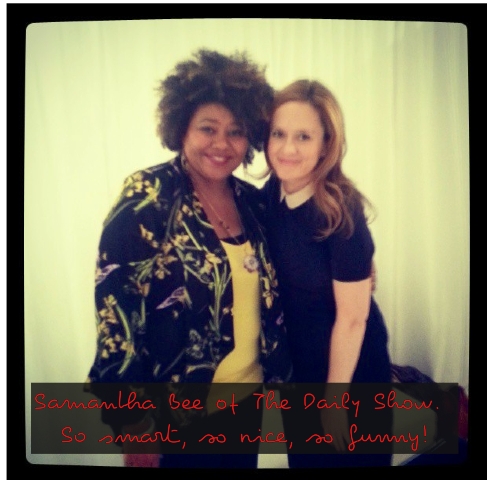 Do you watch The Daily Show, bellas? If you do, you already know Samantha Bee as their intrepid correspondent who bravely interviews politicians and newsmakers, tackling tough subjects with assumed, deliberate and brilliant insensitivity and ignorance. And when she isn’t reporting on stories about current affairs, she’s doing stuff like striding around Times Square, interviewing folks in a faux-shower for Dove.

I had to ask her about that, and more. And it’s so cool to come face to face with someone you watch often on TV, only to discover that behind the comedic veneer is a sweet, friendly, down to earth, nice person.

Samantha Bee is Canadian, and I was curious as to whether being an outsider to politics here lent to her perspective on the issues that separate our countries, like health care or gun control – stuff like that. “I think so, to some degree. It can be disconcerting being an inside-outsider. There are tons of cultural similarities, but we’re also totally different. It’s interesting how it informs society.”

Samantha gained a reputation on TDS as being the “always pregnant lady,” as Olivia Munn referred to her.I had to ask her about being a mom and it turns out her Wikipedia entry could use some editing for clarification. Samantha Bee and her husband (and fellow TDS correspondent) Jason Jones might have joked once about having kid #4, but it certainly isn’t happening, ever.

“Jason had a real vasectomy on The Daily Show! So Wikipedia is wrong, they should add that. How do you fix a Wikipedia entry?” As someone who had a Wiki page for all of half an hour, I have no idea.

We chatted about our mutual love of Dove. My history with Dove love goes back a ways, but not as far as Sam Bee’s. “My grandmother used Dove, t was her brand. So I’ve used it since I was a child, before I could even remember. Forever. And I use it on my kids, too.” 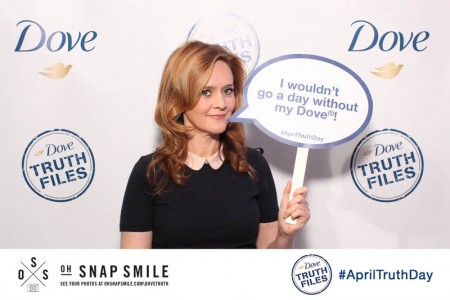 Since Samantha had asked so many women about their shower habits on Dove’s behalf (see video above,) we discussed our own shower routines. It turns out, I over shower – using both a bar and a liquid soap cleanser. I also luxuriate, listening to my Shower Songs playlist while I get clean. Samantha is the mother of three little kids. She has zero time to herself. “I do hair first. Hair, out of the way. I feel like then I do these parts (rubs torso) and then these parts (goes lower). Then I have to get out ASAP because a child is banging on the door. Or even worse, it’s too quiet. When it’s too quiet, something’s wrong.”

I had to ask her how she does it all. I don’t even have kids and I feel myself struggling with work/life balance issues. How do you figure out a work/life balance when you’ve got a husband, three kids, and a high profile job on one of television’s most popular programs?

“The secret is, don’t try to do anything very well. Give everything like, 75%,” she says in her usual comedic deadpan. Then she gets real. “I don’t know. Work/life balance? I just do the best that I can. Sometimes I just throw everything to the wind.” Samantha Bee pulls out her cell phone and shows me a photo of her living room floor, absolutely covered in toys. “This is my reality. That’s a good snapshot of what it’s like at our house.” And that made me feel better. We’re all trying our best, right?

Thanks to Dove for the opportunity, and thanks to Samantha Bee for being lovely. You can follow @Dove and @IAmSamBee on Twitter. And visit Dove’s Facebook page for more on the whole April Truth Day concept.

Disclosure: My trip to NYC was sponsored by Dove, but these posts weren’t – just in case you were wondering!