I literally just got home from the Tinley Park stop of the Oddball Comedy Festival, and normally I like to let my thoughts stew for a bit before writing a review, but I figure I should get all of this out right now while it’s still fresh. First, a tiny bit of backstory for anyone who’s missed the last few days in pop culture news.

There’s a comedy tour  by Funny or Die called the Oddball Festival that’s going around major American cities. The supporting headliners are a diverse and interesting collection of comics, including Demitri Martin, Hannibal Buress, Kristen Schaal, Al Madrigal and others in assorted cities. The main headliners are Flight Of The Conchords and DAVE CHAPPELLE. That’s right. Just about everyone’s favorite comedian is BACK, and on TOUR. Great news, right? Hold up, waitaminute.

On Thursday night, Dave Chappelle headlined in Hartford Connecticut, and from all accounts it was disastrous, and it had everything to do with the audience’s reaction. Some called it a “meltdown.” Others saw racial undertones in the crowd’s response, and pretty much predicted an end to Dave Chappelle’s already-too-brief return to the stage. Everyone was trying to figure out what happened.

After seeing Dave Chappelle kill the game tonight in Chicago, I think I’ve got some answers. 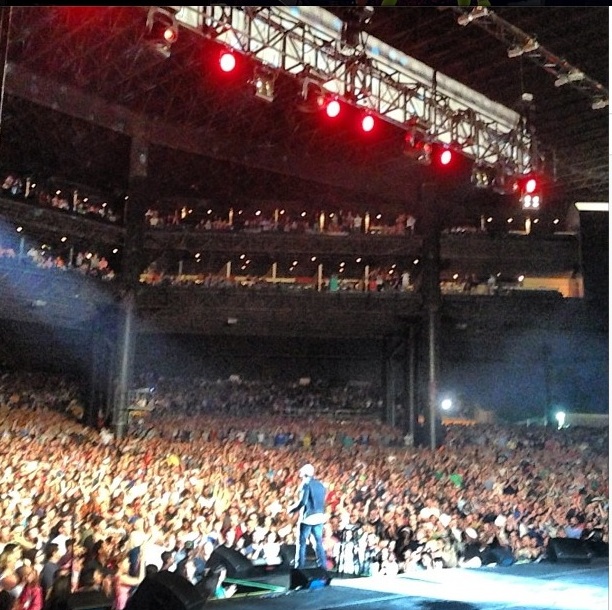 First of all, it must be hard being Dave Chappelle. You’re known and beloved as one of the greatest living comedians. Everyone wants you to go back to doing the things you used to do, even if you don’t want to (or can’t) do them anymore. And everyone’s waiting for you to make this big, impressive comeback. It’s not enough to just return to doing stand up – no. You’re expected to return at the top of your game and make everyone forget that you ever left. And now you’re headlining this comedy festival and everyone’s mainly excited to see you, and you’re the one getting all the big press about being on tour. Pretty much everything you do is newsworthy.

I’m just saying, the man’s got pressure on his shoulders. And you can sense it when you look at him. Dave isn’t as gangly and boyish as you remember. He’s bulked up a bit. He’s older. He’s clearly learned a lot from his experiences and it’s safe to say he’s a bit jaded from some of them. As he’s entitled to be.

Tonight on stage in Chicago, he came out ready and received nothing but love and respect. The security at the First Midwest Bank Amphitheater was super tight, and over the course of the evening we saw no less than three people get kicked out – two for trying to take photos with their cellphones. Drunken shenanigans and heckling were not being tolerated. That ensured that the audience was respectful during the sets. Also it appeared that the festival was being recorded, so here’s hoping we’ll all get to watch these acts on Comedy Central or something soon.

From the minute Dave Chappelle took the stage, he was ready to address the Hartford issue. He brought it up right away and let us know that Chicago was an immeasurably better crowd than the one he’d encountered earlier in the week. He ripped on the Hartford audience hard and for a good while. And I can’t say that he brought up any deeper cultural implications in what he’d encountered – the audience was drunk, rowdy and ignorant and the yelling frustrated Dave, but in the run of his jokes tonight he didn’t allude to feeling like there was a racist tone to what happened. He did make mention of Michael Richards and his infamous meltdown, and said that despite his feelings as a fan (or, former fan?) who felt disappointed in Michael Richards for his racist reaction, the comedian in him understood that he’d just had a bad night.

From clowning the heck out of Hartford to Michael Richards, Dave Chappelle then did some of the material I’d been reading about online – bits about his wife observing him telling jokes about her at a comedy club, jokes about his kid’s interactions at school and the lessons he’s teaching his children. Some of his material had a sharp, introspective edge to it. Some of it was just silly and loose and goofy (a lot of it involved strong language, which then made me wonder why so many people around us had brought their kids with them to this kind of show, but I digress).

At one point Dave got flat on the ground to chat with a security guard about what he learned from reading The Secret. Later in the set he discussed his love of hip hop but shared his shock at what kind of lyrics get radio play nowadays. Even the jokes he described as weak, killed the crowd. His set was raunchy and sharply observant, deep, poignant and always HILARIOUS. The glimmers of brilliance that made the world love Dave Chappelle to begin with were on display before the Chicago crowd.

From the Hartford incident we learned that Dave Chappelle’s contracted time is 25 minutes per set. In Chicago he was on stage for a bit longer than that, lingering to tell us stories about meeting Kanye West for the first time, and sharing Chappelle Show skits with him before they aired on TV.

I shared this via social media but I’ll say it again here – seeing Dave Chappelle on stage again felt so heartwarming and familiar. It was like seeing an old best friend who now travels a lot for work. It’s great seeing them but you almost don’t want it to end. Because who knows when you’ll get to enjoy their company again? The audience didn’t want Dave to leave. And when he finally did, everyone within my eyeshot gave him a standing ovation.

In Hartford on Thursday, Dave walked out to Kanye West’s New Slaves. Tonight in Chicago, he walked off to NWA’s Express Yourself. Since everyone else is reading his exit music like tea leaves, I’ll make a hopeful prediction. I hope that the experience in Chicago (and hopefully the experience on all the remaining cities in this tour) is what Dave Chappelle remembers when he contemplates a return to the stage or the screen. I hope he recalls what it feels like to be loved by an audience who’s here for your new, evolving persona and material instead of feeling reduced to a barrage of catchphrases. And I want to believe that he’ll come back to a larger audience in some capacity that fits his life and fulfills his creativity.

Whatever he decides to do, fans like myself will be waiting with baited breath.  After all these years, it’s hard to think of anyone else who does it better.

Tickets to the Oddball Festival are still available – click here to get yours. Hannibal Buress was awesome, and Al Madrigal was hilarious! Full disclosure – I’m not the biggest fan of Flight of the Concords or Kristen Schaal, but their fans seemed to really enjoy their material as well.

Have you seen Dave Chappelle’s stand up lately? Let me know your thoughts and experiences in the comments!