This week, I was invited to a special, press only screening of one of the most highly anticipated movies of the holiday season. The Hunger Games was one of the most popular book series of the decade, and the first film of the trilogy was one of the biggest movies of 2011. I got sucked into the phenomenon after seeing the first film. Before seeing The Hunger Games, I had resisted reading the Young Adult books that had become an obsession for so many people I knew. Immediately after seeing the first movie, I had to learn more about Katniss, Gale, Peeta and the world of Panem. 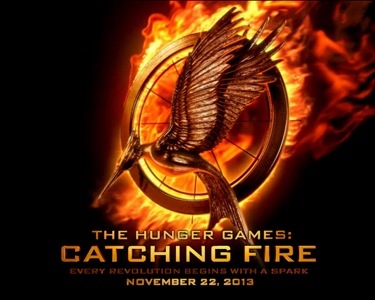 I was fascinated by The Hunger Games because of the deeper storyline behind the protagonists, the idea of a fractured futuristic world where the evil overlords of the Capitol could determine the fates of the Districts and society so ravenously ate its own young for the sake of this annual celebration of death. There’s something so dark and unique about the vision, but at the same time so familiar and so frighteningly resonant. I literally couldn’t put Catching Fire down when I read it, and I went into the screening with great anticipation. I even put together a look as a tribute (see what I did there) to the Hunger Games. Check it out! 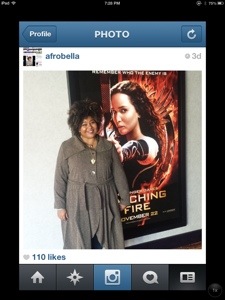 Coat and brown studded booties by Simply Be, arrow earrings by Peace Images, necklaces by Ija Designs and Bita Pourtavoosi.

The Hunger Games was an engrossing and enjoyable movie experience. I personally preferred Catching Fire as a film. Here’s why.

– the groundwork was all laid in the first movie. All of the complicated backstory and the understanding of the games and what Panem is, was accomplished in the first movie. So Catching Fire picks up where we left off and moves forward with pure plot and immediate, intense action.

– if you’ve seen the first film you already know and care about the characters and understand their struggles and their skills. The first kiss between Katniss and Gale was so much more poignant, knowing what led to that moment and what would lie in store for them both.

– the whole plot of Catching Fire is about Katniss womaning up and accepting her role as a leader, a warrior and a symbol of hope to the oppressed.

– there are some heavy scenes in this film that makes the message behind it all the more resonant. Katniss has been fractured by her first Hunger Games experience and she bears scars on her mind and her heart. She has been traumatized by having to kill and having to witness murders, from bearing the pressure and weight of expectation of all of the districts.

I just had an interesting conversation with a friend who confessed that he hated the first Hunger Games because of the emphasis on the love triangle between Katniss, Gale and Peeta. He said that he felt the important messages of the book were submerged by the romantic storyline. I didn’t necessarily feel that way but anyone who had that concern about the first film, would most likely enjoy the second one more. Catching Fire does deal with the romance, but it tackles the brutality of the Capitol regime and the effects on several districts. And it delves deeper, dealing with themes of the twisted nature of celebrity and how media can be used to skew perceptions, the danger of a hyper controlled society and the power of hope.

There are some outstanding acting performances in Catching Fire. Jennifer Lawrence is fierce and inspiring, and Liam Hemsworth is strong and so delightful to gaze upon. I saw this movie with Luvvie and she couldn’t help but comment on how classically handsome he is. Donald Sutherland is cold and terrifying as President Snow, truly a inspired choice for such a villainous role. I have had a thing for Woody Harrelson for years, and he is brilliant as Haymitch. Philip Seymour Hoffman is as talented as ever, and his role in the film is one to watch. And the new characters introduced in Catching Fire are also compelling and interesting. I loved seeing Amanda Plummer and the incredible Jeffrey Wright as Nuts and Bolts tributes from District 3, sent to play in President Snow’s evilly crafted Quarter quell Hunger Games.

I won’t give out any spoilers. I’ll just say its worth the ticket money and this film will do big box office at home and around the world. I loved it. I hope you do too.