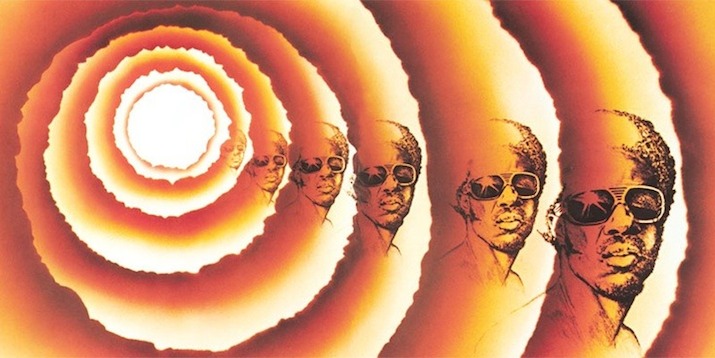 I grew up in a Stevie Wonder household, where we had Songs in the Key of Life on vinyl as part of our family musical soundtrack. So many of these songs bring back to vivid memories of joyful occasions and tough times. These songs have lifted me up and nurtured me through my upbringing. When I heard that Stevie Wonder was going to be going on tour to perform this album in its entirety, I absolutely HAD to be there. I’ve seen so many amazing concerts this year alone, but this one was different. This is Stevie. This is Songs in the Key of Life. Seeing him sing live has been on my bucket list for some time now. This was so, so serious you guys. Last night was the stuff that dreams are made of, for me. Look at HOW HAPPY I was as I entered the United Center! 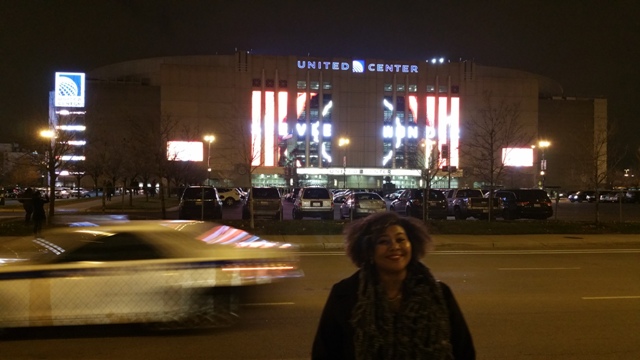 The audience at Chicago’s United Center was so beautifully diverse. Old and young, black, white, Asian, Hispanic – it really reinforced the universal appeal of Stevie Wonder. People came from all over just for this show – the couple sitting behind us had flown in from Minneapolis. Another couple had been to the New York show and came to Chicago to see him again. I’d say it was totally worth it.

There was no opening act. There was no need. We were there for Stevie and shortly after 8 pm, there he was, being guided onto the stage by India Arie. From the moment he sat at the keyboard, we knew we were in for a truly epic musical journey, a course first charted in 1976. I got chills from the very beginning of Love’s In Need Of Love Today.

It’s so amazing and beautiful and special and RARE to be able to just bask in the glow of songs that have meant so much to you for your whole life. To have flashbacks of the moments when these songs made their first impact on you. Have A Talk With God has been a personal rock for me during many rough times, and hearing it live in a duet with India Arie was so special and meaningful and deep. For Village Ghetto Land, a string orchestra on the side of the stage accompanied Stevie and the lyrics hit so hard. At the end he altered the lyrics to say, “Now some folks say that we should be/Glad for what we have/Tell me would you be happy – still, in 2014 — in Village Ghetto Land.” Moments like that resonated. It is sad that so many of Stevie Wonder’s lyrics, written almost 40 years ago, remain so achingly relevant. It is beautiful that he’s still here to sing them and express the ongoing urgency of the message.

I had read in the New York Times review that Contusion was a show highlight, and I definitely agree. Stevie Wonder’s band is full of virtuosos and the stage is a mass of people all playing and singing their hearts out. There may have been as many as 40 people on stage just jamming out. Four percussionists, two or three keyboardists, 6 backup singers with a backup choir for bigger musical moments – everyone performing at the best of their abilities. Contusion was the first of the songs I typically would skip over during a usual listen to Songs in the Key of Life, that I really enjoyed during the live show.

Feel it all over! His voice is perfection

The orchestra came back in full swing for Pastime Paradise, and then Stevie took to the keyboards for a sweet and gentle Summer Soft, which swelled bigger and bigger with emotion. So beautiful to witness. The funk of Ordinary Pain came to light as the backup singers amped up the sass – Stevie’s daughter Aisha Morris among the trio delivering those blistering lyrics. Saturn is another song I’d typically skip on Songs of the Key of Life but hearing it live gave me chills. India Arie took the stage alongside Stevie, adorned in a resplendent African necklace that made her look like a queen. I’d never really appreciated the beauty and depth of those lyrics but hearing Stevie and India sing about this distant planet where peace is the way of life really hit me on Friday evening. The last song before the second set was Ebony Eyes, one of my very favorites and the whole audience sang along.

During the intermission between sets, the audience was buzzing. We all knew what we were in for in the second half, and the excitement was TOO real. When Stevie returned to the stage he was led by his daughter Aisha and he told us the story of Isn’t She Lovely, which was written for her. He also humorously addressed the rumors about his latest additions – Stevie thinks it’s hilarious that people are so quick to believe any old rumor that pops up on the internet about him. For the record, he stated that he is NOT expecting triplets. Joy Inside My Tears was another revelation and it hit Stevie Wonder hard – he was visibly brought to tears during the performance, and I know I wasn’t the only fan who cried right along with him.

If I was PRESSED, I’d admit there were two low points for me during the second set. One was during Black Man, which is a wonderful song but the samples of the kids voices at the end was incredibly loud and shrill, and unpleasant through the United Center speakers. I’ll also admit that I’ve never been a fan of Easy Goin’ Evening (My Mama’s Call), so despite the virtuosity of Frédéric Yonnet, that didn’t do a whole lot for me. No worries, however. The second set was filled with incredible highlights. All Day Sucker is SO funky and hard hitting when performed live. Ngiculela – Es Una Historia – I Am Singing was a longtime favorite of mine but hearing it in a duet with India Arie elevated it into a universal anthem. If It’s Magic gave me chills, as Stevie Wonder performed alongside the original harp track by the late Dorothy Ashby and displayed a stunning black and white photo of her alongside the stage.

As and Another Star are amongst my very favorite songs of all time PERIOD, so hearing those performed live by a virtual orchestra of amazing musicians, led in absolute perfect voice by Stevie Wonder, was that bucket list moment I was dreaming of all along. I was so happy by the end of the album, I wasn’t even thinking about the encore – but for the Chicago audience, Stevie turned it up to eleven. Because of his longstanding love for Chicago, the city where My Cherie Amour first became a hit and where Fingertips was first recorded, he went all out for the encore. Declaring that he was no longer Stevie Wonder but was instead “DJ Tick Tick Boom,” he teased us with hit after hit. Do I Do. Master Blaster. For Once In My Life. My Cherie Amour. Signed, Sealed, Delivered. He played just enough to make the crowd scream for more. And finally, he closed with Superstition and we all went crazy.

Superstition! Stevie is giving it ALL tonight!!

This was Friday’s Stevie Wonder set list, courtesy of the Chicago Tribune:

1. Love’s in Need of Love Today

7. Knocks Me Off My Feet

At the end of the show, my husband and I got into a friendly debate. To me, Stevie Wonder delivered one of the very best concerts I’ve ever seen. As we headed to the car, I declared that he was better than Paul McCartney, who we had also seen at the United Center earlier this year. I stand by my words. It’s hard to think of another living artist who is so accomplished and has had such a longstanding career, who’s still able to stand on stage, sell out a stadium, and deliver a show of that caliber. Don’t get me wrong — Sir Paul is incredible, but having seen him twice I know that he tells the same stories and his show is pretty much a very set into place experience. Stevie Wonder’s voice is in incredible form, he played such a variety of instruments for us, and he displayed the range of his genius abilities as a songwriter and performer. Plus, these songs are the soundtrack to my life. I want to see him perform again and again and again. We’re so lucky to still have Stevie. If you have the opportunity to go see this tour, GO. You won’t be disappointed!

« How To REALLY Help A Homeless Woman – What I Learned From My J.Jill Styling Event
Nut Allergies and Natural Hair Products – What To Do If You’re Allergic to Shea »