2014 proved to be a banner year for concerts for me. Within the past few years, I’ve seen SO much good music. For 2015, I honestly don’t have a long list of many artists that I’m still dying to see for the first time ever. In fact, the artist at the very top of my list – possibly the ONLY artist on my list that I’m like, “I NEED TO SEE HIM IN CONCERT ASAP, I can’t believe I’ve never seen him live before,” is D’Angelo. And in case you missed it, he came to SHUT IT DOWN on Saturday Night Live this week. 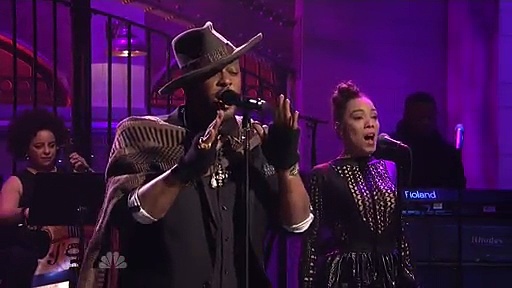 If you’re obsessed with D’Angelo’s latest album, Black Messiah, then you already know these songs are MADE for a live performance. With such a tight backing band and such densely layered vocals, the tracks are just begging to be performed before an audience. D’Angelo came to show and prove in his SNL performance, and he KILLED it. Behold. The first track he did was Really Love, one of my very favorites from the album.

First of all, let’s talk about his backup singer who begins that song in Spanish. Her name is Kendra Foster and she has a fascinating backstory of her own, click here to read via the New Yorker. Twitter was cutting up about D’Angelo’s cape-over-suit-plus-hat combo (very evocative of Clint Eastwood in his heyday, apparently). I thought he looked great – stylish and distinctive and comfortable in his own skin. It’s such a sensual beauty of a song.

I loved the performance of Really Love, but for me the true highlight, the statement, the declaration of intent all came with the performance of The Charade. It felt like history in the making. The performance led one of my favorite writers, Denene Millner of MyBrownBaby, to poetry: “The magic of his performance lies in his falsetto, in the beauty of the guitarist’s delicious acoustic melody, in the artistry of The Vanguard, in the starkness of the chalk outline on the stage’s floor—a tribute to the Black bodies lost in this godawful war against our babies.”

D’Angelo’s backing band, The Vanguard, re-emerged in black tees emblazoned with I Can’t Breathe and Black Lives Matter, and delivered a powerful, undeniable visual and aural message to the audience. The message was underscored by those heavy lyrics — “All we wanted was a chance to talk, ‘stead we’ve only got outlined in chalk. Feet have bled a million miles we’ve walked, revealing at the end of the day, The Charade.” Black power fist. Fin. Wow. 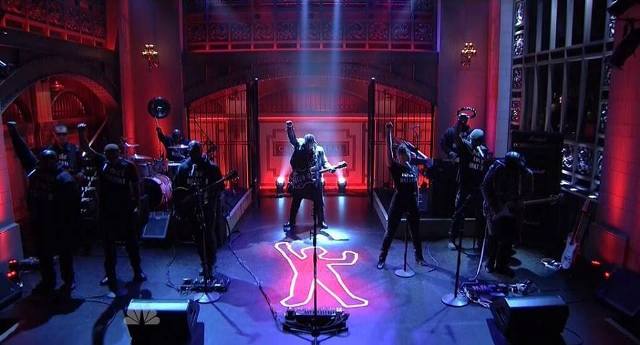 NYC residents, I am JEALOUS of those of you with tickets to his show at the Apollo. Can’t wait for D’Angelo & The Vanguard to take this tour on the road to Chicago.

Did you love D’Angelo on SNL as much as I did? If you don’t already have a copy of Black Messiah, click here to get yours!