Last week was kind of a whirlwind. I was just coming back to Chicago after a funeral. My husband was spending some extra time with his family so I was flying solo. I got back home and didn’t yet have my bearings before I had to head across town to the Ravenswood Event Center for a very special, very unusual event. The Balvenie hosted an exclusive press preview to celebrate the official opening of their 2015 Rare Craft Collection. 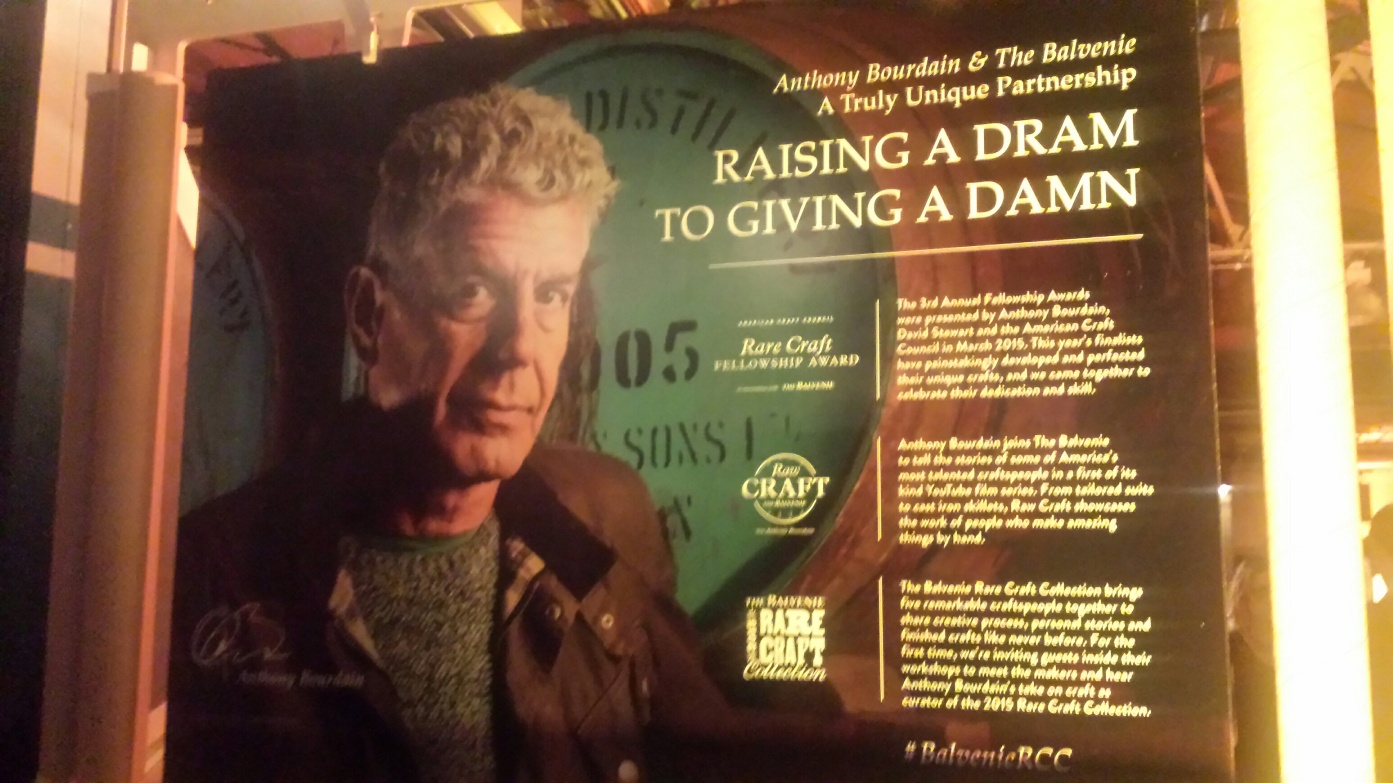 It was a really unique, cool, well coordinated event. Printmaker Megan O’Connell of Salt & Cedar was in one area, demonstrating her craft. Metalsmith Elizabeth Brim was doing her thing. Across from her, watchmaker Ronald Murphy was making watches while sculptor Sebastian Martorana chiseled marble. 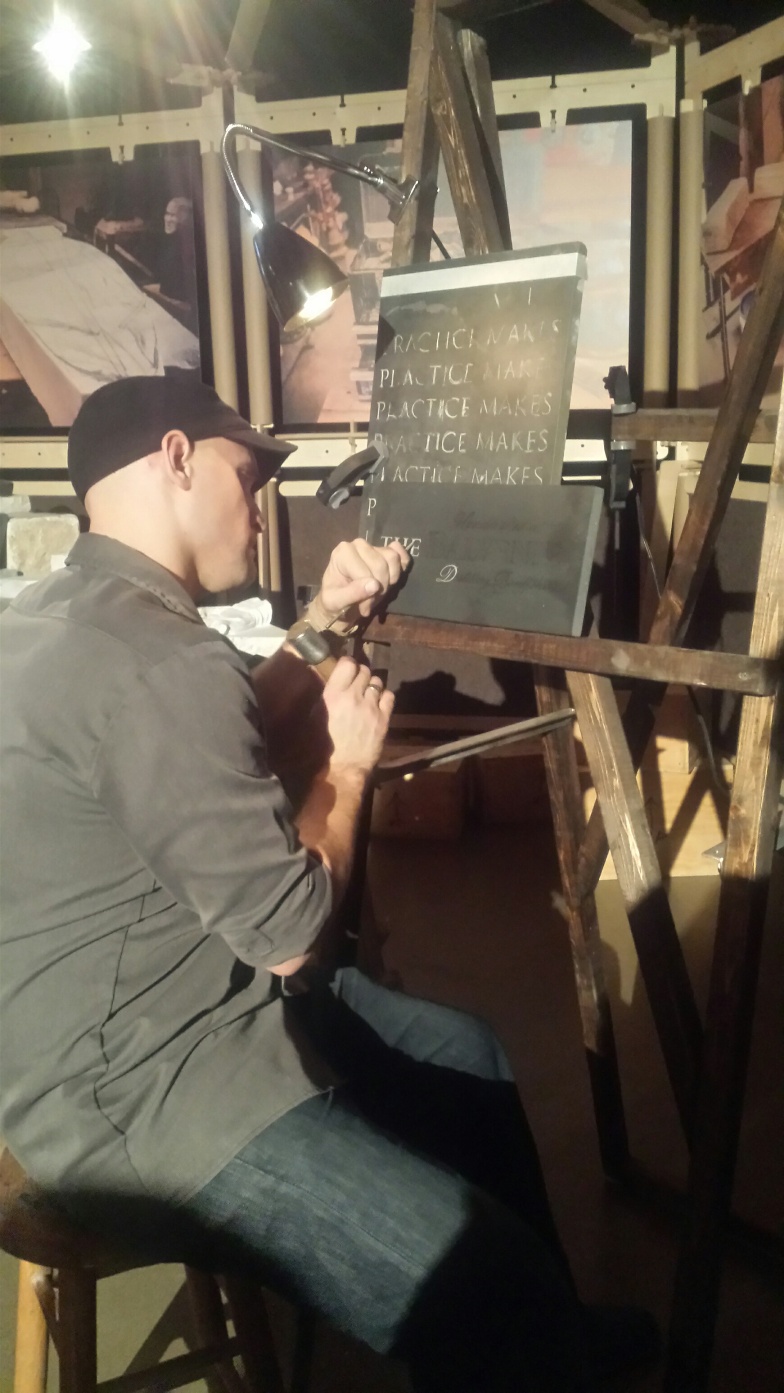 Head cooper Ian McDonald came from Scotland to do an in-person barrel making demonstration. There was all the single malt scotch you could ask for — I tried the Caribbean Cask 14 year (smooth), Port Wood 21 year (smoother) and the house cocktail (at this point I realized I should pace myself). 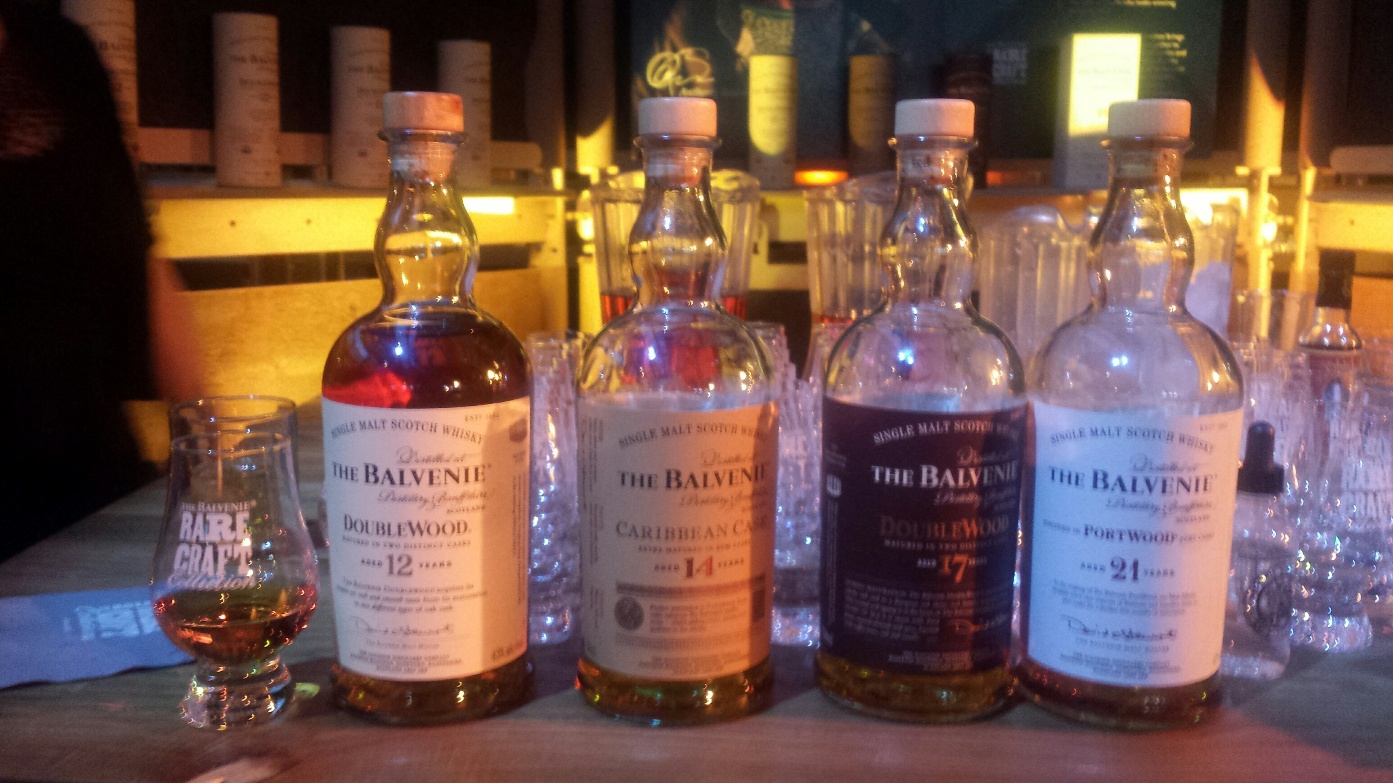 And then there was the man we all came to see, Anthony Bourdain. 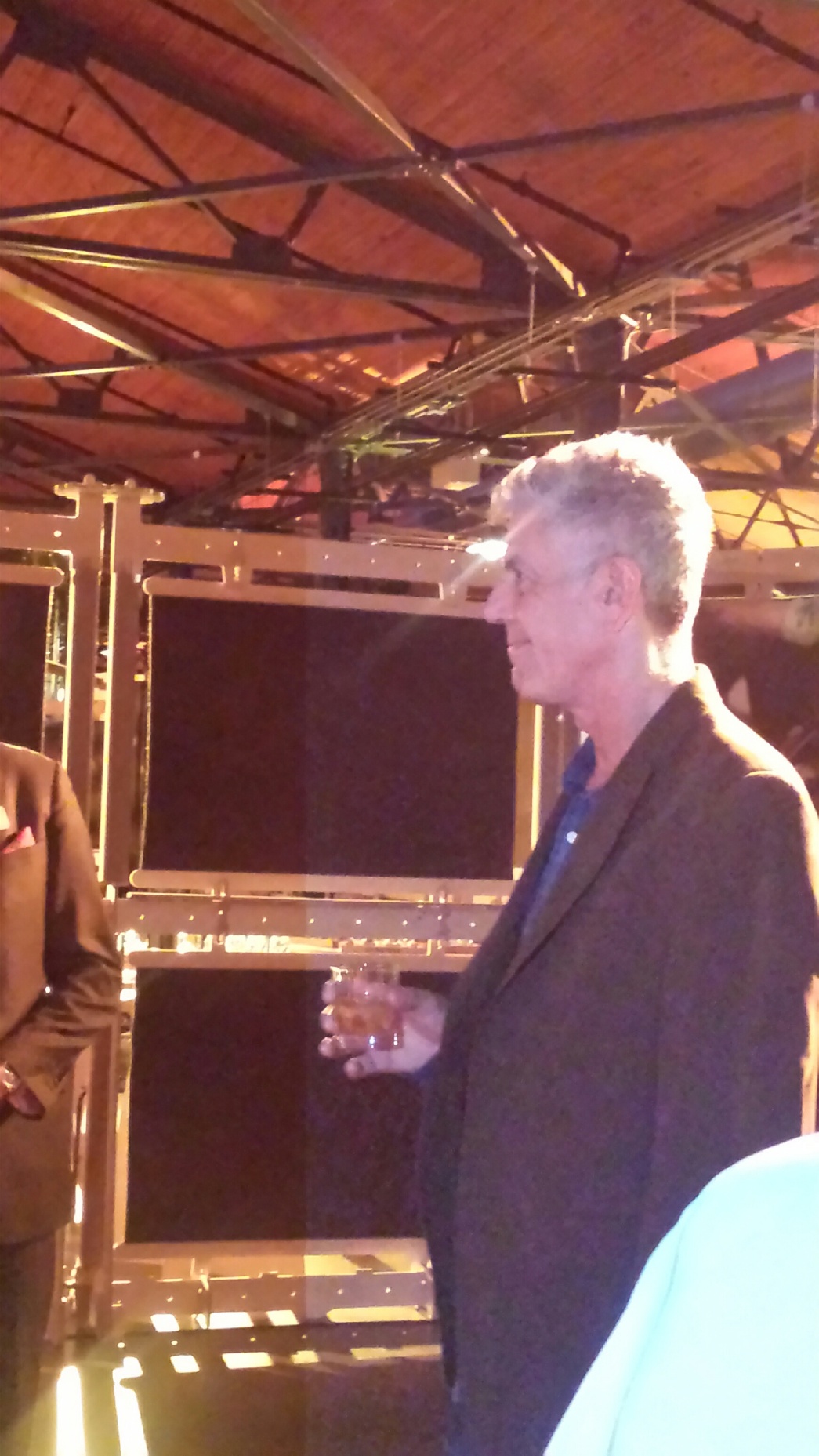 I’ve been a fan of Anthony Bourdain’s for YEARS. Watched his shows on the Travel Channel, love reading his articles and essays, I’ve made some of his recipes from the Les Halles cookbook. I adore his CNN show, Parts Unknown. I knew he was my crush-in-the-head. I didn’t quite realize how popular he was with ALL of my friends (male and female) until I posted our photo on my Facebook page. Men want to be him or be his friend. Ladies LOVE him. Believe me, I get it. I changed my flight from Vegas just so I could make it to this event!

Here’s what attracts me to the guy — he remains curious. He’s always seeking to learn, explore, try new things. It’s inspiring. When I watch his shows, I am struck with hungry wanderlust and I always learn something new. He seems genuine and interesting and gritty. Not a polished-for-TV character. He makes you want to see the world through his eyes. There’s a reason he’s so incredibly popular. 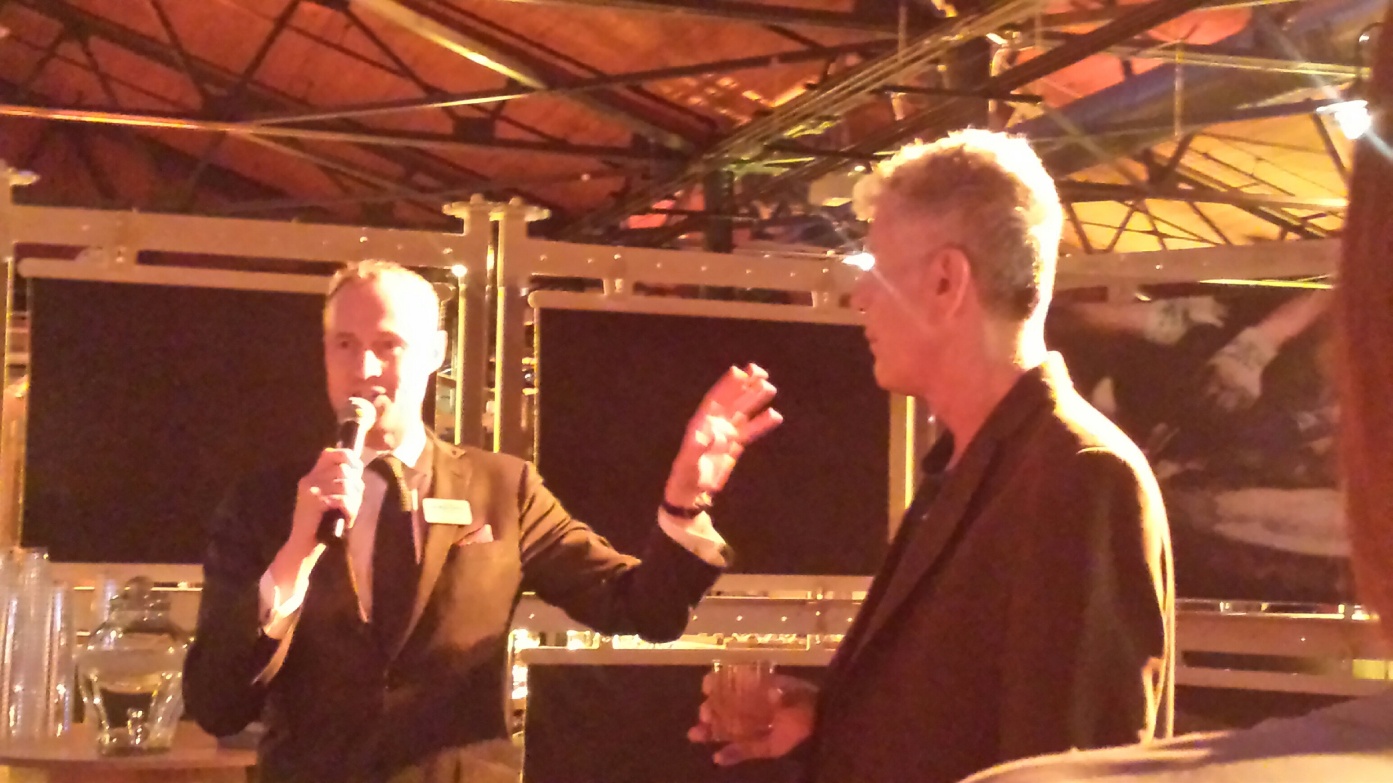 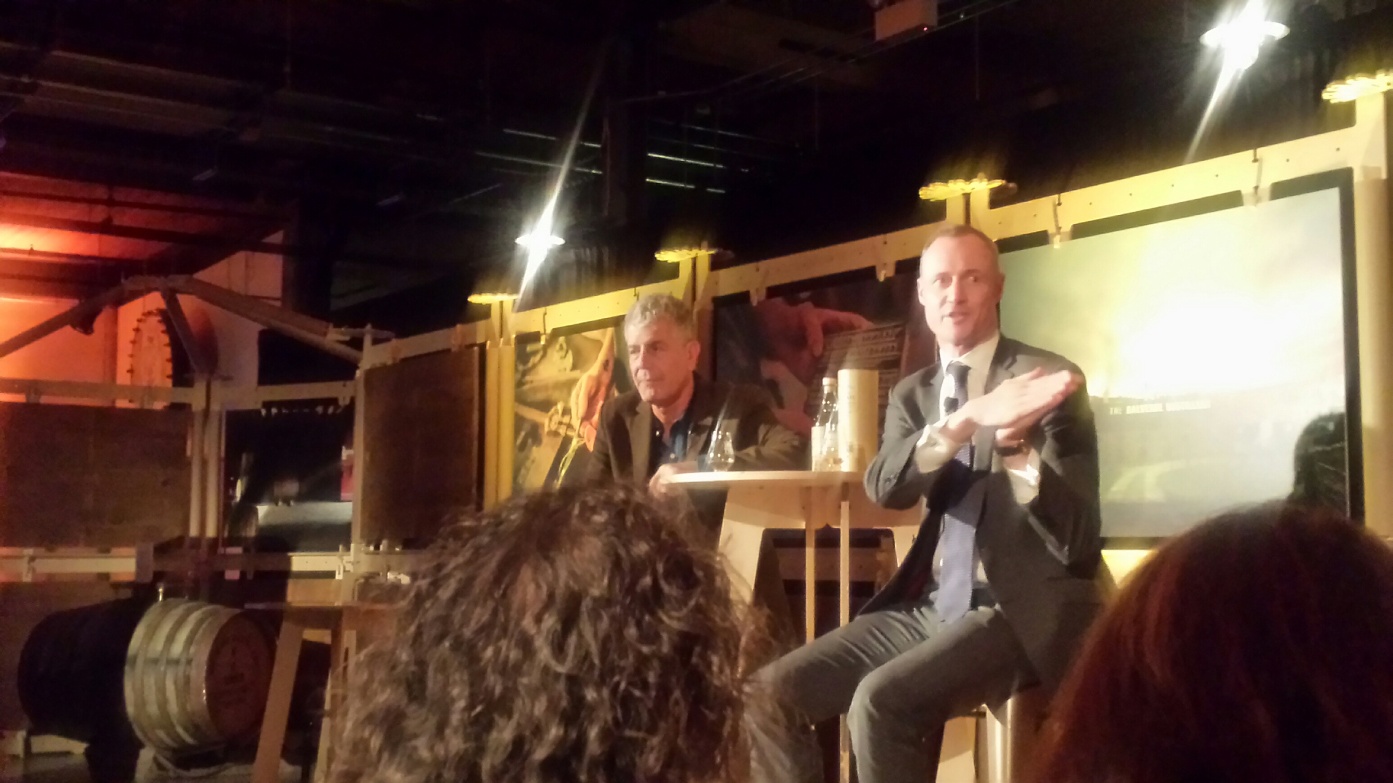 A gentleman from The Balvenie interviewed him on stage for a bit, and he discussed his love and admiration for true craft; like the folks throughout the event space were doing. He mentioned a man he knew who made one suit a month — a terrible business model, but his business has endured because he’s known as the best. He spoke about wanting to always have the Zen Buddhist outlook of “beginner’s mind,” Shoshin. During a too-brief Q&A he was asked for details about Bourdain Market, his new venue set to open in New York. It’s going to be a really unique food hall, focusing primarily on Asian food . He promises over 100 vendors doing 1 or 2 specialty dishes, very eclectic, individually chosen, and set up in a way that encourages individuality instead of a generic experience. It sounds amazing. And then we lined up for our MOMENT. 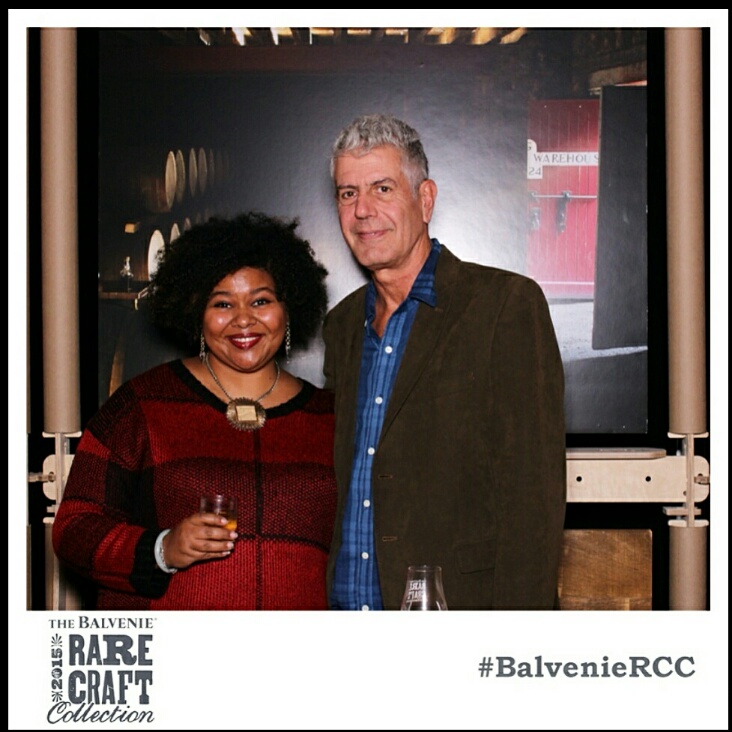 Here I am, meeting Anthony Bourdain. BTW I’m wearing my new favorite sweater, the Camron Plaid Crop sweater from Fashion To Figure (don’t sleep on them, they have super cute tops right now)!

Here’s a quick and dirty OMG-you-met-Anthony-Bourdain FAQ, based on what everyone has asked me since this happened.

A – He seemed awkward in an endearing way. He doesn’t seem like a guy who seeks out or even particularly enjoys the spotlight, but when he’s in it he knows how to command attention. One on one he was perfectly approachable and friendly.

A – Yes. Clean, manly and vaguely of single malt goodness.

Q – Did you get his autograph?

A – YO. I didn’t even know that would be an option or consider that possibility until a girl 2 people before me in line pulled out an old magazine for him to sign. Then I spent the rest of my evening kicking myself for not bringing my copy of his cookbook.

Q – What did you guys talk about?

A – OK so I had an agenda. My agenda is to get Anthony Bourdain to Trinidad. So that was pretty much all I talked to him about. I said “I want you to visit my country,” he asked where I was from, I said Trinidad and he said “oh, you guys have the best food! I know because of Brooklyn.” I told him he should totally go and I have recommendations on craftspeople and chefs and restaurants…and then it was the next person’s turn to take a photo. He says he plans to visit.

I WANTED to tell him about the House of Angostura tour and the cocoa estate where Valrhona chocolate is from, and Trinidad’s up and coming culinary scene and where to get roti and doubles and aloo pies and bake and shark and that I’d be the perfect tour guide for at least part of his episode…but there was no time. So I’m putting this out to the universe. Tony, you would love Trinidad. And Tobago. I hope you go and give us the showcase we deserve.

Thanks to The Balvenie for a truly unique evening and a memorable encounter! Click here to learn more about their single malt blends, and check them out on Twitter @BalvenieUK.

« Star Light, Star Bright — Check Out My PANDORA Jewelry Holiday Looks!
Let Me Tell You Why The Ava DuVernay Barbie Means Everything »