I’m pretty much at the point where I buy stamps once a year — and that’s in February, just in time for the Black Heritage stamps. I buy a whole sheet and I let go of them slowly. I’ve had (and maybe still have a couple) Maya Angelou, Ray Charles, Jimi Hendrix, Sarah Vaughn… the Sarah Vaughn forever stamp is still available on USPS.com, BTW. 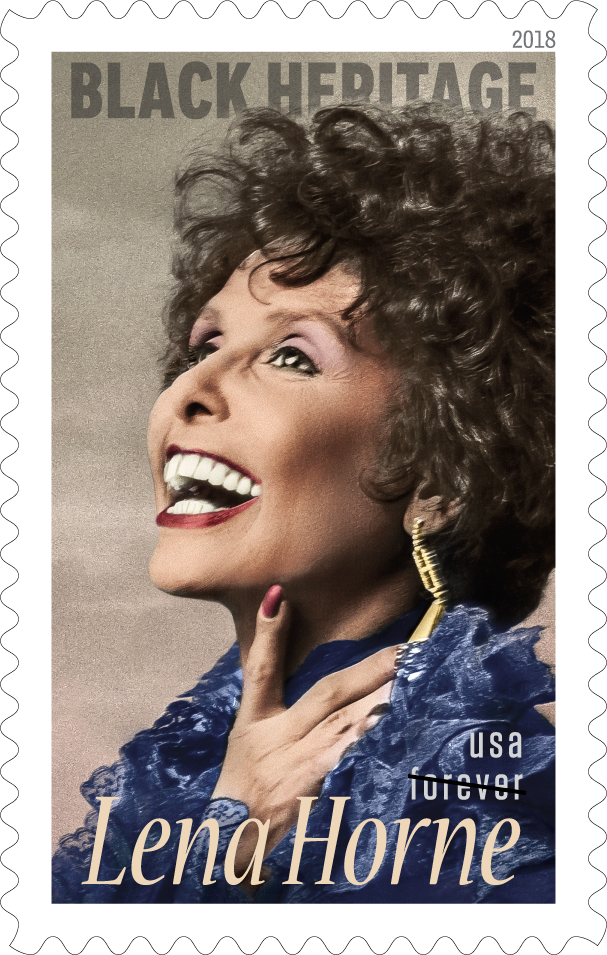 Via USPS: “The stamp art features a photograph of Lena Horne taken by Christian Steiner in the 1980s. Kristen Monthei colorized the original black-and-white photo using a royal blue for the dress, a color Horne frequently wore. Monthei also added a background reminiscent of Horne’s Stormy Weather album, with a few clouds to add texture and to subtly evoke the album title. Art director Ethel Kessler designed the stamp.”

Lena Horne was an icon, a multitalented dancer, vocalist and actress who brought elegance and grace to every performance. If you’re around my age, maybe you first loved her in The Wiz. Maybe it was on Sesame Street or The Muppet Show. Wherever it was that you first laid eyes on Lena Horne, I’m willing to bet she made an indelible impression. She sure did for me.

In case you don’t know as much as you’d like to about Lena Horne, here’s a brief, essential bio courtesy of the USPS:
“Born in Brooklyn, NY, on June 30, 1917, Horne was a trailblazer in Hollywood for women of color and used her fame to inspire Americans as a dedicated activist for civil rights. Horne began her career as a dancer at Harlem’s Cotton Club and later became a featured vocalist with touring orchestras. The rampant racial discrimination she encountered from audiences, hotel and venue managers and others was so disconcerting that she stopped touring, and in 1941, she made her move to Hollywood. A year later, she signed a contract with MGM — one of the first long-term contracts with a major Hollywood studio — with the stipulation that she would never be asked to take stereotypical roles then available to black actors. Her most famous movie roles were in Cabin in the Sky and Stormy Weather, both released in 1943.
During World War II, Horne entertained at camps for black servicemen, and after the war worked on behalf of Japanese Americans who were facing discriminatory housing policies. She worked with Eleanor Roosevelt in pressing for anti-lynching legislation. In the 1960s, Horne continued her high-profile work for civil rights, performing at rallies in the South, supporting the work of the National Council for Negro Women, and participating in the 1963 March on Washington.
Horne’s awards and honors include a special Tony Award for her one-woman Broadway show, Lena Horne: The Lady and Her Music; three Grammy Awards; the NAACP Spingarn Medal; and the Actors Equity Paul Robeson Award. She was a Kennedy Center Honors recipient in 1984, and her name is among those on the International Civil Rights Walk of Fame at the Martin Luther King Jr. National Historic Site.”

Click here to get your Lena Horne forever stamps!