Children’s books are such a fascinating area of Black literature right now. So many new books, new authors, new opportunities – it’s beautiful to behold and so inspiring! After years where there was a dearth of reading material intentionally by and for black boys and girls, we’ve come into a beautiful time of inclusivity, diversity and creative energy. More and more I’m seeing authors step into their purpose and write the books they wish they had as children, layered with whimsy and passion and beauty.

One major impetus for the wave of more inclusive children’s literature is Denene Millner. Denene was already an award winning author in her own right, with multiple New York Times bestsellers under her belt. Then she undertook the creation of Denene Millner Books, her imprint which focuses exclusively on books for Black children. She describes her imprint as “ a love letter to children of color who deserve to see their beauty and humanity in the most remarkable form of entertainment on the planet: books.” Beautiful, eloquent, powerful and intentional. So far, Denene Millner Books has released some award-winning classics. One of her top 2017 releases — Derrick Barnes’ Crown Ode to the Fresh Cut — earned Newbery, Caldecott, and Coretta Scott King honors from the American Library Association and just won a Kirkus Award. IMO, another of her most recent releases — What is Light? by Markette Shepperd— seems poised to follow in similar footsteps. 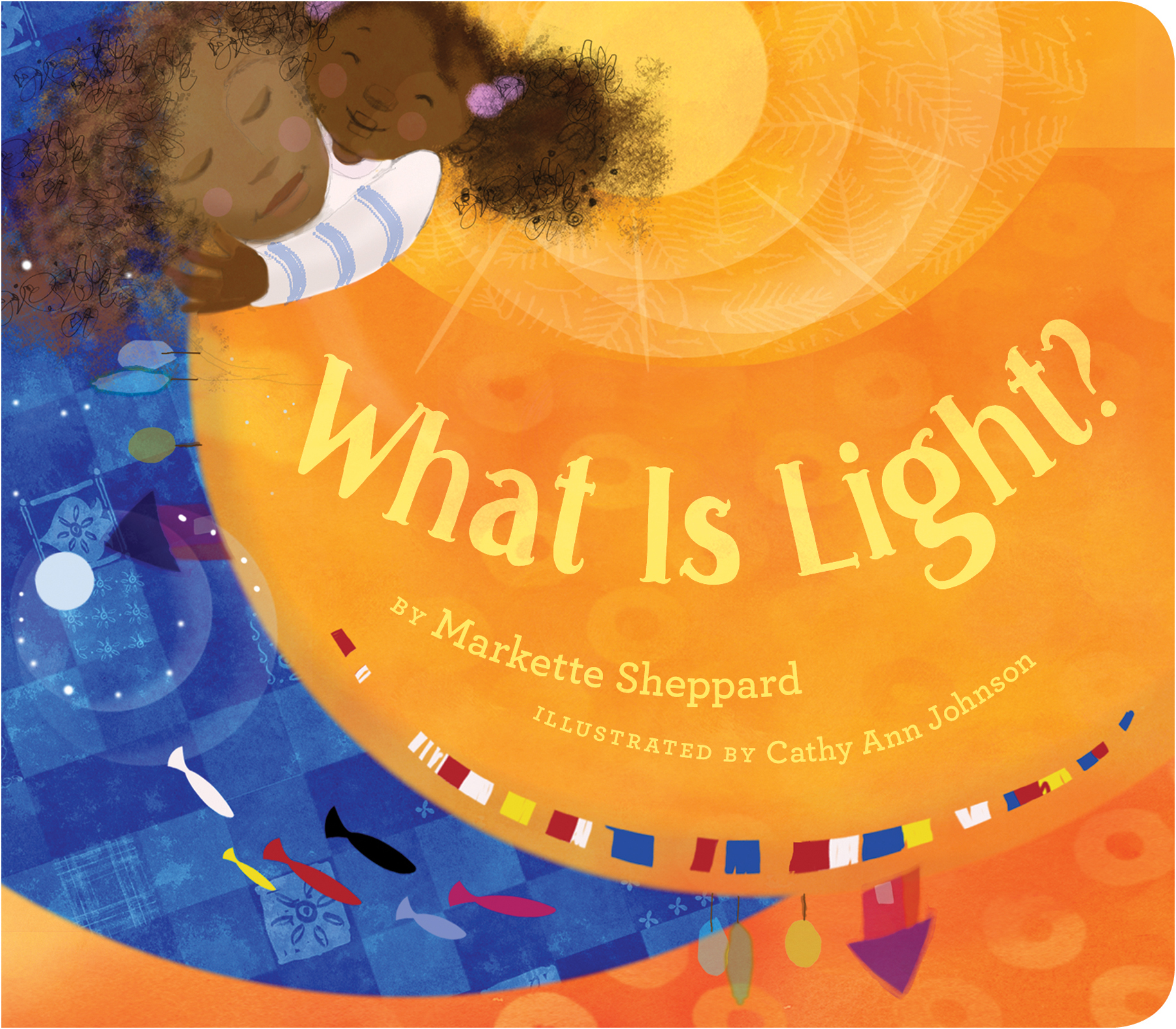 Markette Shepperd is a broadcast journalist and talk show host, and What Is Light? is the first board book offering from Denene Millner Books. It’s described as “…a bright exploration of the sparkle found in children’s every day world—a glow that helps them discover not only the beauty and good in nature and loved ones, but also themselves.” It’s simply beautiful. I had to ask Markette Shepperd about the intention and inspiration behind her first children’s book, and what parents can expect from the second.  The responses she sent went much deeper than you might expect – there are lessons here for adults, too! Read on for Markette’s wisdom, bellas!

Afrobella — What is Light? is so beautiful and gently inspiring. What was the inspiration?

Markette — First, thank you for that warm reception! I hear many similar things from a lot of parents and it’s been such an amazing and humbling experience to share my light, literally, with so many others through this board book.

I was inspired to write “What Is Light?” right after the birth of my first child. I was home with my baby boy for the first year and, as I was learning to be a mom. At the same time, it was like a rebirth for me. I was 33 and not working for the first time in my adult life. I read a lot of self-improvement books that year, I took the time to learn how to make all-natural baby food from scratch and just spent the year reflecting inward, while also indulging in my newborn’s sweet innocence.

A few years prior I was going through a stressful time working as a reporter and a colleague, who was a veteran in the business, sat down with me and told me, “You’ll be fine.” She added, “You have an enormous amount of light shining down on you.” I just didn’t quite know how to take that and what to do with that information. I said to myself “OK,” and kept it moving. It wasn’t until I had my son that I began to understand what she meant.

Babies are born with innate light inside of them that is just as natural as breathing. Their pure existence changes the energy of a room, in that people get excited when they see babies, they want to hold them, take in their little soft breaths and wiggle their little toes. They make people happy and they don’t even have to do anything to elicit that kind of joy, but exist.

I began to think that there had to be a way to share with children, from a very young age, that they have this light inside of them and they can use that light in their everyday lives to continue to create joy, for themselves and for others. More importantly, they can use that light to remind themselves that they are important, and they have a God-given value that cannot be taken away from. This is particularly important for children of color, our black and brown babies to know.

I feel like I was 33 when I got it, but who knows where I’d be and what I’d be if I had held that sentiment earlier in life. Too many times we let people, society, naysayers, and haters devalue us, but they are so wrong. We need to know about our light, and use it as a guiding light to keep ourselves feeling whole.

As a journalist, I wanted to capture that sentiment in writing some way, but for a child to understand. So, I started writing down poems here and there in a notebook that I told myself I would save them for my son for when he grew up. It was like a little book of wisdom of everything I wanted him to know about life that they don’t teach you in school. One of the poems in that notebook was, “What Is Light?” I kept it in my notebook for about a year and then I began feeling the urge to share it with him sooner. I began reading it to him at night as a bedtime story. Eventually I would send it to publishers in the middle of the night when I had some alone time.

I believe it was around Christmastime when I sent the manuscript for “What Is Light?” to Denene Millner and her new book imprint and that’s when the things started to move quickly. She told me she got chills when she read it and I felt like we had formed the perfect partnership for spreading this message of light to children everywhere.

Afrobella — Please tell me about your writing process. Did you partner up with an illustrator first, or did the words come first?

Markette — My writing process starts the old-fashioned way, with a pen and paper. I feel something when I write in a notebook that I don’t feel when I type. I feel a little freer when I write like this– I mix handwriting with printed letters. I scratch things out and write between the lines. I have fun with it.

When I get to a place where I feel like my story is ready to be shared, then I type it up. I change it a bit, but essentially it stays pretty close to the handwritten version.

I am purely a writer, so I have no illustrating abilities. Denene gave my words to artist Cathy Ann Johnson to interpret and thus, you have the beautiful images that illustrate “What Is Light?” — and might I add it’s a book put together by three Black women, me, the publisher and the illustrator.

Afrobella — What do you hope your readers and parents get from What Is Light?

Markette — I want readers young and young at heart to understand that they have a light inside of them and they should let it shine.

This is a book that mothers can get something from, too. If you’re reading it, then you’ve probably just gone through the life changing experience of having a baby in the last few years. You’re giving a lot of you, you’re working hard to keep your kids and the household together and you’re tired, and just like the message is a gentle reminder for children, it also serves the mama, too.

Afrobella — What are you working on next?

Markette — Oooh, I am so excited about my next book, “My Rainy Day Rocket Ship.” It’s one that I literally woke up in the middle of the night and started writing after a spark of inspiration. If “What Is Light?” is the message, then “My Rainy Day Rocket Ship” is the adventure! It’s about a little boy who’s stuck inside the house of a stormy day and dreams of going to outer space. He does something about that dream and that’s when the adventure begins!

Thanks to Markette for the wise words and inspiration! And thank you Denene for creating such a wonderful imprint! Click here to check out all of Denene Millner’s books on Amazon.

pets says:
Love this! Children's literature - Check. Written by a Woman - Check. Black - Check. But the story and illustrations are universal and basically colour blind - Check.