The Wise Words of Vidal Sassoon

When I announced to my friends that I was on the line with legendary hairdressing icon Vidal Sassoon, the reaction was hilarious. 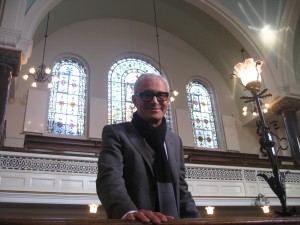 On both Twitter and Facebook, friends were telling me they didn’t realize Vidal Sassoon was a real person. When I told my husband he quipped, “that’s like you telling me you interviewed Neutrogena today.”

Most definitely the name Vidal Sassoon became synonymous with a brand. I grew up with that familiar dark brown bottle in my life, as a fixture at hair salons and in my mother’s shower stall. I am just old enough to remember the ubiquitous commercials, the distinctive haircuts, and the catchphrase, “If you don’t look good, we don’t look good.” But as Mr. Sassoon — excuse me, Vidal! He insisted! — has grown older, his personal image took a backseat to the iconic brand he created. Until now.

Vidal Sassoon himself is stepping back into the limelight with a new documentary about his life, appropriately titled Vidal Sassoon: The Movie.

Vidal Sassoon is now a self-described octogeneranian, and the world of hair has changed tremendously. Mr. Sassoon might no longer be the scissors-wielding wizard who took the hairdressing world by storm, but he’s got so many stories to share, so much wisdom to impart. During the interview – which took place on the phone with a select list of beauty bloggers and writers — it was fascinating to hear the range of questions Vidal was asked. His grace, professionalism and sensitivity in answering our questions was truly remarkable.

I was lucky enough to have the first question. I asked about his views on the natural hair movement, in regards to having watched the growth and evolution of it in the original heyday.

“We were so involved! We opened in New York City in 1965, a time of great racial difference. My black friends would take me down to Harlem and I was amazed by the beautiful shape (of the hair), the curly look. My mission was to give the shape of these heads, and this sort of hair texture to everyone – whites and Asians, etcetera. We solved the problem of how people with straight hair could get those beautiful curls, but we never figured out how to give black straightened hair that marvelous shine. That’s been the advance of science.”

Vidal gave very detailed and deliberate answers, but after my question he seemed concerned that he hadn’t quite answered to the best of his ability. Had this been an in person interview, or a one on one phone interview I might have pressed the question and asked him more of his views and experiences with natural, black hair, why our hair isn’t taught in hairdressing school beyond straightening techniques…but it was not the occasion for that. No sooner had Vidal asked “have I answered your question, darling?” then it was on to the next writer with her carefully phrased question.

Over the course of the interview, Vidal took us down Memory Lane to 1954, when he opened his first salon with just four staff members. He shared the memories of difficult clients who insisted on hideous haircuts, threatening him that he’d “be broke in months.” Instead, he went on to redefine the role. Vidal Sassoon launched the dreams of hairstylists around the world and began the rise of the celebrity hairstylist.

“I’ve been in the craft for 65 years. I started at 14, and on my next birthday I’ll be 84. I’ve seen so many changes.” From setting Bond Street ablaze with trendsetting equals like Mary Quant, to creating the iconic and architecturally influenced 5 point haircut, to blazing trails in the United States in the 70’s and 80’s, he shared his wisdom and experience with candor and tremendous consideration.

Despite all of the changes he’s seen in hair styling, he still believes that craftsmanship and cut are essential. He’s concerned about the lack of skill he has observed of late. “I hate these curtains that hang on the side that are uncut. There’s too much of that going on. I’d love them to get back to the cutting.” One thing I greatly admired was Vidal’s insistence on taking the high road. He was unwilling to disparage any celebrity’s hair, even when pressed. “We always made a pact that we’d never knock somebody off his work, we’d just do our own work.”

Vidal Sassoon: The Movie began as a gift. Producer Michael Gordon is a hairdressing icon in his own right, as the founder of the Bumble and Bumble salon, product brand, and hairdressing salon. He made this film for, and with the cooperation of, his friend Vidal. “Four years ago when I was 79, Michael said he wanted to give me a present for my 80th birthday. It was this film, about my life.” He expressed no concern about his movie, only delight and excitement. “I knew because of the quality of Michael, it was going to be good. The funny thing is, the older you get, the more fun you have. I was writing a book and working on the movie, and one helped the other.”

There were so many things I wanted to ask Vidal about — his amazing rise, from once being placed in an orphanage to now being a millionaire and an icon. His streetfighting days as a member of the 43 Group. His tireless work to address and eradicate antisemitism, his memories of the Israeli army. Alas, there was not enough time. So instead I’m going to see Vidal Sassoon The Movie, to educate myself further about this living legend.

Vidal Sassoon has always had a delicious voice, and now his tone has grown grandfatherly. He sounds cultured and warm and just plain interesting, the kind of charming gentleman that you’d love to call friend and have over for afternoon tea. I absolutely loved every moment of the interview. The most resonant words Vidal offered were meant to be offered as advice to anyone who aspires to his levels of greatness: “Fear is the worst enemy. Go for it. If it’s liked, wonderful. If not, you tried. You may not be liked by everyone, but at least you’ll have had a lot of fun…just get on with it. Live a rich and full life.”

For even more on Vidal Sassoon, check out this great interview on NPR.

SanTara says:
Patrice!! I love this!! I have been an admirer of Vidal Sassoon since I picked up my first pair of shears at 10. I worked with another industry great who has cutting education based totally on Vidal Sassoon's technique. I am blessed to have studied this man's craft and better yet impliment it into my career. I don't EVER think I felt so excited reading anyone's interview. The 5 point cutting system is still in hair schools across america, now that is legacy. Ha! I cant wait to see his movie. Thank You again for such a great post. YOU ROCK!! oh, I would LOVE to see/hear your question "why our hair isn’t taught in hairdressing school beyond straightening techniques" put on the table for more dialogue (radio special perhaps?, im in!!) lol

Chaplain Donna says:
This movie was amazing! It inspired me and really infused the energy around me with possibilities. I must have been an amazing moment in your life to interview a man that lives life to the fullest! Congratulations on such a wonderful accomplishment!

Lola Zabeth says:
Great post! Loved hearing his take on Black hair in the 60s. Thanks for sharing.

gs says:
I really would love to know what his thoughts are on black hair, if he even has any. He must, considering how much money we spend. He definitely is the blueprint for all things hair. How cool would it be to have a Vidal Sassoon, stylist, products, icons etc. of natural hair. Hopefully soon...

DNLee says:
Yep, looking forward to it. Thanks, for sharing this story.

Caribbean Girl says:
Amazing opportunity. I heart you. Just to add: I recently had the pleasure of listening to a radio interview with Vidal Sassoon, on BBC World Service - you could try to find that one also and take a listen.

CrystalS says:
My mother has limp fine hair that does nothing. After spending nearly the whole of the fifties fighting her hair and the sixties growing her hippie hair down her back, she walked into a Sassoon shop and was given a sleek bob she could actually wear with the ease of wash and go and the style of a big to do. She has worn slight variations of that bob for over 40 years. And it's always chic. She loves Sassoon and was always a little disapointed that I couldn't wear his cuts. (I'm very curly).

goldenstar says:
I have curly hair and have gone to Vidal Sassoon salon and Academy for the past 5 years because they really understand curly hair and can execute it so beautifully.

pets says:
Aunty Gemma went to his London Salon in the 70s (before '79)and came back with a great haircut next time you're home I will show you her picture.

LBell says:
"On both Twitter and Facebook, friends were telling me they didn’t realize Vidal Sassoon was a real person. When I told my husband he quipped, 'that’s like you telling me you interviewed Neutrogena today.'" Thanks for providing me with my daily dose of You Are Officially Old medicine. ;) On the flip side, watching that trailer: He moves well for someone who's almost 84! Best believe I will be getting back into yoga this year!

PAT ALKER says:
Vidal, Cut my hair in 1964, I SAVED all my wages for 4wks I WAS WORKING as a hairdresserin Portsmouth but no one would attempt the geometric styleb best cut I ever had,JUST WASH it and shake your head and it all just fell into place. Thank-you Vidal you are and always will be THE ULIMATE Hairstylist. And how fab do you look STILL an ICON.

Vivian says:
Fabulous!! You go mama :-) Looking at Vidal on the Martha Stewart show, so I wanted to look him up on the Internet and yours was the first article that came up..

T says:
how crazy is it that Im watching the move RIGHT NOW and looking @ natural hairstyles online, and i run into this!!?? WOW I love the movie! :)

Lauren says:
What an amazing article. You're so fortunate to have met him and spoken to him! I will definitely check out the documentary. :)

Nicole Douglas-Phillips says:
Absolutely love your interview. I found this article while googling a similar question.