I’m not typically a fan of the rom-coms. I’m gonna blame it on my film major background – having studied films and scripts and criticism so closely for my college degree, it’s made me a less than fun person to watch a movie with. I can see the script in my mind, and instead of suspending disbelief, all I can see are plot holes. If I weren’t me, I’d hate watching a movie with me.

Generally speaking, it takes quite a bit for me to LOVE a movie, especially a summer blockbuster or a romantic comedy.

Which is why I found Jumping the Broom to be such a pleasant surprise. 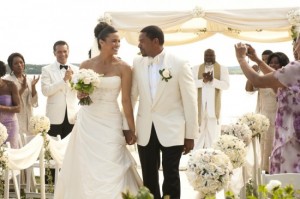 Sure, parts of the film meet those typical romantic comedy expectations. But the location, the cast, and the plot elevated it from the pack. Jumping the Broom is super cute, and full of visual stimulation, fashion inspiration, and vibrant performances by some of your favorite actors and comedians. AND, I’m so delighted to add, a great script cowritten by longtime Afrobella reader Arlene Gibbs, AKA NYC/Caribbean Ragazza to regular Afrobella commenters! I’d say that makes this a movie that totally deserves our support, bellas!

At a recent premiere here in Chicago, I was lucky enough to meet the iconic Angela Bassett (who stars as Mother of the Bride). 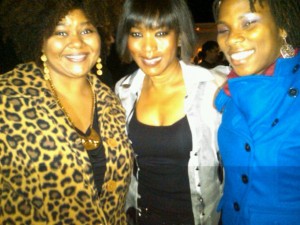 She looks STUNNING in person, and was so gracious in posing with me and Luvvie. Absolutely DYING to know her beauty secrets! And this month’s Ebony Magazine features sumptuous photos of the cast, and juicy interviews to boot.

I recently interviewed Ebony’s fashion director Elaine Welteroth, and she GUSHED over their May Mother’s Day themed issue. Angela Bassett, Loretta Devine, Paula Patton and Laz Alonzo look stunning on the cover. And can I just add on a personal note – it’s been wonderful to see the change in Ebony magazine. There’s clearly a breath of fresh air there, and over the past few months Ebony has managed to become a magazine I love and look forward to reading again. Trust me – as someone who always seems to be on an airplane, I am discriminating when it comes to magazines that get my money.

Ebony’s new fashion section alone reflects so many of the changes made. Vintage fashion inspiration via the ever-stunning Pat Cleveland. A turban tutorial from the divine June Ambrose. FLY photos featuring stylish mothers and daughters, including Kimora Lee Simmons, Nicole Murphy, and Alfre Woodard. And my favorite new feature – Style Spotlight, which features tastemakers you may not know much about. This month’s issue features Wolfgang Puck’s STUNNING wife, Gelila Assefa Puck.

Back to Jumping the Broom – in addition to featuring the cast and supporting the film, there’s a lovely crossover with Fashion Fair Cosmetics, which now has a Jumping the Broom collection of timeless eyeshadow shades and lip colors that are SO perfect for brides. Shade names include Chocolate Cake, Seashell, I Do, and Dreamy. Tres apropos.

I hope Jumping the Broom is hugely successful at the box office, and I love this multiplatform crossover. It’s rare that a movie made for us, by us, gets this kind of multimedia push and ALSO manages to be worth it. It opens nationwide on May 6, and would make for a super cute girls’ afternoon out followed by dinner afterwards, with your amigas or your mom!

Will you see Jumping the Broom? What do you think, bellas?