Bellas, Afrobella Makeup Expert Meagan Shea isn’t just a bubbly personality and an awesome haircut. Far from it. She’s a makeup artist who knows her stuff, and is building an impressive roster of clients… some of whom are famous and awesome in their own right. Take for example, singer-songwriter Res.

I’ve never met Res but I feel a six-degree of seperation sisterhood with her. I’ve always loved her music (Golden Boys still stays on rotation with me), and for years she’s gotten her hair done by stylist and friend Felicia Leatherwood. Felicia really is like my sister from another mister, y’all. And Meagan Shea who I also love, just did her makeup for her latest video shoot. And she’s here with an exclusive behind the scenes look!

Take it away, Meagan!

Rockin’ with Res: That’s Just “How I Do”

As a makeup artist I’ve always had a list of artists whose beautiful faces I’d love to touch. Not in a creepy stalker way, but in a I’d love to do their makeup kind of way. It’s always a dream to work with artists that make the music you respect and love – well I recently had the opportunity to do just that! I got to work with Res!!! I’ve been a fan for a decade and when I found out I’d finally be working with her, I was elated!

Some of you may be thinking, “I’ve never heard of Res” – well there’s no time like the present! Res’ debut album, “How I Do” was released in 2001 & while the neo-soul scene was booming she managed to set herself apart from the rest. I remember trying to find a genre to place her music in and just couldn’t seem to find one – THAT’S THE SIGN OF A GOOD ARTIST! Stop for a second & take a look at the video for her song, “They Say Vision” from her debut album. I’m sure you’ll see why I’ve always wanted to do her makeup. That face, that bone structure – WINNING!

I had the pleasure of working with Res last week, doing makeup for her music video for a song entitled, “Dreams”. This will be the first single from her upcoming EP entitled, “Refried Mac”. I’ll get back to that…

We filmed the video on location in Philly, Res’ hometown and in West Chester at ‘The Note’ during a live Talib Kweli show for his “Gutter Rainbows” tour. 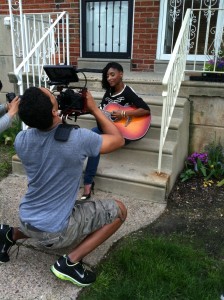 Res with her guitar on location in Philly

I did two different looks for the video; a natural look and then a much more dramatic look for the live performance. My decision on the first look was easy, I asked what she wanted & it was pretty clear. When figuring out what products to use I had to take into consideration where we’d be filming, the type of light we’d be using and of course what she’d be wearing. I was lucky that she was wearing neutral colors for the entire video.

For the first look I went for a simple, natural palette with a lip color that had a little more pop. This look was really inspired by Sonia Rykiel’s runway look for S/S 2011 (remember it was my favorite from my last post). I used a shimmery beige shadow on Res’ lid and a darker semi-matte brown above her crease to blend into her complexion. For her lips I used a berry colored lipstick mixed with a fuchsia lipgloss.

Res on location in Philly (I LOVE THAT BETSEY JOHNSON SWEATER!)

The evening look was a little different, because of the lighting used in the venue. I had to talk to guys doing lighting and asked them to show me what Res’ lighting would be during her performance. When I realized the lighting would be really sultry & dark I knew whatever I did had to be able to stand out in that lighting. Res and I decided to go with a really dark grape colored smokey eye, serious highlighting and a shimmery grape gloss. The colors needed to be exaggerated for the camera to pick up the colors and tones. 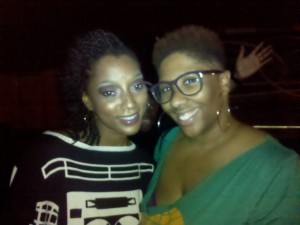 Res has quite a few projects in the works. She and rapper (and longtime friend) Talib Kweli formed a group, Idle Warship in 2008. They released a mixtape, “Party Robot” in 2009 and are currently working on releasing their second project together (the album is completed & I’ll keep you guys posted about when it’s released). Res has been touring w/Talib on his “Gutter Rainbows” tour, performing songs from her upcoming EP, “Refried Mac”. Refried Mac is an EP consisting of five songs – ALL Fleetwood Mac covers. Res shared with me that Stevie Nicks is one of her favorite vocalists, so it’s an honor for her to do this EP. Don’t expect the songs to be your typical covers, Res has taken these classic rock songs and given them some soul. She will be exposing her audience to a genre of music they may not be used to grooving to.

If you aren’t already a Res fan, I suggest you tiptoe over to her website & take a listen to her recent EP, “Black Girls Rock” (THE TITLE ALONE SHOULD MAKE YOU A FAN), which is SOLD OUT. Don’t worry, you can listen to it for FREE (check out the first song, “For Who You Are” – it’s my FAVORITE).

You can also purchase her debut album, “How I Do” on iTunes and on her website under the “merchandise” tab. There you can not only purchase “How I Do”, but you can download the first Idle Warship mixtape, “Party Robot” FOR FREE!!! Also, subscribe to Res’ YouTube channel, it’s a great way to stay updated on what she has going on, when she’ll release new music and where she’ll be performing… NOT TO MENTION WHEN THE MUSIC VIDEO WILL BE RELEASED THAT WE WORKED ON!!! I can’t wait to see it!!! Until the next time, lovelies! Stay beautiful and smile as often as you remember to! 🙂

“>Meagan Sheá is a makeup artist for hire in the MD/DC/Philadelphia/NYC area.

I love Meagan’s attitude to life, she’s so bubbly and full of win. Click here to follow her on Twitter, and click here to join her FB makeup page. And if you live in Maryland, Washington DC, Phlly or NYC and want your face beat to the gods, click here to contact her!