Back in 2010, a little curly ‘froed Muppet on Sesame Street stole my heart and made the rounds of every hair blog on the internet. Who can forget that adorable natural haired Muppet who sang I Love My Hair?

Back in 2010, many of us publicly expressed concern that our little Muppet sistren would be relegated to background appearances, or even worse, wouldn’t appear any more at all. I’m so happy to report that isn’t the case. 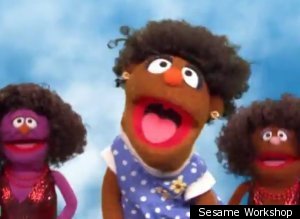 It took a year, but YAY! The natural haired Muppet is BACK with a brand new song! Via Huffington Post:

The song is written by Joey Mazzarino, the show’s head writer. He penned last year’s “Hair” song for his then-five year old daughter Segi, whom he and his wife adopted from Ethiopia when she was one. The character is clearly inspired by the little girl, and it’s touching to see a father give his daughter such a great pep talk in such a creative and public way.

“Sesame Street” just started an anti-bullying campaign, too, working to encourage kids from a young age to be accepting of everyone.

The new song is catchier IMO, and just as cute and inspiring!

I found it interesting that this video is getting negative comments on YouTube, when the concept of the song reminds me SO much of a classic Sesame Street song I have long loved, which dates back to the golden era of Children’s Television Workshop.

We Love Fine still has super cute I Love My Hair tees for sale, and now Sesame Street came up with a super cool new feature — Kinect Sesame Street allows kids to actually be inside and move around in the world that Grover, Elmo, and Big Bird inhabit. How awesome is THAT?

What do you think of the new natural hair Muppet song, bellas? Here’s hoping for more songs (and not a whole year till the next one)!