I’ve been a major fan of Jim Henson and the Muppets my whole life. Before I even could speak words. I was raised on a steady diet of Sesame Street, Fraggle Rock, The Electric Company, 321 Contact and the original vintage episodes of The Muppet Show — gloriously broadcasted on TTT every afternoon around 4, as perpetual reruns that were burned into my brain. I’ve seen every movie, and I have special love for the original Muppet Movie and Labyrinth, which I’ve seen more times than I can count. If you have a Trinidadian friend in their 30’s, ask them. They probably watched WAY more Sesame Street and The Muppet Show than your average American everyman. I watched reruns of Sesame Street and The Muppet Show so much that at one point, I could sing entire songs and recount entire skits verbatim.

So you’d imagine that I would be super excited for the revival of The Muppets via the new movie, directed by Jason Segal. Instead, I feel unsure. I’m inclined to side with Muppets legend Frank Oz in my skepticism. While I’m very happy to see The Muppets return to play the music and light the lights, part of me wants to clutch my stuffed Super Grover tight and just watch the original Muppet Movie again.

Having said that, I will probably be seeing the new Jason Segal themed Muppet movie when it’s released. And I’m definitely digging some of the incredible merchandise being released in time for the film. Let me share the hottest items I’ve seen so far. Muppet Makeup? Who would have thought?

When I was little I never cared much Miss Piggy and her hi-ya hijinks, but there’s no denying her glamorous persona. Miss Piggy has always been one to remain draped in fur and diamonds, and she always has had a signature makeup look (all about the eyes, natch). MAC’s Miss Piggy collection will be online-only and it will launch November 14th in North America as well as select international locations at maccosmetics.com. Word on the street — via two of my fave makeup blogs Temptalia and Makeup and Beauty Blog — is that the Miss Piggy Pink eyeshadow is super sheer and takes a LOT of packing on to reveal color impact, but the lashes are tres chic.

The most sensational inspirational celebrational Muppetational makeup collection out is gloriously packaged, SUPER limited edition — only 1000 were made and they’re all numbered! And pretty much all gone. Which is a bummer if you’re really obsessed with all things Muppet and need this for your collection. If you’re into it for the actual makeup colors, fret not! According to Temptalia and Musings of a Muse, all of these same colors are re-named and featured in The Balm’s soon-to-be-released holiday palette, TheBalm and the Beautiful! So hang tight — and in the meantime, like theBalm on Facebook and follow them on Twitter for upcoming deetz! 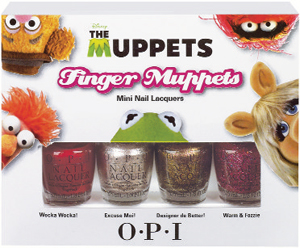 The folks at the Muppet Wiki feature all of the colors, and Bellasugar breaks it down for us — the OPI Muppets collection will launch in November and includes 12 limited edition nailpolishes — six of which are out of this WORLD glitters! I think I need Rainbow Connection in my life. Stat.

The new Muppet Movie opens in theaters for Thanksgiving.

Were any of you Muppet fans? Are you? Will you be seeing the new movie, and what do you think of the makeup? Tell a bella!

Shannon says:
Yup. Watched it faitfully. I loved Miss Piggy . . . after all, you gotta love a chick that is always making fun of the mainstream standard of beauty. But, I really loved ANIMAL. I still do.

Reecie says:
I watched Muppet Babies cartoon moreso than the original Muppets, so I don't have a strong desire to see the movie. Miss Piggy and Kermit were my favorites. I was super hyped about the nail polishes especially, and am currently wearing OPI Warm & Fozzie. I LOVE it!

pets says:
I watched enough Sesame Street,and Muppet shows when I was younger and love Kermit, Fozzy Bear and the two old men in the balcony! Of course having young nieces ia a good excuse for going to see the new movie *grin.* The clips seem good and the music brings back a happy less stressful time in all our lives.

Afrochick says:
I was a Muppet Show junkie. You were not famous until you make it to the show. Do you remember when Prince was on the show? I'm excited about finding the nail polishes in my favorite beauty store. Oh btw there is a video for the theme show done by Ok Go featuring the whole cast of the Muppets.

Stephanie says:
This is bringing back memories, I love the muppets and was a Muppet Show junkie; Pigs In Space, The Professor and his assistant Beeker, that crazy singing chef, all the Muuppet Show characters, I have see all the muppet movies on opening day, (now I am really telling my age), The Great Muppet Caper, The Muppets Take Manhattan, etc, from Fraggle Rock, to Seasame Street, The Electirc Company, Zoom, 3-2-1 Contact, Kids Incorporated, Buster & Me, The Great Space Coaster,School House Rock, Villa Alegre it was a spanish TV show catered for children and I always find myself humming that shows theme song. There were some great television show geard toward children of all ages in 70-80's, I remember running home from school to watch the ABC After School Specials. Man why aren't there any shows like these on TV today?

jason @ belts and buckles says:
Did you not see The Muppets on WWE RAW? They were awesome (as The Miz would say) and it just brought back so many memories for me. I'm going to have to buy some Sesame Street DVDs for my grandson now!

Robin says:
I hated the muppets when I was little! This looks a pretty cool kit though. Heh

Tina J says:
Thanks! This Miss Piggy thing here made me laugh and I'm feeling better now, much better that's all clear now from my part too. I'll copy her to my pages. I was thinking of going with the van to school with my son tomorrow and pick him back also later with a ride in the van, but I'm sure I don't need it now. I was just checking on your beautiful mom again to be sure I didn't make another unforgivable but kind of Jerry Lewis mistake again. Sorry for all the trouble I also caused you to prepare all this. Tired, but well now. I'll erase BeFunky gallery n some pics blog tomorrow bye. I'M SO FOND OF MISS PIGGY!