I spent this past weekend with hundreds of thousands of music fans and festival lovers, tromping through the mud at Chicago’s own Grant Park. And it’s basically taken me two full days to recover. 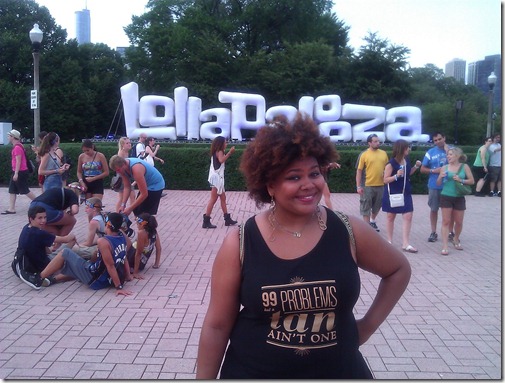 That was me on Saturday. My tee is by Detroit’s own, indie teeshirt label WordPlay. Check them out – they’re awesome!

The annual Lollapalooza music festival is an event I used to watch footage of on MTV and wish I could go to. And now that I’m old enough, I do my best to live that dream every year. Big rock festivals like this can be overwhelming and crazy and if you’re not with the right people at the right time, even a little scary. BUT they’re SO MUCH FUN. In my opinion there is nothing better than an outdoor music festival in the summertime. And Lollapalooza’s right in the heart of downtown Chicago, making for such a beautiful setting.

Allow me to share this year’s highlights – the food, the fashion, and of course the MUSIC! 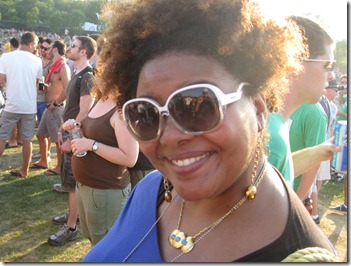 I’m rocking a blue batwing top from Avon here – so lightweight and perfect for outdoor fun! My jewelry is BluBijoux earrings via Max and Chloe, the cosmic necklace from Bita Pourtavoosi – via Sadee Says. And I’m also rocking a necklace by Peace Images!

Best of the Music – As soon as we arrived we headed over to see a band called The Black Angels. Their music is like The Doors meets Velvet Underground. Very psychedelic. The vocals on the lead singer of The Shins gave me chills – they are INCREDIBLE live. We caught a few songs by Black Sabbath (Ozzy’s still got it, amazingly) , and the set by The Black Keys was GREAT. I really dig them.

I really enjoyed seeing Wale live during the BET Awards pre dinner in LA, and I was psyched to see him at Lollapalooza. In my opinion, the set was disappointing. First of all, Wale started late (boo. That’s a big Lollpalooza no no). I wanted to give him the benefit of the doubt after the late beginning, but then Wale spent most of the beginning of the set complaining about his mic not being loud enough. I was like, build a bridge and get over it, sir.  There were all kinds of sound issues and glitches happening during other people’s sets, no other musician complained about it more than you.

Fashion highlights – on Friday, things were still really cute at Lolla. I noticed lots of prints, stripes, and apparently bra tops are back (who knew?).

Best food – Every year ChowTown at Lollapalooza is an experience to be savored. I didn’t love Graham Eliot’s lobster corndog as much as I did the last time (not sure why). But the butter chicken samosas from Suzy Samosas were some of the best festival food items I’ve ever had. EVER. And it was SO AWESOME that Peeled Chicago was there to serve up fresh juice blends for dehydrated festival attendees. Their juices are amazing!.

Lollapalooza day 2 started out as a washout, literally. Because I couldn’t get myself together early enough I missed the set by Aloe Blacc (SO MAD at myself! I heard he was amazing!) By the time we got to Grant Park, it was just in time to get drinks and then hear via word of mouth that the whole fest was being evacuated because of a terrifying storm. Imagine 100,000 inebriated and young music fest fans stumbling out of a massive event and not knowing where to go. And this is barreling down. Yikes. Local businesses were being totally overwhelmed by the influx. Lucky for me, I’m relatively close to the action. We were able to go home during the crazy storm and my amiga Gabifresh took some shelter at my place as well.

And who would have thought – things turned out amazing after the rain! Bands were rescheduled and we were able to check out almost everyone i wanted to see.

Best of the music – We got back to Grant Park just in time to see Fun. – of course We Are Young turned into an epic singalong and their performance was….well…..fun. The main headliners that night were the Red Hot Chili Peppers – I’ve seen RHCP live a few times before and I hate to say it but the experience is always a bit erratic and disappointing. I didn’t love everything I heard and that is sad because I’ve been a fan for years. Ah well. On the way out of Lolla, we heard a bit of Santogold (who sounded great!) and YAY! I got to see Frank Ocean do three or four songs including Bad Religion and Pyramids. His voice is incredible live!! I agree with MTV – he was absolutely a festival highlight.

I didn’t get to stay for all of Frank Ocean’s set, alas – Saturday I ended the night at the Franz Ferdinand/Jane’s Addiction after show and both were incredible. FF can put on a SHOW – it’s all percussion and bass and you just HAVE to dance. And Perry Farrell still has that it factor. Jane’s Addiction served up classics including Mountain Song, Been Caught Stealing, Nothing’s Shocking, and Jane Says. Then I had to go home to my BED. Fun day, fun night.

Fashion trends – I had a fashion revelation on Saturday — I can finally foresee that this whole sheer maxi skirt/dress trend has a shelf life. Conversely, jean shorts are forever. And thanks to this current 80’s fashion revival, high waisted, brightly colored jean shorts are a thing that’s happening again. Yikes.

Food – I loved that there was a Farmer’s Market area with fresh produce, smoothies, and vegetarian delights like tamales, grilled cheese on a stick, and the YUMMY cream puffs from Chicago food truck Puffs of Doom! That strawberry lemonade cream puff was SO GOOD!

This is me, happily sitting on the ground. Which was gross. But luckily our friend Ashley brought a blanket! 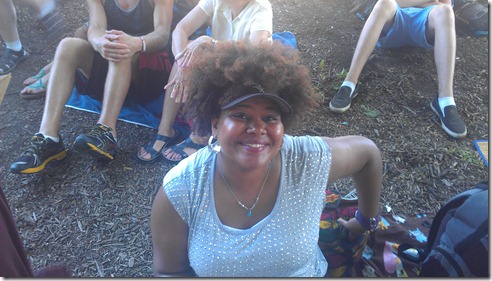 Fashion – The tee you see above is Michael Kors, bought at Nordstrom Rack for a STEAL. And that’s my husband’s White Sox sun visor. Next year I plan to up my sun visor game. The necklace was an anniversary gift from my husband

On Saturday it rained and it was super muddy, and people were literally COVERED in mud. On Saturday I felt sympathy for those people, because weather conspired against them. But on Sunday, I realized that these kids covered head to toe in mud deliberately made the choice to be that way. I don’t get it. Gross. That mud smelled like straight up manure and there were quite a few people covered in it from head to toe.

Fashion revelation #2 – a cute, cotton sundress in light color will make you look like you’re floating in a magical world of your own creation, even if you’re wearing knee high rain boots and tromping through mud puddles.

Food – On Sunday I finally tried the offerings from Australian Truffle and loved their Grilled Cheese Perfection and corn with truffle butter. YUM. Also the big snow cones for sale were not just delicious, they were ESSENTIAL. Thanks to the vendors that made them. Check out Serious Eats for more on the Lolla food, my very good friend Carol Hilker helped to contribute to that post! And big shout out to Sweet Leaf tea – your mint and honey tea is the elixir of life and I might have straight up fainted in the heat without it. Thank you!

Best of the music – On Sunday we set our standards reasonably low and headed to Grant Park in the late afternoon. The first act we saw was Gary Clark Jr. – he’s keeping the blues tradition alive and bringing new life to the art form. I loved seeing SO many fans checking him out, he’s definitely on the rise for a reason. Caught a little of J. Cole and the kids LOVE him – he was at the same time as Gaslight Anthem, so this seemed like a good time to get food and check them out for a moment.

My main focus on Sunday was all about the incredible Jack White. I’ve been a big fan of his since the White Stripes, and his new album, Blunderbuss, is on REPEAT at Casa Afrobella. I love him. I love his all female band. I love his duets with Ruby Amanfu. I LOVE IT ALL. Jack White did NOT disappoint. My husband wanted to be as up close as possible and while it was scary with all the crowd surfing and moshing, it was a musical experience I was so blessed to witness up close.

Incredible. Jack White is a genius. Just to watch him play, to watch his face contort as he decides what to play next, to watch the interaction of these amazing bands he’s assembled….it was an honor and a privilege. And THAT’s why I go to music festivals. For moments like that.

On Sunday night after that epicness, we headed over to the Hard Rock Hotel where some crazy awesome events were taking place.  ckOne was hosting Rock The Vote nights, and every night incredible Lollapalooza acts were performing aftershows. So over at the Hard Rock, I got to chill, sip cocktails by DiSaronno, rehydrate with some Vita Coco and vitaminwater, and then see Little Dragon perform.  Yukimi Nagaro’s voice is perfection. So happy to see them perform and for a great cause – click here to sign up and Rock The Vote!

I had an amazing time this past weekend, and I have basically no Lollapalooza complaints besides the crazy exiting and lack of emergency plan for bad weather. And unfortunately I didn’t get to meet any of the celebs wandering the grounds – apparently Aaron Paul of Breaking Bad and Allison Brie of Community were totally there and I had no idea stars of two of my favorite TV shows were in the midst. Ah well. There’s always next year!

Did you do Lollapalooza? What was your favorite part?