Lately I have been struggling to find the right words, or even the desire to write them. Lately I’ve been feeling a bit disappointed when I read articles about natural hair or hair in general – so many of us are judging each other and policing other people’s choices, it creates an abyss of negativity that I’m finding myself increasingly reluctant to explore. But in light of ALL of the recent articles and media attention on Olympic golden girl Gabby Douglas and the way she wears her hair while in competition, I’m putting on my waders and getting in the water. 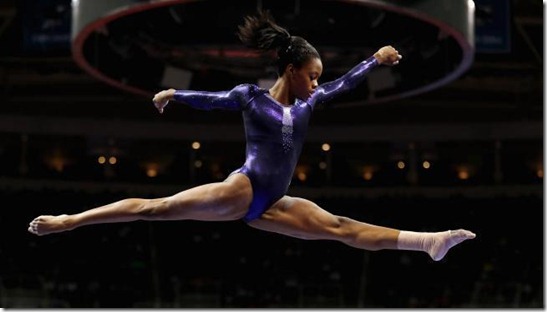 Gabby Douglas is 16. She’s been training insanely hard for the sports event of her young lifetime. She’s lived away from home so that she can focus solely on her training. She just won gold medals for her country at the London Olympics, and will be returning home to an incredible variety of sponsorship and endorsement opportunities. And when you hit Google to enter Gabby Douglas, this is what comes up.

I think it’s a shame that there’s been so much focus on her hair and the minutia of her family life – especially seeing as this same scrutiny hasn’t been paid to her fellow athletes. But Gabby Douglas is a tenacious and tough girl, and she’s been dealing with critics head on. Her quote about the hair non-issue begins my list of the 5 Best Quotes About the Gabby Douglas Hair Issue. 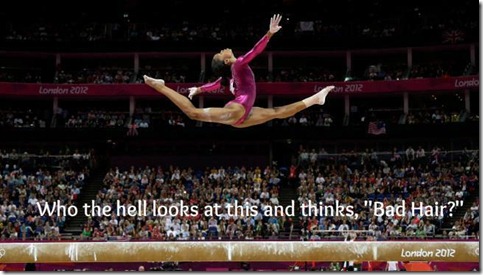 – “I don’t know where this is coming from. What’s wrong with my hair? I’m like ‘I just made history and people are focused on my hair?’ It can be bald or short, it doesn’t matter about my hair. Nothing is going to change. I’m going to wear my hair like this during beam and bar finals. You might as well just stop talking about it.” – Gabby Douglas (via Concrete Loop). 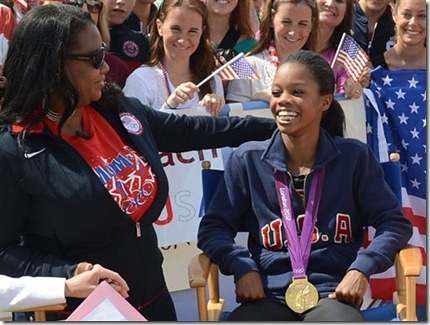 — “She said,”Really?! I won two gold medals and made history and my hair is trending?” So we laughed about it. We made a huge joke out of it and I was quick to try to diffuse that situation. Because I thought, “How ignorant is it of people to comment on her hair and she still has more competitions to go. Are you TRYING to ruin her self confidence? She has to go out there and feel good about herself, and if she feels good about herself on that floor, who are YOU to criticize her? What have YOU done to help contribute to her dream, that you felt it necessary to put it out there so that she could see it.”

At this level in her career, hair is somewhat secondary. It was actually her coach who told me that. I was trying to get her into a hair appointment and I wanted to move her training schedule around and he said to me, “She’s beautiful. You don’t need to change her hair. We need to focus on training. Hair is secondary. We make time for that after training. Don’t mess with my training time.” And then too, I don’t think people realize sometimes that she doesn’t live with me. She lives with a white host family and they don’t know anything about taking care of her hair. And there’s no black salons in their area [in Iowa]–not one. We had to work really hard to find a stylist to come and do her hair.” 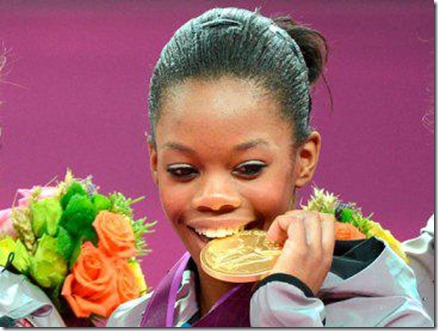 — “Olympians do NOT need to have edges or nice hair. Their talent trumps alladat. I’d give up MY edges for a medal and you would too so stop acting brand new. Honestly, Gabby Douglas’ hair should be the last thing we’re talking about right now. We should be giving her ALL the props for leading the USA women’s gymnastics team to gold and then being the first African American woman to win an individual gold medal in the sport. We should be talmbout how she shows more poise than some adults at the tender age of 16.” – Luvvie, via Awesomely Luvvie. Her post made me cackle! 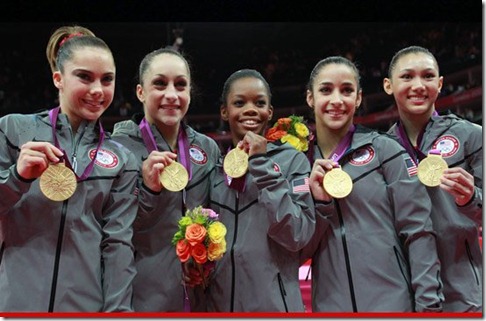 — “It’s no coincidence that hair, one of the most visible markers and symbols of Black women’s difference in a White-dominated culture, has become a focal point of Gabby’s story. The media must forever make an issue of our difference, even in moments of triumph, but never in a way that engages with critical analysis of power and oppression. We’d rather focus on Olympians’ finances than on the fact that the U.S. is virtually alone in denying government funding to Olympic hopefuls – forcing middle-class athletes away from home and to the brink of poverty to achieve their Olympic dreams. Media erasure of swimmer Cullen Jones, the latest “controversy” over Serena Williams’ celebratory crip-walk, and sexist attacks on Lolo Jones are just the most recent examples of how Black athletes at the top of their game are never allowed to simply be great.

But instead about this we’re talking about hair, and the much more significant story of Black girls and women celebrating Gabby and pushing back on racism and sexism in coverage of her has been lost.” — T.F. Charlton AKA @GraceIsHuman via her brilliant essay The Media’s Gabby Douglas Problem, on Ebony.com. 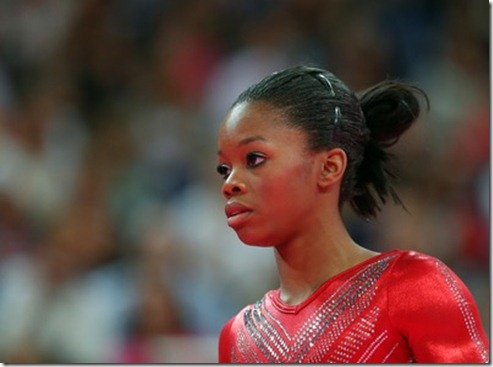 “Anyone who looks camera-ready after a workout equivalent to one-tenth of Gabby’s just isn’t working hard enough. I dare the woman who gets her sweat on at the gym to show me a picture of her looking stellar post-workout. Gabby, meanwhile, has been tumbling, flipping, bouncing — and winning — all across bars and vaults and floors in London. Her hair, whether you love it or hate it, should be irrelevant.” – Demetria Lucas @ABelleinBK for Essence.com.

Yours truly was interviewed on this topic for Fashionista.com – click to read Why Black Female Athletes Just Can’t Win When It Comes To Their Hair…Even When They’re Winning Golds. And in my quote I said, ““I wish we wouldn’t police each other’s hair and beauty choices as much as we do. Let Gabby be great. She already is.”

I sincerely hope Gabby’s been able to shrug all of this negativity off. I think back to myself at her age and I’m not sure I was that strong. At 16, I cared way too much about what other people thought of me. I can’t imagine having the burden of being on television, performing a sport to the best of my ability, and then facing judgment from the world about something so superficial.

Now that her events are all over, I can’t wait to truly support Gabby Douglas and her family. I’m buying her Corn Flakes box and whatever other merchandise she winds up being the face of. This is a young, talented lady with a bright, beautiful future ahead of her. She needs and deserves our support and encouragement. She has made her family, her  fans, and her country proud. I can’t ask for anything more.

« Lollapalooza 2012–The Music, The Fashion, The Food, The FUN
All About Oil Pulling »