It’s 12:34 pm on Tuesday, September 25. I’m still basking in the afterglow of last night’s musical experience. Last night I saw Prince live in concert for the first time. Prince gave me everything on that stage! But still, I left the concert with mixed emotions. Let me tell you why. And let this be a PSA for anyone with Welcome 2 Chicago tickets for Tuesday or Wednesday night. Or anyone seeing Prince in the future. 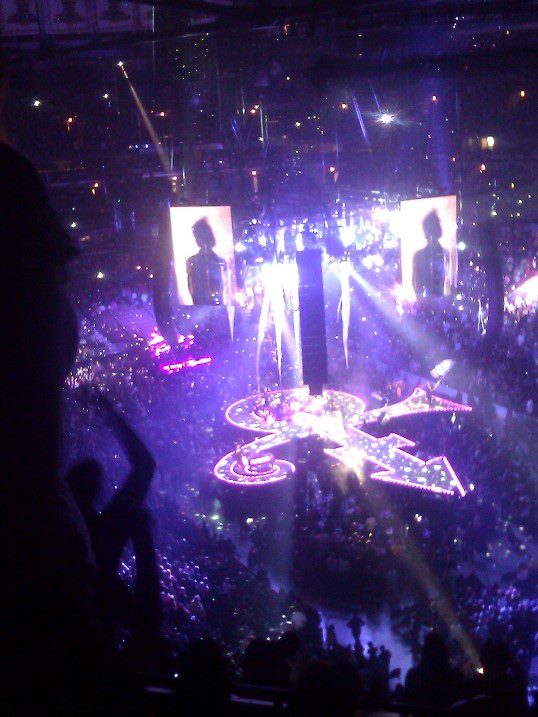 But FIRST, a little backstory. On Sunday night I went to the Andy Allo listening party at the House of Blues. When I arrived I was whisked upstairs to the incredibly plush and beautiful Foundation Room. From the ornately decorated opera boxes we got to hear Andy Allo’s Superconductor for the first time. The tracks are gorgeous! The event ran long and late and I was just about to leave, when Andy took the stage to perform just one song. People Pleaser is funky, old school, and awesome. And if I hadn’t stayed later than I wanted to, I would have missed it. 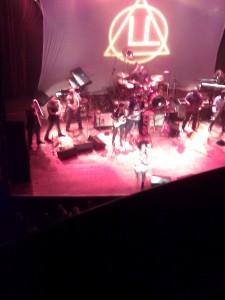 You’d think I’d have learned my lesson on Sunday night, right? I’m getting ahead of myself.

Monday night, Prince kicked off his three night Welcome 2 Chicago tour at the United Center. I can’t even put into words how excited I was! Like a child eagerly anticipating Santa at Christmas. Purple Christmas. That’s exactly how I felt. And you KNOW I turned it all the way up with the makeup, right? All Of My Purple Life was in the HOUSE.

The show was set to start at 8 pm. We got there at 7:45 – traffic around the United Center was backed up all the way to the highway. It was a mess (and if you’ve never been to Chicago’s United Center, a word of advice – drive if you can. Getting a cab back from there is an absolute nightmare). So like I said, the show was supposed to start at 8. Prince didn’t take the stage until 9.

The crowd was so beautiful. I think it was the most diverse concert I’ve been to in Chicago – black and white, old and young, classic Prince fans next to newbies who didn’t know the Seventies hits. Everyone was there for some purple magic and when Prince hit the stage, he came intent to deliver. Clad in a half black, half white suit that reminded me of the Batdance era, Prince looked GREAT. He’s fit and sharp and his press and curl was styled to perfection. His voice is as on point as EVER. The band is TIGHT. And you can tell Prince runs a tight ship. At times his performance was evocative of James Brown. The backup singers gave pure life to the vocals — the bald, beautiful Shelby J was definitely a stand out. She gave it ALL on that symbol shaped stage. Prince started out the night on a jazzy tip, easing fans into the hits to come. He offered musical tribute to acts that influenced him – Curtis Mayfield, Aretha Franklin, and in a surprising choice, the backup singers performed a cover of Sarah McLachlan’s Angel turned all the way into a full gospel soul recreation. The backup singers also did Michael Jackson’s Don’t Stop Till You Get Enough and that was awesome.

And then there were the hits, the songs the audience screamed for. Kiss. Cream. Raspberry Beret. Prince performed hits he wrote for others, including The Time’s The Bird and Jungle Love, Sheila E’s The Glamorous Life, and Sinead O’Connor’s Nothing Compares 2 U. His between song banter was at turns encouraging and fun (Prince THRIVES off audience participation and loves to see the crowd, so he performed several songs with the house lights turned up so he could see us). But it’s clear that working with Prince would be tough. He’s a legend for a reason, and he knows it. So when he made declarations like “I don’t NEED your love, but I WANT your love. I don’t NEED to be here. But I WANT to be here,” I couldn’t help but think of what it’d be like to work behind the scenes on putting together a concert like this. I think it’d be tough and demanding and intimidating.

From a fan’s perspective, the evening was amazing. Prince finally brought out Andy Allo to duet on Take Me With U (I was REALLY hoping she’d perform a set of her new songs from Superconductor)! Purple Rain turned into an epic crowd participation sing along, and then Prince left the stage but came back for an encore shortly thereafter. Like he said during the encore, “We have too many hits!” Instead of performing one or two, he offered a medley that included extended performances of some songs. Despite the brevity of the songs, that encore was EVERYTHING. When Doves Cry. Nasty Girl. Hot Thing. A Love Bizarre. If I Was Your Girlfriend. He even teased Darling Nikki and the crowd LOST IT. And then Prince descended into the stage via the trapdoor/elevator. It would have been such a perfect end to the show right then. If we’d left at that moment, it would have been perfect.

After Prince left the stage, the house lights didn’t come back on. The stage remained illuminated. The crowd stayed and screamed and clapped and chanted in the dark, still brimming with anticipation. Nada. We sat and waited. 15 minutes. 20. 25. 30. This dude swept the stage for more than half an hour. Nada. The annoying guy sitting next to me kept braying “PRINCE” at the top of his lungs and basically in my ear. It was after 11:30. My husband had to go to work early the next morning. We started heading for the door.

Near the exit I saw a familiar face — ChiTown Fashionista contributor @MisterTyler. We were chatting and waiting for the music to start back up and debating whether or not we should leave…and then the house lights came on. YO. People were SO MAD. Cussing and yelling and stomping out of there angrily. It isn’t fun to leave a concert on a low note, especially something everyone was so excited to witness. We figured our way out to the car and out of the traffic quagmire. We made our way home. And right as we were about to park the car, via Twitter…I learned that Prince came back after fans waited an hour, and did another encore, performing 1999 and Little Red Corvette to an extremely diminished crowd.

So Chicago fans with tickets to tonight or Wednesday’s Welcome 2 Chicago shows, learn from my mistakes. Apparently die hard Prince fans who have seen him perform before already know that like the end of every superhero comic book movie, you gotta stay past the end credits. The encore may take forever and a day but it is coming, and you should stay put until security tells you to leave. Apparently Prince has been known to return for multiple encores.

But also apparently, you shouldn’t pay money for the aftershow, because you may not get what you paid for — fans left the House of Blues aftershow pissed off to no end. SO glad I didn’t try to go to THAT.

So what are my final takeaways from the Prince concert experience? If I had long money, I’d be there Wednesday night to see Janelle Monae open for his Purple Majesty. There were peaks and valleys to the concert experience. I was disappointed Andy Allo didn’t get to sing more. I was disappointed in the is-he-or-isn’t-he encore shenanigans. But I was overjoyed to finally see Prince in concert. This was a musical experience high up on my bucket list. Next time, I’ll just wait until he’s gotten ALL the encores out of his system.

Did you go to Welcome 2 Chicago? What did you think??