She’s got a gorgeous face and a heavenly voice, and the kind of full, fluffy hair that inspires awe and admiration when you see her. And I can report from experience, when you meet her she is lovely, sweet, gracious and friendly. In a nutshell, Andy Allo is awesome. 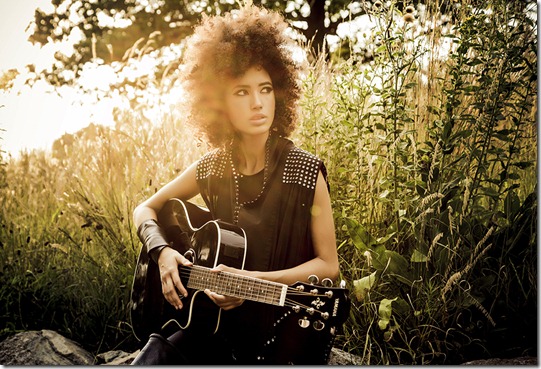 Who is Andy Allo? She’s a singer/songwriter from Cameroon. Her upcoming album, Superconductor, was executive produced by Prince, and features six self-penned tracks by Andy, with three songs co-written by Prince – “Superconductor,” “The Calm” and “Gone.” 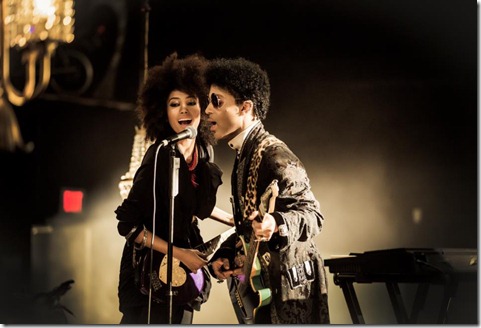 Yep. Prince. Andy Allo has been cosigned by The Purple One himself. She sings with him (the photo above is from Andy’s Facebook page). She works with him. She’s a guitarist/vocalist in his band, The New Power Generation. And when the Welcome 2 Chicago tour comes to town, Andy Allo will be opening for Prince, and debuting live at Prince’s after-jam on September 24. She has nothing to worry about. From what I’ve seen, she’s AMAZING live.

I’m so glad I didn’t know all of this when I met Andy. I met Andy Allo at the Essence Women in Hollywood luncheon and she was drop dead gorgeous and I could see the “it factor” just radiating out of her – but I didn’t know who she was just yet – she was just down to earth and normal and friendly and we chatted and hit it off. Which is great because had I known, I would have rambled her ear off about how much I love Prince and my purple MAC lipglass and maybe we wouldn’t have become Twitter friends (follow her @AndyAllo!) and this here interview might never have happened. But HOORAY, it did! 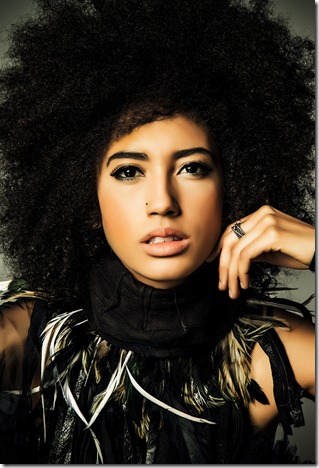 Afrobella — Your voice is so lovely and you’re so beautiful, Andy! Talk to me about your musical journey thus far – you’re from Cameroon! And now you live in Los Angeles and you’re working with PRINCE. It’s like a fairy tale come to life. How did you get here?

Andy Allo — I came from a distant land and journeyed a long 22 hours to the Americas. It’s been an interesting journey to say the least but once I discovered that I had been given a gift: The gift of song and songwriting, there was nothing else for me to do but sing and write songs. It’s in my blood.

Afrobella — Talk to me about working with Prince – how did that come to be, and what is it like? (I’d be so nervous around him, I think)!

Andy Allo — Oh no, not at all. You know that feeling when you’re around some one who’s wiser and whom you have an immense amount of respect for, you just kind of just sit quiet and listen while inside there’s a little person doing the Harlem shake and singing. That’s how it is.

When I joined the New Power Generation, it was a challenge in every sense. It was my first tour, first time playing music I had two weeks to learn, first time playing in front of 60,000 people and I loved every minute of it. In fact, I’m addicted to touring and can’t wait to get back on the road.

Afrobella — I take it that might be sooner than we think! Will you be joining Prince when he comes to my side of town for Welcome 2 Chicago?

Andy Allo — Absolutely! I can’t wait to be in the home of blues, deep dish pizza and steppin’! I’ve only been to Chicago once but this time, this time will be very special because… I’ll be debuting music from my new record SUPERCONDUCTOR.

Afrobella — There’s so much chatter about you on the prince message boards, “is Andy the new Wendy” etc etc. Is there anything you’d like those fans to know and understand about you?

Andy Allo — It’s always harder for the new girl in class. Prince was touted as the next Stevie Wonder when he first started. But Like a reggae woman, I just boogie on!

Afrobella — Your hair is full and fabulous and free – but I’ve seen photos of you earlier in your career with straight hair. How’s the hair journey been? What are your favorite products?

Andy Allo — My hair soap opera began with braids and cornrows actually. I use that term, because in a soap opera, a character will die and then be brought back to life, or someone will do something terrible but then get a second chance. An example…I remember, “dying” my hair black blue and from then nursing it back to health for about a year. I won’t be doing that again.

I actually began flat ironing my hair fairly recently, and only did so to get an even trim but now, I’m going to try trimming my hair curls without using the iron. I’ve never used a relaxer in my hair and am so happy when I hear about people transitioning because those chemicals are very toxic. I absolutely love being natural.

I don’t know what I would do without Herbal Essence’s “None Of Your Frizzness”. It smells amazing but also leaves my hair incredibly soft!

Andy Allo — Just let it go… Let your hair do what it wants to.  If we fight with our hair, sooner or later- it departs.

Afrobella — How would you describe your style?

Andy Allo — Oooo… I have fallen in love with fringe…. Hmm mm mm! These days, I am channeling Africa and Fringe.

Afrobella — I know many up and coming artists must look to someone like you and want to BE you. What’s your best advice for someone trying to break into the industry, who looks to you and your career as inspiration?

Andy Allo — I’m learning from the greats. They should too. “This ain’t no play game” so if you decide to get in the ring…be ready.

Afrobella — Talk to me about Superconductor, you must be SO EXCITED!!! What is the new album like, and what can we expect to hear?

Andy Allo — I’m beyond thrilled and cannot wait to share this music with everyone. Superconductor has a bit of old school, funk and a LOT of soul. These songs,  I hope, will last for generations. There’s something for everyone. I was blessed to collaborate with Prince and The NPG on this project and I found that our styles were very complimentary.  There are some compositions and arrangements on this record that make you want to scrunch up your face, dance and/or fall down. The first single, People Pleaser, featuring Maceo Parker and Trombone Shorty is almost confrontational it’s so funky. I can’t wait to share it.

Afrobella — What’s next for you, Andy?

I cannot WAIT for Superconductor – and I’m not the only one! Check out what Ledisi had to say on Facebook!

For more on the awesome Andy Allo, check out alloevolution.com, follow @andyallo and “like”  www.facebook.com/andyallo. Oh and click here to visit her iTunes store – Superconductor drops soon!

CHICAGO, did you get your Prince tickets yet?? Get them ASAP and know you’re supporting a good cause – the Welcome 2 tour is in support of the Rebuild the Dream foundation, founded by Van Jones, whose mission is to mobilize thousands of everyday people who come together to build strong vibrant communities, and to fix the U.S. economy from the ground up. Click here to learn more!

ALL photos by photographer: Justine Walpole