In case you took a social media break over the weekend and missed the explosion, Beyoncé released a new album when absolutely nobody was expecting it. 17 songs. 14 videos. And all she did was post a sneak preview video on Instagram and say “surprise!” She sold 450,000+ in the first day. Her latest release is officially now iTunes fastest selling album ever. Her new album will be number one on Billboard’s chart this week. Number one in 104 countries, in fact. Not a bad way to close out 2013, right? You can click here to buy Beyoncé’s latest. 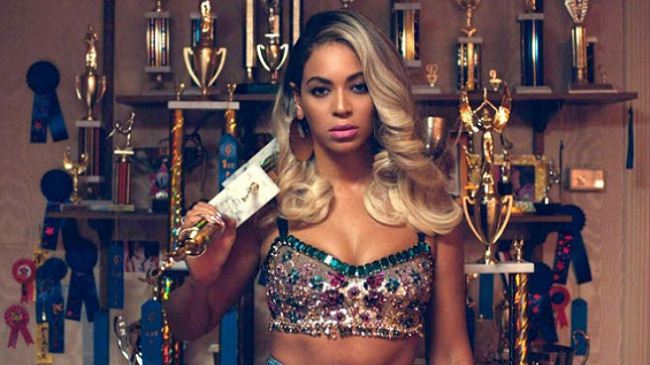 Video screen capture via The Grio

Since Bey dropped the social media bomb, everyone has had something to say about her new content. Folks are up in arms about the explicit nature of her content (hey, she told us all she’s a Grown Woman. She can do whatever she wants). People are parsing the meaning of her lyrics, debating whether or not she’s a real feminist, and comparing her success to that of other artists – the stages of dealing with a Beyoncé event played out not just on Twitter, but everywhere.

I found myself very inspired by Beyoncé’s new album, in terms of the production and the release of it all. The secrecy required. The behind the scenes work that went into it. I wound up tweeting all about that, caught up in the frenzy like everybody else.

I’ve been marinating over the album release and the album itself all weekend long. Been watching my friends and peers in the blogosphere discuss and intensely debate Beyoncé’s lyrics and looks in the videos, trying to make sense of what she’s trying to say and what it all means. I’m not here for that today. What I am here for, are the lessons about work and passion and achievement that are undeniably there in Beyoncé’s successful social media experiment. Here’s what I learned about success and achieving goals, when Beyoncé released her album via Instagram with no prior warning.

1 – Don’t talk about it. Just be about it. In fact, shut up about it until you’ve got something to actually talk about.

2 – Never be afraid to step your game up and take your craft to a higher level.

3 – Keep a close counsel and protect your vision.

5 – Switch things up and keep the people guessing.

6 – Be ambitious. You set trends that way.

7 – Let them talk. They’re gonna talk anyway. Your best response is in the work you produce.

Quite honestly, I’m inspired. Say what you will about Beyoncé in any other capacity, but you cannot deny her work ethic, her boldness of vision, and her incredible capability to inspire emotions. I just want to thank her for inspiring me to work harder and smarter.

There are MANY very interesting longform thinkpieces about Beyoncé’s latest album circulating online. Here are a few I thought worth reading and discussing:

Loving “Beyoncé ” as a Black Woman, via Salon

You Have To Listen to the Powerful Feminist Speech Beyoncé Samples On Her New Album, via Buzzfeed

Beyoncé’s New Album Should Silence Her Feminist Critics, via The Guardian

Why White Feminists are Mad at Beyoncé , via The Gloss

How Beyoncé is Re-Defining and Re-Branding Feminism, via Think Feminist.

What are your feelings, bellas?