When I was backstage at The Queen Latifah Show last month, I had no idea what to expect. I came to visit my friend Sam Fine, that’s it and that’s all. When I was back there I found out that one of my favorite new celebrities was going to be on the show. Lupita Nyong’o is such an amazing actress and such a breath of fresh air! I absolutely love her style, her personality, and she utterly broke my heart as Patsey in 12 Years a Slave. Lupita’s talent is huge and her future in Hollywood is incredibly bright. I know I’m not the only fan who’s rooting for her to win the Academy Award for this, her debut role!

Lupita was so inspiring and eloquent in her interview with Queen Latifah and I longed to meet her and take a photo backstage, but by the time I got there she was being ushered out with her team. And then I saw my friend, legendary hairstylist to the stars Ted Gibson. He’s officially part of Team Lupita and that made me so happy! Ted Gibson is a hair genius, and even more than that he’s just a really warm, wonderful, loving person. It filled me with joy to know that Lupita is in such good hands. And clearly they love working together. Look! 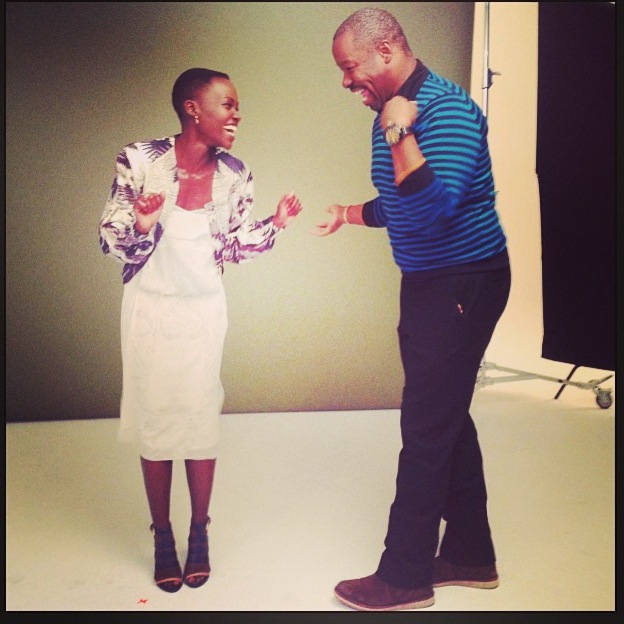 Ted Gibson is a hair guru with popular salons in both New York City and Fort Lauderdale. He’s worked with major A-list stars. From Anne Hathaway and Angelina Jolie to Gabrielle Union and Zoe Saldana, Ted has blessed some of the best. I’m SO excited to know that Lupita’s hair is in his hands for award season and beyond. I had to reach out to Ted to get the  scoop on styling Lupita Nyong’o, and his best tips for styling short natural hair in general. Lupita proves that a classic TWA can be styled and shaped to be just as fly as you wanna be. Ted Gibson broke it all the way down for Afrobella readers in this exclusive interview.

Afrobella – Tell me how the relationship with Lupita began, because she’s so meteoric in her rise and now she’s got an amazing team behind her. It’s like it all came together, like BAM. At least that’s what it seems like.

Ted Gibson – Last fall was when I first started working with her, for press for 12 Years a Slave. And it was just so nice to have met her. And the first day I remember working with her, I ended up going to a showing of the movie that night and I came back a changed man. It’s such a powerful movie and her performance is astounding. It’s inspiring to work with her.

Afrobella – What I find so inspiring about her is the response from women of color. Her work speaks for itself. She is so elegant and eloquent, and she’s also representing this natural hairstyle which is something you don’t see frequently on the red carpet. Can you speak to that as a stylist – is that just who she is, or was this a decision? Because I know women in Hollywood frequently have to make this decision.

Ted Gibson – it’s so true. I love the fact that what Lupita is doing is she’s not trying to be something other than what she is. Natural hair is a phenomenon – absolutely and it works for some women, for some women it doesn’t. A few years ago Lupita decided she didn’t want to relax her hair or color her hair anymore, especially relaxing it. So she cut it all off short and the rest is history. I cut it, I trim it up, I fade it out. It’s great to see a difference. She owns that. It’s not put on. She owns that. It’s who she is and it’s just great.

Afrobella – for me, it reminds me…it’s very evocative of a young Cicely Tyson, a young Jenifer Lewis. You don’t usually see many celebrities wearing a short natural look. Viola Davis is also rocking a short natural these days too. Do you think this is a trend that’s beginning? How do you feel about that?

Ted Gibson – Like I said, I think natural hair works for some women and for some women it doesn’t. I think that it really depends on what kind of woman you are. A woman who has relaxed hair and a weave, it’s something that she desires to be. I really feel like women are complicated creatures and at different stages of her life – if a woman is in her 40’s, she can look back on her life and see where she was at, in different stages and tell what she was going through at the moment. Hair in general can dictate how a woman feels about herself, or her stage in life. So I’d say natural hair is a trend, definitely. But it’s also something that will be around for a long time. We’re in a time where we don’t all have to confirm to a certain identity. Beauty is individual. I love working with women who don’t necessarily have to be cookie cutter to what society says they should be.

Afrobella – Can you talk a little bit about styling Lupita – she’s got very short hair, and you said you fade it out and trim it. What kind of products would you recommend for someone looking to maintain that kind of style?

Ted Gibson – Lupita loves oil, she loves natural oils which is essential because natural hair can lack luster and be a little dry because it’s not processed. So I believe it’s important to use leave in conditioners, also not to shampoo it so often, rinse it if you want to but don’t necessarily shampoo it. I use a lot of shine sprays and emollients on her hair to bring out a brilliant shine. And it’s fun to be able to change it, that’s what’s great about Lupita. People think just because you have short hair it means you can’t change it but that’s not the truth, you absolutely can!

It’s important to have a mixture of products. I use several different things to get the look that I want. I like a wax that has some hold to it, I like a grease that has high emolliency, and a hairspray for light hold.

Afrobella – I notice subtle differences in her style, it’s about the shape, the way you part it. I love that she is fly, fabulous and rocking a very short ‘do that you CAN change up, natural hair doesn’t have to mean only one look.

Can you speak to what’s next for you? Because you’ve got so much going on, I don’t know how you manage it all.

Ted Gibson – I’m working on several shows for fashion week, I’ve got Carmen Marc Valvo, Pamella Roland and Lela Rose. I’m excited about fall fashion because the designers take a few more risks. I’ve got Lupita and Hailee Steinfeld, and a lot a lot a lot of things going on there. And then of course my New York and Florida salons.

Afrobella – Can you speak quickly and give a hint as to Oscar hair?

Ted Gibson – Well, with Oscar hair – the thing about the Oscars, Awards Season in general it’s always important for the team to come together as a collaboration and decide what the look will be. The dress dictates essentially how the image is going to look with the hair and the makeup. So I don’t come in with any preconceived notions about what it’s going to look like. The fun is to show up with my big tool kit with an arsenal of things to put into the hair to make a difference. I try not to work from a place where it’s like; I’m going to do this, because it won’t go that way.

Afrobella – I can’t wait to see what she’s going to wear, it’s going to be amazing!