If you’re looking to cop a piece of black history for your archives, keep an eye out for the final print issue of JET Magazine, which hit newsstands today, Monday June 9th. 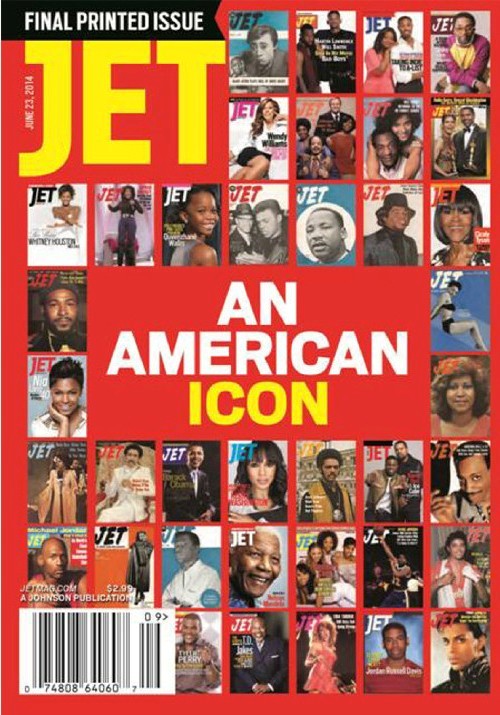 This final issue is a tribute to the past 63 years of publication, a dedication to the years that JET was the publication of note for the African American community. Here’s what’s in it:

• A letter from President Barack Obama and First Lady Michelle Obama
• A tribute to the late Maya Angelou
• Recognition of some the biggest celebrities on the pages of JET, such as Harry Belafonte, Sidney Poitier, Bill Cosby, Whitney Houston, Spike Lee, Diana Ross, Halle Berry, Beyoncé, Tyler Perry and more
• A montage of the best JET beauties and the best of the “Week’s Best Photo”
• The top music albums from the 1950s to the present
• Fashion and style influences over the years
• Coverage of African-American history, from the civil rights movement to a special investigative report on missing Black children.

“This issue serves as the final bow to everything JET has done over the years,” stated Mitzi Miller, the former editor-in-chief of JET magazine, now editor-in-chief of EBONY.  “From politics to entertainment, JET magazine has had a tremendous impact on society and shaping conversations within the African-American community,” she added.  “I’m very proud of the work I’ve accomplished over the past three years, and excited to see JET now continue this tradition in a digital platform.”

I will admit, it makes me sad to see JET magazine shuffle off the newsstands for good, after having held us down since 1951. However, it’s a kind of wake-up call to publishers and to purchasers – being around for decade after decade isn’t a guarantee that you’ll  be around forever. Not anymore. If we as readers want our print publications to stick around, we’ve got to support them by buying and subscribing to them. If publishers want their print publications to stick around, they need to stay fresh, stay focused, and recognize the evolving needs of the readership and give us something to truly look forward to, something worth buying regularly that we can’t get online.

I will miss JET in print, but I have really high hopes for Ebony with Mitzi Miller at the helm. She’s a genius and I’ve been an admirer of her work since the days of Jane Magazine and Honey. Mitzi rocks and Ebony is in great hands. And fret not for JET — they’re going 100% digital!

Via JPC: “JET is launching a new weekly digital magazine app to address the needs of its readers to get information quickly and easily. The new app, scheduled to launch June 30, will be available on all tablet devices and mobile platforms. The content will feature breaking news and strong entertainment content, along with politics, pop culture and social issues that impact African-Americans, as well as a new EBONY/JET digital store.”

JETMag.com is already producing some new and cool content, like the Beauty School page which features awesome posts from my friends like Dre Brown and Nicole Townsend! Check them out!

What do you think, bellas and fellas? Will you be copping this issue of JET Mag, for old time’s sake?