“Caring for myself is not self-indulgence, it is self-preservation, and that is an act of political warfare.” Audre Lorde made the declaration in the epilogue to 1988’s A Burst of Light, and today that quote has come to resonate in the online community. You see it shared on Facebook, Pinterest and Instagram, but what does it really mean? How many of us who talk about self care are doing more than just talking? This is why I have so much admiration and respect for the ladies of GirlTrek. Their movement LITERALLY moves. They talk the talk and walk the walk. 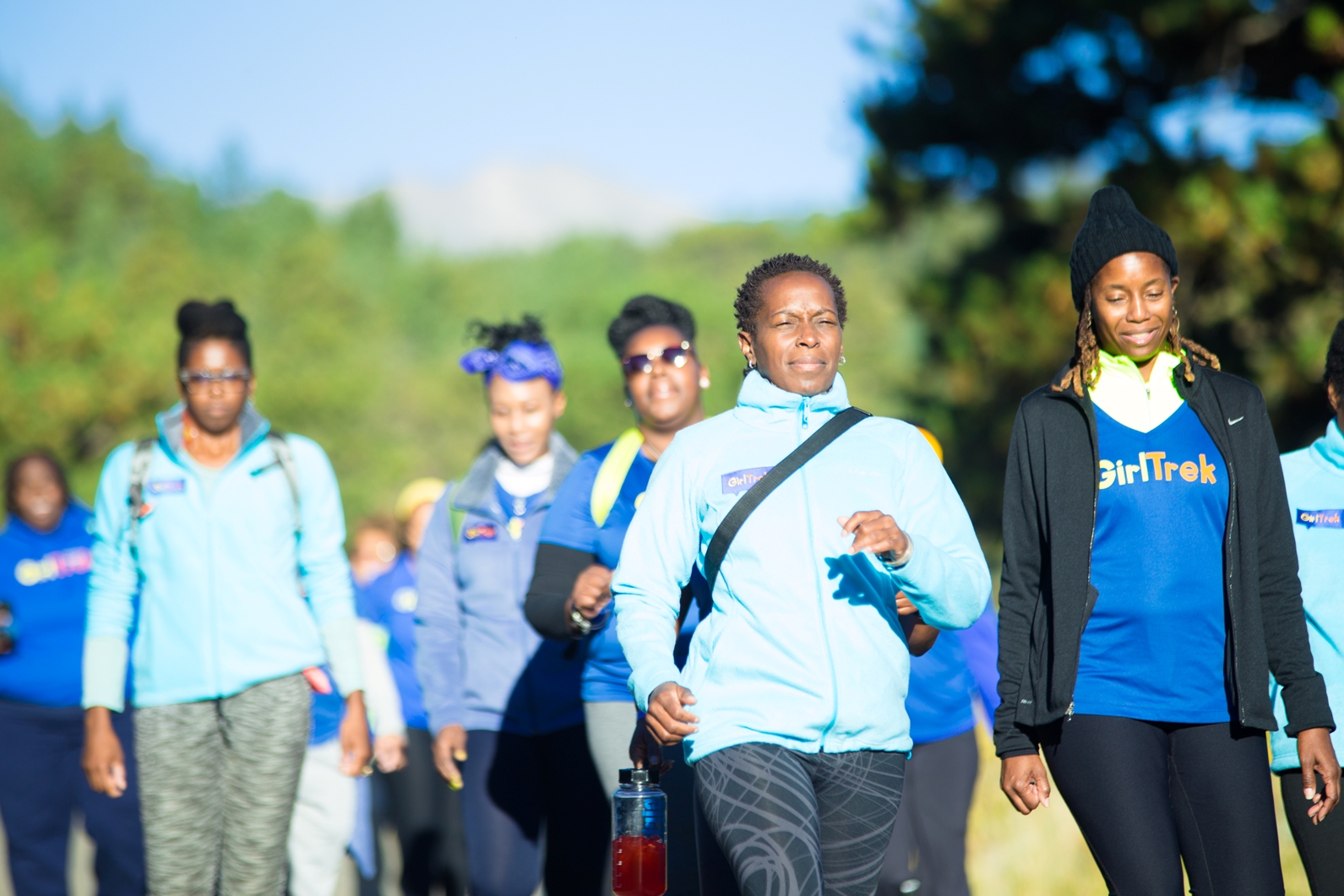 What IS GirlTrek? Via NBC: “…a campaign to inspire one million Black women and girls to take walks in their neighborhoods as a declaration of self-care, a practical step toward healthier lives and a historic strategy of collective action.”

I’ve heard such amazing things about GirlTrek in Chicago, these ladies are out here DOING IT – walking as a group and empowering themselves and their community, sometimes despite the elements. Right now, April 2nd these sisters are out here walking in the snow. It may sound hardcore, but it’s about being consistent and visible. 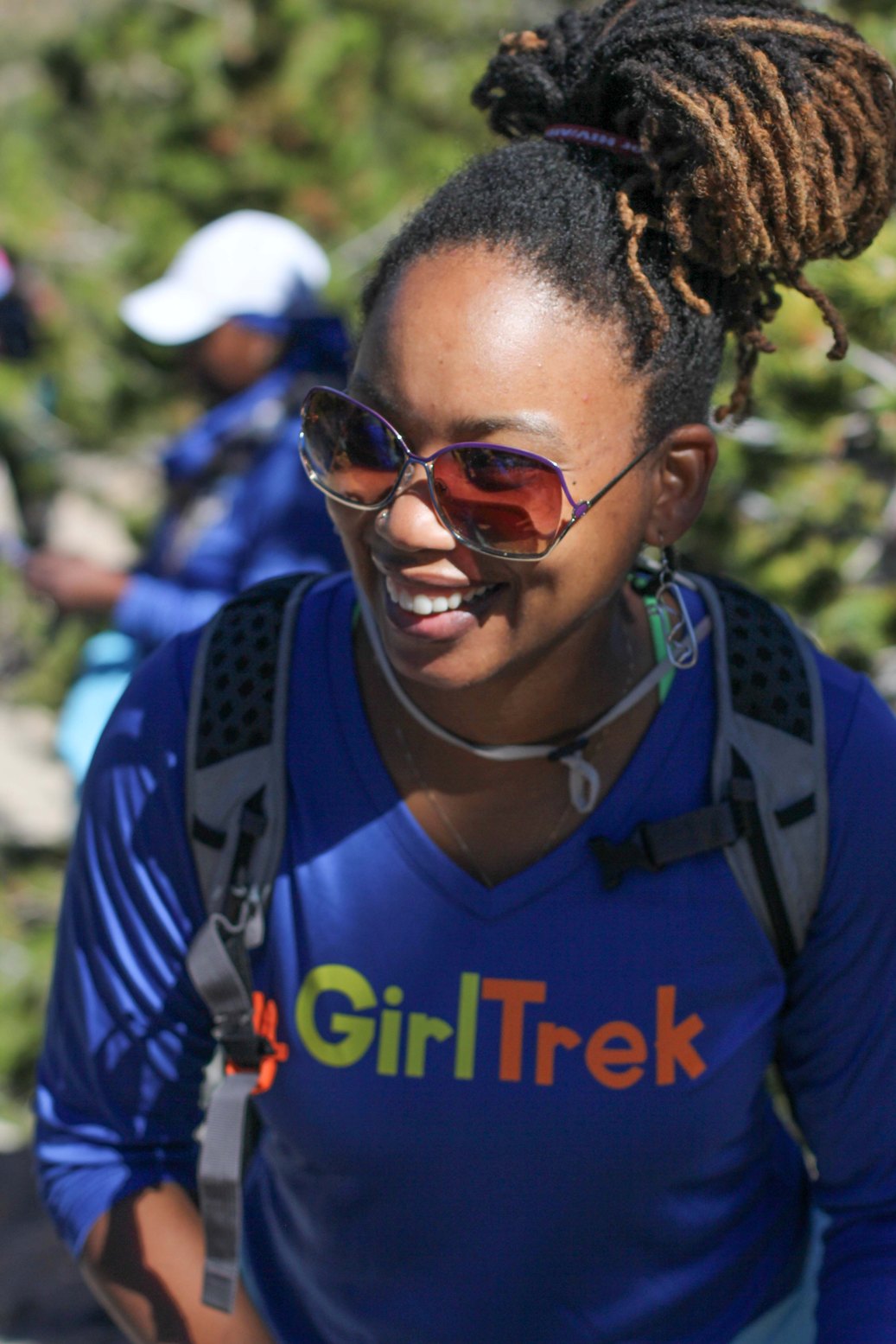 In the course of researching and writing this, the ladies of GirlTrek woke me up to some scary statistics. These stats were sent to me via GirlTrek. Read them and feel the same chilling concerns I did:

African-American women are disproportionately affected by preventable obesity-related diseases and are dying at higher rates than any other group of women in America.  According to the CDC, 80% of Black women are currently overweight and 53% are morbidly obese. In the Journal of Obesity, Dr. Michael Garko projects that 90% of African-American girls, ages 6-11, will be overweight or obese women by 2034 unless diet and activity levels change.

2/3 of us engage in no leisure time activity. The issue is not obesity, but inactivity. According to a recent study in the American Journal of Preventive Medicine by Drs. Deborah Rohm Young and Carolyn Voorhees “African-American women, as a population subgroup, are predominantly sedentary. National surveys show that two thirds of African-American women engage in little or no leisure-time physical activity. This high prevalence of physical inactivity contributes to the disproportionate burden of obesity, hypertension, diabetes, and coronary heart disease in this group of women. Strategies are needed to engage African-American women in physical activity to reduce risk of chronic disease and premature mortality.”

The ladies of GirlTrek have declared this month to be #ActivismApril, and their goal is to be 1 million strong by 2018. Click here to register and take the GirlTrek pledge (it’s free)! I reached out to the ladies who founded the movement the day before Supersize Superhero Saturday – the first Saturday and the official kickoff of the #GirlTrek 2016 Trekking Season. Co-founders Vanessa Garrison and T. Morgan Dixon shed some light on their movement and gave me great reasons to share with my fellow Afrobellas. 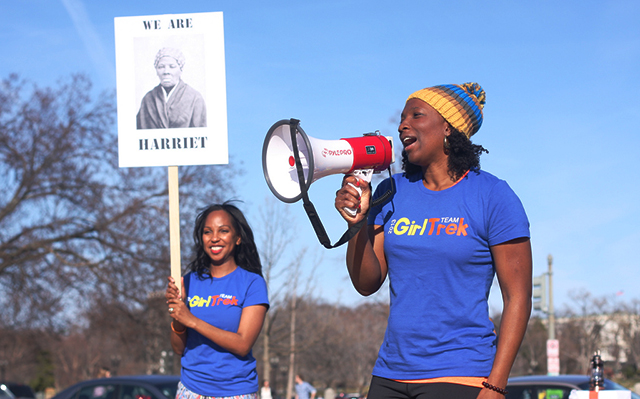 GirlTrek has become a movement nationwide, and you’re still growing. What do you want more women of color to know about GirlTrek? What do you want to say to those of us struggling to get active, or still looking for motivation?

“Eighty two percent of Black women are over a healthy weight. We carry the weight of the world. We die younger and at higher rates than any other group of women in this country from preventable disease. GirlTrek can change that. GirlTrek will change that,” says co-founder, T. Morgan Dixon. “We’ve come too far. This crisis ain’t nothing compared to the road we’ve traveled. Each day we walk away from traumas of chronic stress, generational poverty, addiction, unemployment, failing schools, mass incarceration. Each day we walk in the direction of our healthiest, most fulfilled lives. We are worth it.” 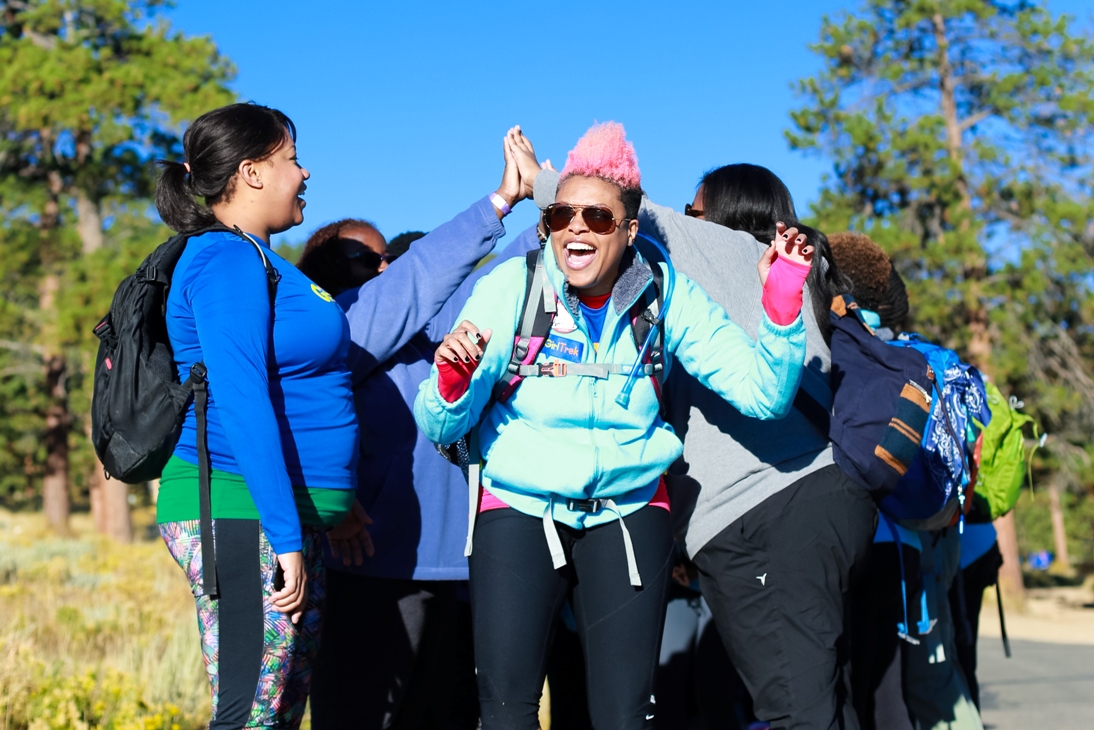 What is your goal with #ActivismApril?

?“The reality is Black women and girls are living under some trying circumstances in today’s world. They live in communities that are under extreme stress whether it be from crime, health disparities, blight or even gentrification,” says Vanessa Garrison, GirlTrek co-founder. “In the month of April, as women get active, we want them to audit their communities and present their best ideas for building healthy, safe, sustainable neighborhoods.”

“We believe that when these women become active that they become powerful agents for change and GirlTrek is here to support them in community service by investing in the solutions they have to improve the world around them,” Garrison says. “Walking will bring about change and it will bring healing in a time when it is so desperately needed.”

For those of us now learning about #ActivismApril, is it too late to participate? How can we be down?

“It’s not too late to sign up for GirlTrek. Our 2016 official walking season starts on April 1. Go to our website, girltrek.org, to find a walk near you and if there’s not one, we can help you organize one,” Dixon says. “In order to qualify to win $1,000 in seed money for a community service project, women must complete the 30-Day Jumpstart challenge; a fun, ‘scavenger-hunt’ style walking competition where participants must complete 20 walks in 30 days.  After completing this challenge, the participant will earn the coveted golden shoelaces, a significant accomplishment in the GirlTrek universe and will then be eligible to win the $1,000 in seed money.”

What are your goals for GirlTrek? What do you hope the future holds?

“Our goal is to get 1 million Black women and girls walking in the direction of their healthiest, most-fulfilled lives by the year 2018. There is no question that walking works,” Garrison says. “Together, GirlTrek volunteers from Seattle to Washington D.C. and Baltimore to Oakland, Calif. have inspired 250,000 supporters and more than 50,000 walkers from across the country to lead more active lives through establishing a routine of walking. For these women, walking has become a keystone habit that leads to a cascade of tiny rebellions against disease by developing healthier life practices such as eating better, spending less time alone and increased Vitamin D intake due to being out in nature more.” 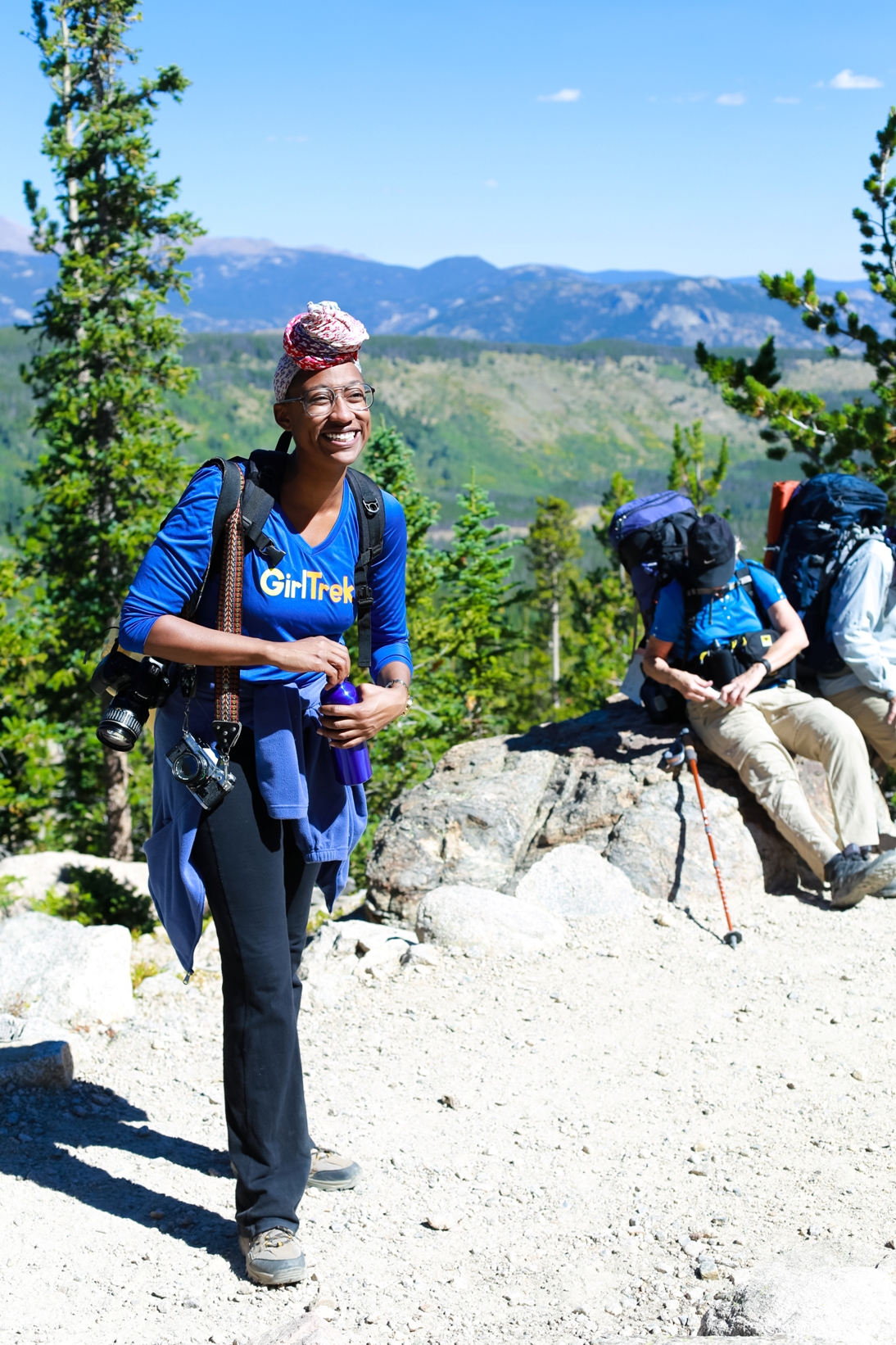 I love the concept of the movement. It’s something accessible, relatively easy, and extremely meaningful. To learn more, sign up and find a group near you, visit GirlTrek.org.

« Inside Empire – Behind The Scenes With COVERGIRL and Vogue Studio!
7 Times That Prince Shaped My Life »