Why I Rock The Red Pump Today and Every Day

It’s one thing to look at a charitable group from the outside and want to support them because their ambitions seem noble. It’s another to know the founders of that charitable group, to know their hearts and minds and ambitions are truly in the right place, and to support them because you’re a true believer in them and in what they stand for. It’s that knowledge and that belief that led me to The Red Pump Project. 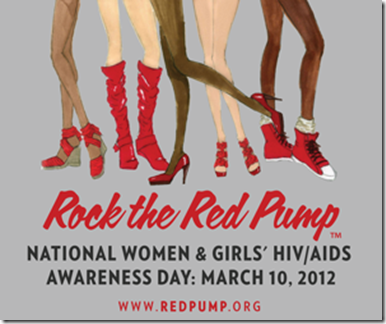 Tomorrow, March 10 2012, is National Women & Girls’ HIV/AIDS Awareness Day and around the country there will be rallies, panel discussions and testing facilities open to one and all. Online, bloggers are showing their support by rocking the red pump virtually as part of the annual Rock the Red Pump Campaign. If you’ve been reading Afrobella in the past few years then you know, I rock the Red Pump every year. It’s been nothing short of inspiring, watching the campaign grow from strength to strength. Now there are ambassadors and events in major cities throughout the US. Luvvie and Karyn as co-founders have appeared to speak on television and at major AIDS awareness events. And now celebrities are also supporting the cause. Look at what Alicia Keys tweeted today!

So what keeps me rocking the red pump every year?  It’s about more than just supporting my friends and wearing cute red shoes. It’s about the troubling statistics.

HIV/AIDS disproportionately affects minority women in the United States. According to the 2005 census, Black and Latina women represent 24% of all US women combined, but account for 82% of the estimated total of AIDS diagnoses for women in 2005.

HIV/AIDS is the leading cause of death for Black women (including African American women) aged 25–34 years.

And where I am from is a particularly hard hit region. According to Wikipedia, in the global AIDS pandemic, the Caribbean is the second-most affected region in the world.

The work that The Red Pump Project does to erase stigma, address the issues, and raise awareness particularly in that key demographic, is why I stand with them.

And I encourage you to join me! Today and tomorrow I will be wearing red shoes in solidarity with the cause. You can post your own photos on the Red Pump Project Facebook page. If you are also down for the cause, you can follow @RedPumpProj on Twitter, or visit their official site here.

How will you commemorate National Women & Girls’ HIV/AIDS Awareness Day?

Lisa Stone says:
Right on, Afrobella, thanks for your great post. I have been a huge fan of Lovette's since she and I hung out at BlogHer '10. These women are living their warm, loving commitment to women and girls with HIV/AIDS, and it's a call to action for us all. I am so impressed by the work of @RedPumpProj.

pets says:
Good to see Social Media linking in a strong and positive way with worthy causes! Thanks for this.