It’s been a little more than month, since 17 year old Trayvon Martin was murdered. He was walking home with Skittles and an Arizona Ice Tea, talking to his girlfriend and getting back to watch the rest of the NBA All-Star Game with his family. If you’ve been following the news, you already know what happened. It was a rainy day. Trayvon was walking back to his father’s house with his newly purchased snacks. He was wearing a hooded sweatshirt. He was chatting with his girlfriend on his cell phone. And then George Zimmerman, neighborhood watchman, decided Trayvon looked suspicious. He followed him in his car and then on foot – directly going against the instruction of the 911 operator. There was a confrontation between them. Trayvon Martin was shot and died right there on the sidewalk, reportedly less than 100 feet from his father’s doorstep.

One month after Trayvon Martin’s death. There is a petition that has been signed by almost 2 million people – click here to sign. There have been protests in major cities. This Sunday, people around the country wore hoodies to church, to symbolize what Trayvon was wearing when he was killed.

George Zimmerman has not been arrested for the death of Trayvon Martin, because of Florida’s controversial “Stand Your Ground” law. Former Florida Governor Jeb Bush was the man who signed that law and even he says the law doesn’t cover this kind of murder.

When I spoke to my mom about my feelings recently, she said this all reminded her of Emmett Till. And she’s not the only one drawing those comparisons. 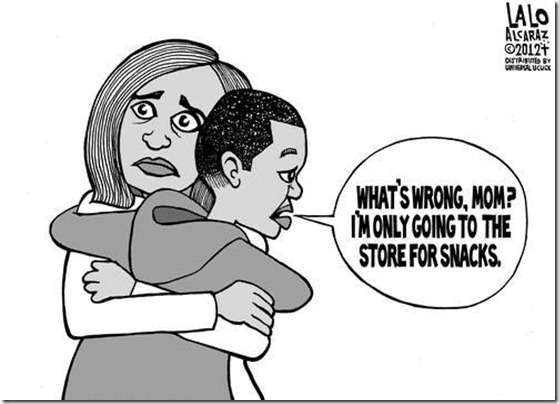 This is around the point where I honestly don’t even know what to say anymore.

Every time I sit and try to write about Trayvon Martin, the words get stuck inside me. I have started and stopped this blog post so many times over the last week. It’s been so hard to know what to say because this case makes me feel so hopeless and so sad, and so afraid for the future of this country. I hate the comments I’m seeing online. I’m hating the slant of some of the coverage I’ve been reading. I hate that people are finding ways to say that Trayvon’s sartorial choices made him a deserving victim. (Geraldo Rivera, your son is right to be ashamed of you. You continually use your platform to spew ignorance. And basically saying “If you’re offended, I’m sorry” does not a genuine apology make).

What can I say beyond what’s been said  already? Some of the finest minds in the blogosphere have written so eloquently about Trayvon Martin. If you really want food for thought, read the following:

Mychal Smith for The Nation – Justice for Trayvon Martin.

Danielle Belton of Black Snob – No Apologies: On The Killing of Trayvon Martin and Being “Good.”

Sinead O’Connor’s open letter to the family of Trayvon Martin.

Bassey Ikpi on xoJane – My Five Year Old Son is Afraid to Wear a Hoodie. In case you don’t already know, Bassey Ikpi is one of the best to ever do spoken word poetry, and she wrote an incredible poem for Trayvon. Here is video of her performing it.

Right now this whole thing feels like a brick sitting on my chest. As a beauty and hair blogger, I’m supposed to be testing out products and featuring information about things that uplift and beautify. I’ve got all kinds of interviews and reviews backed up that I need to be working on. But it feels disingenuous and difficult, and with every article I read about Trayvon Martin – especially now with the new villainous and politicized slant that some are using to disparage the character of an unarmed teenage boy – I find more and more anger bubbling inside me. And I know I’m not the only one who’s angry. And confused. And scared for the future of this country.

It’s all so heavy and ugly and upsetting. Not the kind of thing I like to write about on a blog that’s about beauty and positivity. So I will end this post with my hopes, regarding the outcome of this ongoing situation.

I hope that the murder of Trayvon Martin doesn’t lead to any additional violence.

I hope there is some form of justice and I hope it doesn’t take forever. The wheels of justice are already turning too slowly here.

I hope we can channel our collective anger and sadness and grief into good. Into community work. Into getting out the VOTE this year. I hope we can raise our voices and not our fists to express ourselves.

Trayvon Martin was not the first and he probably won’t be the last to be unfairly targeted and killed for the color of his skin. Ebony’s piece 10 Others Before Trayvon Martin underscores that awful truth. I just hope that Trayvon’s death will not be in vain, and I pray for some kind of peace for his family and closest friends.

I’d love to hear your views, bellas. It was so hard expressing my own.

« Beautiful Textures Review and Giveaway. Your Chance to Try My Faves!
Style Counsel – How To Pull Off Pleats »