I’ve been following the news obsessively since Mike Brown was shot in the streets in Ferguson, Missouri, but I haven’t managed to get any coherent words of my own out. I’ve started at least 3 different blog posts about this. Every time, there’s a new development, a new reason for disgust and outrage, another disappointing speech by a politician, another incident of egregious, excessive force by the police. The last time, I had maybe 600 words ready to go and when I logged back in to complete my post it was gone. It felt like a sign. I didn’t even feel sad about my post disappearing, because I was fumbling for clarity. That’s how I’ve been feeling lately. Like I’m fumbling for clarity and understanding of a story that simply does not add up, doesn’t compute, doesn’t feel right or sit well or pass the smell test. The fact that this is happening, in America, in 2014. It makes me feel speechless and powerless. 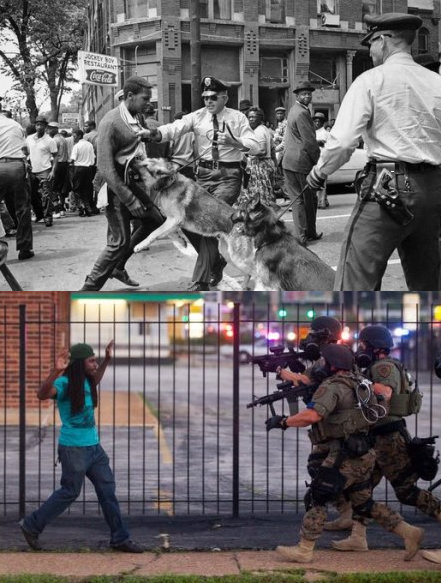 Every night since Saturday August 9th, when Officer Darren Wilson shot Michael Brown SIX times, leaving his body in the streets to grow cold over the course of four hours; it’s been mayhem in the streets of Ferguson. Police driving tanks in the streets, and using tear gas to disperse peaceful protesters. Policemen threatening and arresting protesters and even arresting reporters for just standing in one spot and doing their job – to show the world  what’s happening. Those wearing the uniform, who have been hired to serve and protect the people, sowing seeds of violence, mistrust and chaos. The echoes of the past are unmistakable and horrific.

To say the events of the past almost-two weeks has been evocative of the civil rights movement is an understatement. In a recent interview on CNN, a reporter even suggested the use of water cannons on the protesters. A counter-protest movement and a smear campaign against Mike Brown’s character is well underway, complete with talking points that completely ignore the most obvious facts. It becomes a slippery slope of respectability politics. It doesn’t matter what Mike Brown may have done before he was murdered in the street by Darren Wilson. What matters is, he did not deserve to die the way that he did, and the way information has been covered up by the Ferguson police is wrong. Using tactics of war on the streets of America on citizens gathered to protest, is WRONG. And this disturbing and horrific pattern plays out over and over again. Amadou Diallo. Sean Bell. Jordan Davis. Oscar Grant. Renisha Mc Bride. Eric Garner. Trayvon Martin’s mother just sent a heartbreaking letter to Mike Brown’s mother where she cuts to the essential truth: “Honor your son and his life, not the circumstances of his alleged transgressions. I have always said that Trayvon was not perfect. But no one will ever convince me that my son deserved to be stalked and murdered. No one can convince you that Michael deserved to be executed.”

Jamillah Lemieux of Ebony wrote a riveting account and breakdown of her experience in Ferguson, and the things we all need to know – click here to read Ferguson on Fire. One of her main points stuck in my throat. “What is happening in Ferguson can happen anywhere. With a Black person being killed under similar circumstances every 28 hours, it is a wonder that this explosion of rage isn’t seen more often.” She is so right. This could be anywhere, and as long as there is no justice for Mike Brown’s family and the Mike Browns of America, we will be condemned to repeat this sickening cycle. 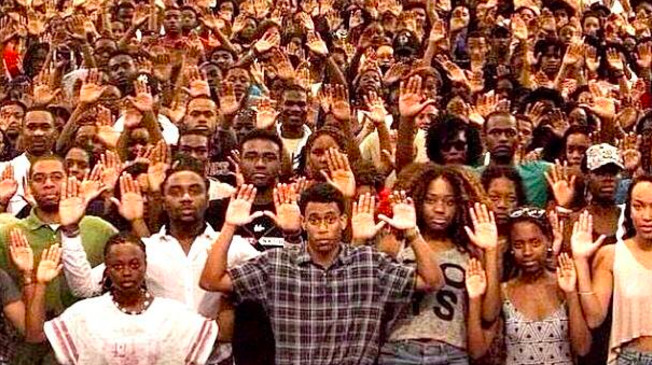 Tasha Burton, the creator of one of my favorite independent body care brands, Belle Butters, lives no less than 3/4 of a mile from where the shooting of Mike Brown happened. She’s on the ground, handing out supplies and providing protesters with food – click here to read more about the hands on fundraising efforts, and click here to support them in their efforts at Operation Help or Hush. Tasha explained what it feels like to live in Ferguson and endure this on a daily basis. “I live in this community and I was not raised to sit back and do nothing. So, if that means tweeting what I’m seeing and hearing or participating in a rally/march/forum, then I will. My business is important but it isn’t more important than making sure the police are here to properly serve the community and they haven’t been doing so. Not for a long time. Even me! I have been trailed by Ferguson police many times after coming home during a late hour. They follow me until I turn on my blinker to turn into my subdivision. They’re not making sure I get home safely. They’re running my plates, seeking a reason to pull me over. This happens to the majority of black men and women who live in St. Louis County, not just Ferguson. People are sick and tired of this happening over and over again. I have a younger brother who has experienced racial profiling. I have two growing nephews who will soon, very well may experience the same thing. I never in a million years thought something like this could happen in Ferguson, and yet, here we are… I’ve tried very hard to disconnect myself every once in a while from what is being tweeted or what’s on the news so that I may focus on continuing to market my business and so on, but it’s difficult. It’s difficult because it seems each hour, something gets said or something happens or I hear sirens or helicopters. So many distractions! I cried and asked God to make all of this stop and go away. It’s going to get even more intense in the coming weeks, I can feel it. We all can.”

What’s happened – and what is HAPPENING in Ferguson makes my heart hurt. The ache won’t go away. The anger won’t go away. We’re witnessing history in the making, and history repeating itself. What will be the lessons we learn this time? What scars will we bear?

It may hurt to look, but we can’t keep looking away. The whole world is watching.

« You Deserve – StriVectin-AR Day and Night Cream
#GetWellMeechy! An Update on Meechy Monroe and How We Can Help »