It’s hard to write light when your heart is heavy. And right now, my thoughts are wrapped up in darkness, in distress and in stomach churning worry for America – particularly the city of Baltimore. It’s yet another name to add to a list that’s too long, another city in turmoil, another case of police brutality that should provoke sadness and empathy but instead stirs up assumptions, retorts and defensiveness.  Watching the news these past few nights has been disturbing to say the least. I hate to see what’s happening in Baltimore and I hate how the media is covering what’s happening in Baltimore. 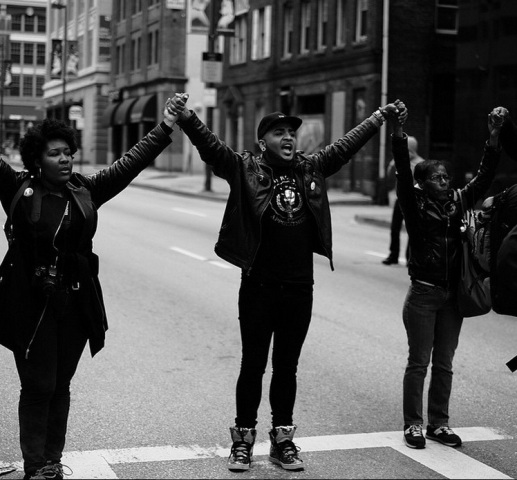 Image by Devin Allen via Fusion.com

Through it all, let’s remember why there is unrest and why there is protest. This is because Freddie Gray died after being arrested for no discernible reason. This is because a man’s spine was nearly severed and his voicebox was crushed. He asked for medical attention, didn’t get it and then died as a result of those spinal injuries. This is happening because Freddie Gray’s horrific death is part of an awful national pattern of behavior that needs to stop.

I’ve been thinking and praying and reading a lot about Baltimore. There have been some terrible reports filed and inaccurate stories written, and there has been some really thoughtful, intelligent coverage. I’m here to share the latter. These stories moved me and shed real light on the realities of what’s happening, why, and what it will take for change to come. Worth reading and worth sharing.

Nonviolence as Compliance by Ta-Nehisi Coates for The Atlantic: “When nonviolence is preached as an attempt to evade the repercussions of political brutality, it betrays itself. When nonviolence begins halfway through the war with the aggressor calling time out, it exposes itself as a ruse. When nonviolence is preached by the representatives of the state, while the state doles out heaps of violence to its citizens, it reveals itself to be a con. And none of this can mean that rioting or violence is “correct” or “wise,” any more than a forest fire can be “correct” or “wise.” Wisdom isn’t the point tonight. Disrespect is. In this case, disrespect for the hollow law and failed order that so regularly disrespects the rioters themselves.”

Why Baltimore is Burning by Kevin Powell via Huffington Post: “…every single time one of these scenarios occurs, we are handed the same movie script: Person of color is shot and killed by local police. Local police immediately try to explain what happened, while placing most of the blame, without full investigation, on the person shot. Police officer or officers who fired shots are placed on paid “administrative leave.” Media finds any and everything they can to denigrate the character of the dead person, to somehow justify why she or he is dead. Marches, protests, rallies, speeches. Local police show up in military-styled “riot gear.” Tensions escalate. Folks are arrested, people are agitated or provoked; all hell breaks loose. The attention has shifted from the police killing an innocent person to the violence of “thugs,” “gangstas,” “looters.” The community is told to be nonviolent and peaceful, but no one ever tells the police they should also be nonviolent and peaceful. Whites in power and “respectable Black voices” call for calm, but these are the same folks who never talk about the horrific conditions in America’s ghettoes that make any ‘hood a time bomb just waiting for a match to ignite the fury born of oppression, marginalization, containment, and invisibility. These are the same people who’ve been spent little to no time with the poor.”

Baltimore Been Burning by Jamilah Lemieux for Ebony: “When we see images of revolution and resistance across the world, we salute them. Some of the same Black folk who clutched at pearls at the sight of a burning Baltimore—as if Baltimore hasn’t been on fire, as if The Corner and The Wire were simply the product of some White liberal imagination—will gladly cheer the liberators of Egypt and lament the struggle of Palestine with the same breath they use to imply that the Maryland protestors are no better than the police because a few cops got hit with rocks and some police cars got the Jazmine Sullivan treatment.”

In Baltimore, We’re All Freddie Gray by D. Watkins for the New York Times: “At the moment, what’s going on in Baltimore seems to be all about Freddie Gray, the 25-year-old black man who was viciously attacked by police officers on April 12 more or less because he looked at them. They subdued him; his spine was nearly severed, his voice box was smashed and he was hauled off in a police van, even after he requested medical attention multiple times. He died a week later as result.

But it’s not only about Freddie Gray. Like him, I grew up in Baltimore, and I and everyone I know have similar stories, even if they happened to end a little differently. To us, the Baltimore Police Department is a group of terrorists, funded by our tax dollars, who beat on people in our community daily, almost never having to explain or pay for their actions. It’s gotten to the point that we don’t call cops unless we need a police report for an insurance claim.”

And via Mic.com, 10 Images of the Baltimore Riots You Won’t Be Seeing on TV. Images of real, ordinary life amidst the struggle.

Worth remembering that today is the 23rd anniversary of the Rodney King riots in Los Angeles. The déjà vu of history.

It feels like history is repeating itself again and again in an endless loop that’s destined to break. And we have to learn these lessons and make real changes soon, before this happens again. And again. And again. Because this could happen in Detroit. Or Miami. Or Chicago. It can happen anywhere, and it’s happening everywhere.

“… if we really want to solve the problem, if our society really wanted to solve the problem, we could. It’s just it would require everybody saying this is important, this is significant — and that we don’t just pay attention to these communities when a CVS burns, and we don’t just pay attention when a young man gets shot or has his spine snapped. We’re paying attention all the time because we consider those kids our kids, and we think they’re important. And they shouldn’t be living in poverty and violence.

That’s how I feel. I think there are a lot of good-meaning people around the country that feel that way. But that kind of political mobilization I think we haven’t seen in quite some time.” — President Barack Obama.

I can’t claim to know the solutions. I do know that my heart, my prayers, my strength and solidarity go out to the people of Baltimore and the family and friends who are missing Freddie Gray.

« Step Up Your Skincare Game With CurlBox BODY
What’s in my Beach Beauty Bag? Top Product Picks For Your Next Vacation »