Bellas, I’m still on a high from Rihanna’s concert in Chicago on Wednesday! Thanks to my friends at Roc Nation, I came back from the Bali Style Summit in NYC (more to come on that soon!) — got off the plane, showered and changed into my fiercest outfit, then headed over to see Rihanna, live in concert at the United Center! 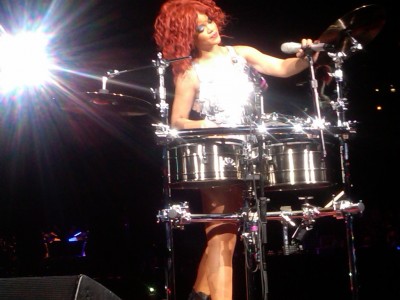 Rihanna, images via Luvvie of awesomelyluvvie.com

My husband is…shall we say…not so much into pop music in general. So right away I knew the perfect person to take with me. Luvvie! She was TOO excited to come too. Click here to read her review!

From the moment I got my tickets, I knew I was in for something special. Along with the tickets we were given pink wristbands for the riser section on the floor. Plush, luxurious, amazing seats for an amazing show! 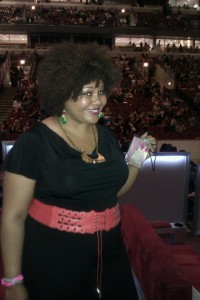 The audience was abuzz with excitement. The atmosphere in the United Center was electric. Ladies and gents came out dressed to impress (and yes, as Luvvie pointed out, the high heel struggle was TOO real. Ladies, you can start with a sassy flat or a cute kitten heel if you can’t walk in stilettos, don’t let anyone make you feel otherwise!)

Rihanna’s opening act, BOB, was bouncy and fun. I love his energy and positivity. The ladies were loving Nothing On You, and he set the crowd up with high expectations for Ms. Fenty. AND when he randomly wound up sitting right next to Luvvie during Rihanna’s set, he was cool enough to take a photo with her! (I was too shy to ask myself, and trying to take pix of Rihanna and…ah well). 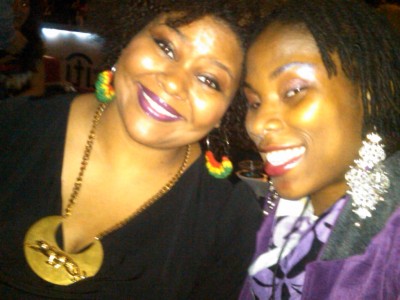 But hey, don’t Luvvie and I look cute? 😀

YES that is All of My Purple Life, on sale at MACCosmetics.com on June 21, y’all!! (shameless plug)!

If I had to rank myself from 1 to 10 on a scale of Rihanna fandom, before this concert I would have given myself a six. As a Caribbean woman I think of Rihanna as my island sistren, a chick I would have known and been friends with back home growing up. I don’t tend to listen to a lot of pop music myself, so I can’t claim an intimate knowledge of all of her songs. But Rihanna has earned her position as the artist with the most number one singles on Billboard. Even if you think you don’t know many Rihanna songs, you’d be surprised at how many of her melodies are already lingering in your brain and how many of her lyrics you already know. And will wind up singing at the top of your lungs during her concert.

I encourage anyone who has complaints about the quality of Rihanna’s voice during a live performance, to try to duplicate what she does. Rih Rih works the stage from one end to the other. She engages her fans by singing to them, kneeling before them, giving random high fives, and – as you’ll see — running into the audience and around the whole crowd to play drums!

Rihanna plays drums and then sings Run This Town in Chicago from Patrice Yursik on Vimeo.

HOW AMAZING IS THAT, right?? We were like 10 feet away and everyone was going NUTS. In addition to her own songs, Rihanna did a Prince cover and teased a bit of The Glamorous Life right before her own Sheila E. inspired moment. I loved seeing her do her thing, especially so up close and personal! 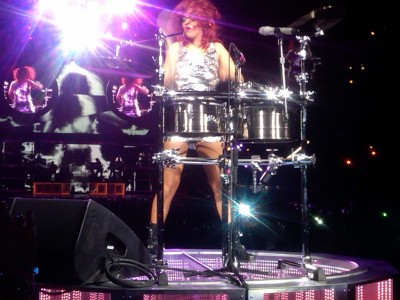 So what songs did Rihanna deliver at her epic concert in Chicago?

Pretty much in order it was:
* Only Girl in the World
* Disturbia
* Shut Up and Drive
* Man Down (MY JAM! Rumpapapum, rumpapapum, rumpapapum….)
* Cover of Prince’s “Darling Nikki”
* S & M
* Hard
* California King Bed
* Hate That I Love You
* What’s my Name?
* Rude Boy
* Please Don’t Stop the Music
* Take a Bow

My camera died. I’m so sorry!

I think Pon De Replay and maybe a few other songs were in Rihanna’s setlist as well. It was ALL HITS EVERYTHING. Nonstop action, nonstop fun, pyrotechnics and neon-clad dancers and sexy semi-strippers, and at the end fabulous confetti raining down on us all. Rihanna does minimal between-song banter, but the moments when Rihanna did speak to the crowd, she just seemed like a really sweet young woman who was genuinely thrilled at the love she was feeling from us all.

In Chicago outside after the show, the area by the Nivea bus became a raucous, spontaneous afterparty, complete with a dance off in a sweaty circle of scantily clad girls and boys. Walking down the street trying to find a taxi (which took FOREVER), random groups of teenage girls would burst into song as they walked or rode by in their cars. I know I’m not the only one in the Windy City who’s been humming Rihanna songs all week long. She definitely delivered the goods.

When Rihanna comes to your town, I’d definitely say GO if you’re looking for a highly enjoyable concert experience, the musical version of a summer blockbuster. I had an absolutely amazing time. And when you’re leaving, make sure to pass by the folks who are passing out free travel size cans of classic Nivea cream! I was SO GEEKED about that!

Thanks again to Roc Nation for taking care of me in such spectacular fashion.

Do you plan to see Rihanna on her Loud Tour? Click here to see if she’s coming to a city near you (and she probably is, homegirl is going EVERYWHERE this year!)

« All About The Butters
Afrobella on Michael Baisden! »