Last week Thursday, I had the honor of being interviewed in a brief segment on The Michael Baisden Show. And bellas, I don’t think it could have gone ANY better! 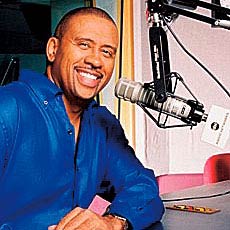 The original topic was all about why women cut their hair after a relationship. But soon it turned into a let’s-learn-more-about-your-awesome-blog and I loved listening to Mr. Baisden discover Afrobella.com!

My amazing new video intern, Britney Empty, transformed the audio into a cool video clip. Check it out!

My awesome friend Erika of Black Girl’s Guide to Weight Loss also appeared on the show, click here to listen in on her interview!

Thanks to the producers of The Michael Baisden Show for reaching out and for being so amazingly accommodating with me! My interview was literally recorded in the backseat of a towncar in New York – I just arrived for the Bali Style Summit. I was en route from La Guardia Airport, almost at the hotel in the middle of Times Square. The very cool driver pulled over so I could be focused and ready for Michael Baisden’s questions! How did I do, bellas?

« Rihanna’s Concert Hits Chicago!
All Of My Purple Life and the MAC Bloggers Obsession Collection, On Sale TODAY! »