When it comes to comedy, I tend to steer left of center. I tend to love comedy that’s subversive, quirky, sometimes cringeworthy. I can’t miss Curb Your Enthusiasm, Parks and Recreation, or Community. I think Wyatt Cenac, Donald Glover, and Hannibal Burress are brilliant. Anthony Jeselnik makes me laugh till I cry. I’m a big fan of Louis CK and Idiocracy and Pootie Tang are among my favorite movies. In the kind of comedy I love, women of color are rarely featured. But we can be subversive and quirky and cringeworthy too!

And that’s where Awkward Black Girl comes in. 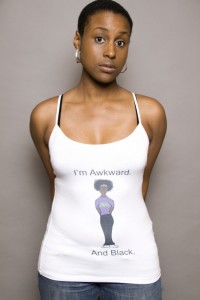 Created by the beautiful and talented Issa Rae, The Misadventures of Awkward Black Girl is a web series like none other. It’s like…if Daria was a woman of color who worked in an office. But funnier. Don’t believe me? Watch. (Episode 3, The Hallway, is HILARIOUS. And The Dance is one of my favorite episodes). Everything Awkward Black Girl has done so far, has been funny and edgy and fresh and DIFFERENT. I love it!

In the last year or so, Awkward Black Girl and its creator Issa Rae, have been the focus of much media love and attention. Check out her interviews on Essence, The Root, and Clutch Magazine.

But Awkward Black Girl might be dealing with a problem I can definitely identify with. It’s what my father refers to as “all of the prestige, none of the paycheck.”

In an effort to continue filming the season of shows — which has been extended by popular demand — Awkward Black Girl has set up a Kickstarter to seek donations from fans and would-be investors.

I think what Issa Rae’s doing is awesome, and I really want to see Awkward Black Girl take things to the next level. If you can identify with her character or just love what you’re seeing, click here to donate! And click here to enter her Show Us Your Awkward contest!

Keep doing big things, Issa Rae – awkward black girls around the world are rooting for you!