If you follow me on Facebook, Twitter or Instagram, you got to experience the Target Inner Circle excitement with me live as I did! But if you’re not into the whole social media thing, let me tell you all of the awesomeness I experienced last Tuesday. It was the first official meeting of the Target Inner Circle. We are a very small, handpicked, diverse group of bloggers and social influencers who are into food, children’s stuff, lifestyle blogging and style. It was great to finally meet everyone else! 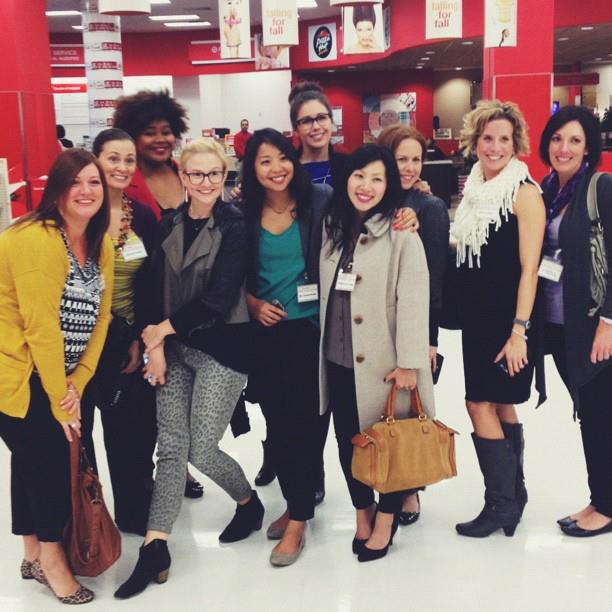 The morning began with breakfast and meeting some Target executives. Then it was on to the store tour — we visited the Harlem store which is located in a GINORMOUS building with lots of big stores in it as well. Seriously that place is like one stop shopping. And the Target is laid out to perfection — we got the rundown from the manager, which helped to put Target’s business plans in perspective a bit. Stores really cater according to researched neighborhood demographics. So the Harlem store was perfect for me — a woman with natural hair who’s interested in diverse cultural offerings and plus sized fashion. 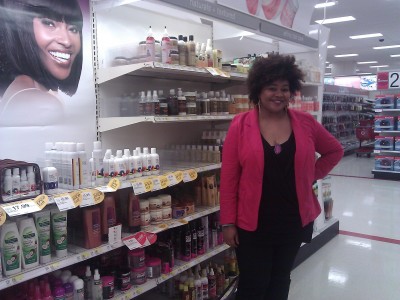 Their natural hair selection was IMPRESSIVE! Later we got a chance to do a little shopping and I picked out this black and leopard Merona tote bag. BTW someone later on asked me “is your bag Celine?” and I wanted to FALL OUT. You can make that error all DAY, ma’am.

After the store tour we were whisked off to Target’s Media Day, which was impressive to say the least. For me as a former print writer it was a trip to be in the same room as every major media outlet from Reuters to Forbes to the WSJ — but as a specially invited guest of Target’s. It was such a surreal experience and even as I chatted with Target’s President of Communications Laysha Ward and Essence Magazine’s Editor in Chief (and one of my personal heroines) Constance White, I felt the need to pinch myself to make sure this was all really happening. 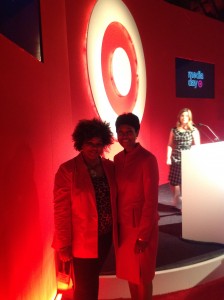 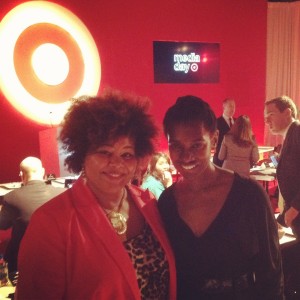 We learned all about Target’s plans and philosophies — they’re doing some amazing work with QR codes in key areas of the stores, and there are more City Targets in store for cities like San Francisco and Portland, as well as Target Canada. And after that it was time for the BIG NEWS. We were among the first few to behold the unveiling of the Holiday collaboration with Neiman Marcus! It is AMAZING. Check out my favorite items! 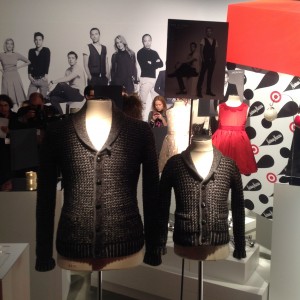 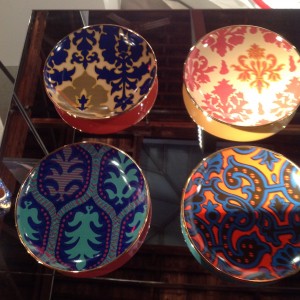 the Tracy Reese dessert plates are a MUST have 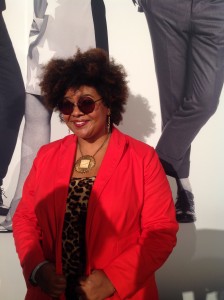 had to try on the Brian Atwood sunglasses!

The collection is vast and gorgeous, including 50 gifts from 25 top designers. There are many items I’m totally lusting after, but I did also feel that the clothing items could also have been made in plus sizes. I would LOVE to have the option to rock that sequined Tracy Reese top or that gorgeous floral Lela Rose frock. But alas, sizes stop at an XL – although I was assured the Prabal Gurung cape would fit anyone. Despite that disappointment I must say it was incredibly awesome to be in the room to be able to actually express that sentiment to Target and Neiman execs, and be respectfully listened to. I’m really, really hoping to see Target step their plus size game up a notch or two. The current Labworks collection is totally a step in the right direction, wouldn’t you agree?

After Media Day, it was time to CELEBRATE at the Target 50th anniversary party, and believe me when I tell you ain’t no party like a TARGET party. It was absolutely amazing. There were delicious signature cocktails, decor to die for — I met the guy who put the production all together, Louis Asaro of Eleventh Street Workshop, such a NYC rock idol kind of dude, so down to earth and cool to chat with. Even he was standing in awe of the party that surrounded us, that his company helped to create.

The guest list was star studded. Everywhere you looked, there was a face you knew WELL. Tory Burch. Nate Berkus. Shaun White. Soleil Moon Frye. That looks like Emilio Estefan. Oh yeah, that totally is Perez Hilton. And isn’t that the daughter on Revenge? At one point I was standing there and an elderly gentleman was being led by, so I moved out of the way…and it was TONY BENNETT. And then a troupe took the stage and sang a modified version Be Our Guest and then Alicia Keys came out and sang Happy Birthday to Target. Like I said. Surreal. 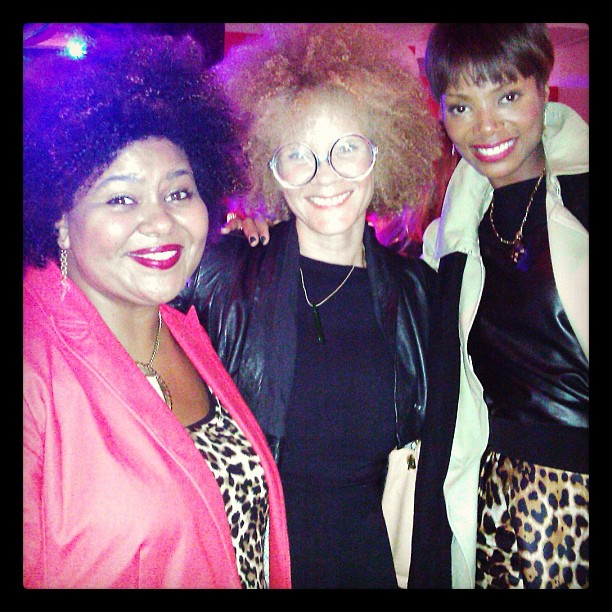 Here I am with Tai Beauchamp and Michaela Angela Davis. And with of BET’s Debra Lee! She recently went natural so we had to discuss hair! 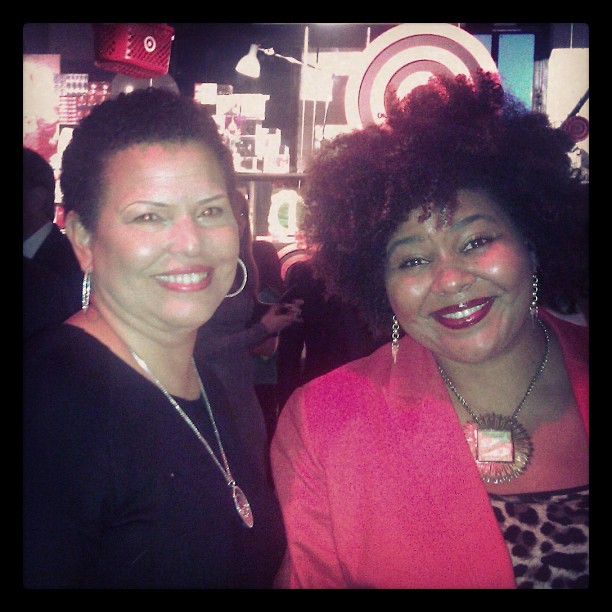 We had a BALL but we were tired by the end of a full, fun day. Thanks TeachMama for the awesome pic! It was an absolute honor to experience all of this and to be part of Target’s Inner Circle. I’ll be attending quite a few more amazing events and telling you all about the insider awesomeness. In fact, I’ll be in NYC again this week! Stay tuned to my Instagram, Twitter and Facebook for live details as they happen, and expect a blog post all about it in a week or so.

Thanks again to Target. For EVERTHING! What an amazing whirlwind!

pets says:
You are in the Inner Circle of quite a few top places - you so deserve all of this as you have worked hard since Miami to put your work, name and blog out there. Congrats! As to larger sizes - if I were a designer I would link with Afrobella to do some designs.

Lady A-The FystyMama says:
What an AWESOME Opportunity! You really do deserve it! Keep up the good work!

Jennifer Pebbles says:
Patrice, I loved meeting you and chatting with you! As a "sister-of-size," I couldn't agree more with your feelings about expanding clothing markets to meet the needs of the vast majority of women in the US. I love that you had the confidence to give that need a voice, and I wish I could be more like you! xoxo

Doctor Cris says:
Target is one of my favorite stores because everything I need is in one store. I find myself now even buying some of my groceries there too. I love how Target always keeps the store clean and organized and bringing in new Designers for home and clothing. I'm so happy to hear that you brought up the issue about not having Plus Sizes in the new Designer wear. All women deserve to have access to all that makes their bodies reflect the beauty within.

Adetta says:
That was a great review of the event. I'm glad you spoke to them about their plus sizes. Where I live in NC, the Target has a terrible selection of plus size clothes and frankly XL does not work with a full bust, so good on you for getting that information to the right people. I hope they take note.

The Curly Oenophile says:
Aww man, I'd been anticapting the Neiman Marcus holiday collection at Target ever since you published this post. Finally, it's here and I'm disappointed with the selection of things. >_< Fortunately, there's always something in Target I want or need so there's no such thing as a wasted trip.