I’m not usually one for reality show singing competitions, but two main factors can suck me into any kind of television programming. #1 – show me a competitor with true, raw, undeniable talent and #2 – let me know that someone on the show is from the Caribbean and is proud to represent our corner of the world. So from the minute I heard Jamaica’s own Tessanne Chin was going to be a contestant on NBC’s The Voice, I knew I had to tune in. 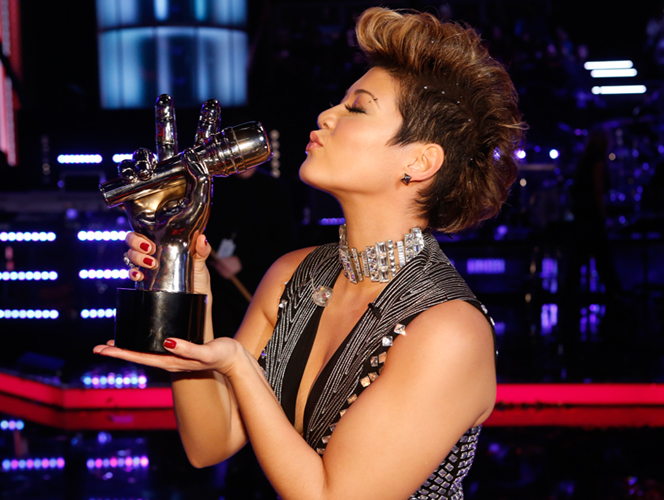 From the very beginning, Tessanne was a front runner. Island people knew exactly why – Tessanne and her sister Tami have been singing superstars in the Caribbean for many years now, and performance is in their blood. It’s one thing to have success in the islands. It’s entirely another to step onto the world stage and have everyone recognize your talent as an international superstar. That’s exactly what Tessanne did all season long on The Voice. Time and time again she showed the world the majesty and range of her talent. Always with a humble spirit and a charming smile, always showcasing her culture and heritage.

From the very beginning, Adam called it and said “you could easily win The Voice this year.” And with each episode she made her case, inspiring Caribbean people all over the world to watch, rally together and encourage everyone who could vote to support Team Tessanne!

Her performance of Underneath It All was probably my favorite of the whole season. Tessanne took that song and brought out the true Jamaican flavor, performing both the Gwen Stefani and Lady Saw parts with effortless ease. She also did a beautiful job on her cover of Bob Marley’s Redemption Song, which is the kind of song that people feel so attached to that cover versions don’t normally cut it. But Tessanne did that!

Tessanne showed that she could even deliver when it came to covering a song by one of the world’s greatest singers of all time, when she delivered Whitney Houston’s I Have Nothing.

It is SO hard to sing a Whitney Houston song, and Tessanne stepped up to that formidable task with grit and grace.

Even when it came to sharing the stage with superstars, she rose to the occasion and more than held her own. Her reggae remix verse of Let It Be brought that song a fresh perspective that was so refreshing.

On last night’s episode, Tess shared the stage with one of her musical idols, one of the Caribbean’s most beloved singers. One of the best living singers in the world! Celine Dion, who still looks and sounds incredible. They duetted on one of Celine’s 90’s hits, Love Can Move Mountains. So awesome to see the joy in that moment, absolutely a dream come true for Tessanne!

As my husband kept telling me last night, the finale of The Voice really just boils down to the last 5 minutes of the show. I just KNEW Tess was going to win. And SHE DID!

YAYYYYYYYYY! My whole Twitter and Facebook timeline blew up last night, so much island pride! Our girl DID IT! So much happiness on social media. And even MORE in Jamaica, where people gathered at Halfway Tree to celebrate Tessanne’s victory! Look!

Flip forward to about 1:09 in that video to see Jamaica go crazy!

YESSSSSSSSSS! Our girl DID THAT. Jamaica to the world! Caribbean people stay doing it big and on our own terms. Tessanne represents us with such grace, humility, and God given talent. We can’t help but feel proud, like we know her from small. She is US.

Congratulations to Tessanne and to Team Tessanne, WE DID IT! Who run tings? WE RUN TINGS!

Thank you for the amazing Christmas present, Tessanne – you made all of the Caribbean proud!

For more on Tessanne’s success and how she makes us feel, read Colin Channer’s piece for the WSJ, and GCaribbean’s piece Tessanne Wins (and IS) The Voice!

« What Beyoncé’s New Album Release Taught Me
How Do You Pay It Forward During The Holidays? »