MAC x Aaliyah – All The Details Behind the Collection

I still remember exactly where I was when I heard the news, that awful day that the world lost Aaliyah. I was in college in Miami. Aaliyah was born in 1979, like I was. Her music was undeniably part of the soundtrack of my upbringing. Seeing the dates of her life flash across the news felt so jarring and tragic — 1979 to 2001. Aaliyah left us at age 22, but in her brief life she made such an impact on the world. Her look, her sound, her style, her demeanor – she captured the hearts of her fans and influenced a generation.

So often I see another singer or actress doing something major and it will flit across my mind – Aaliyah could have done that perfectly. Or I’ll wonder if she were alive, what she would be doing now. Aaliyah rose to fame in a time when the doors hadn’t been kicked in just yet, before major corporations started developing the visions of multitalented celebrities with unique style. If Aaliyah was alive today, can you imagine the fashion lines, the makeup collections, the acting roles and of course the music she would have continued to bless us with? So many of us fans have imagined, wondered, yearned and finally – via a petition – actualized a tribute to baby girl, in collaboration with a brand she loved. 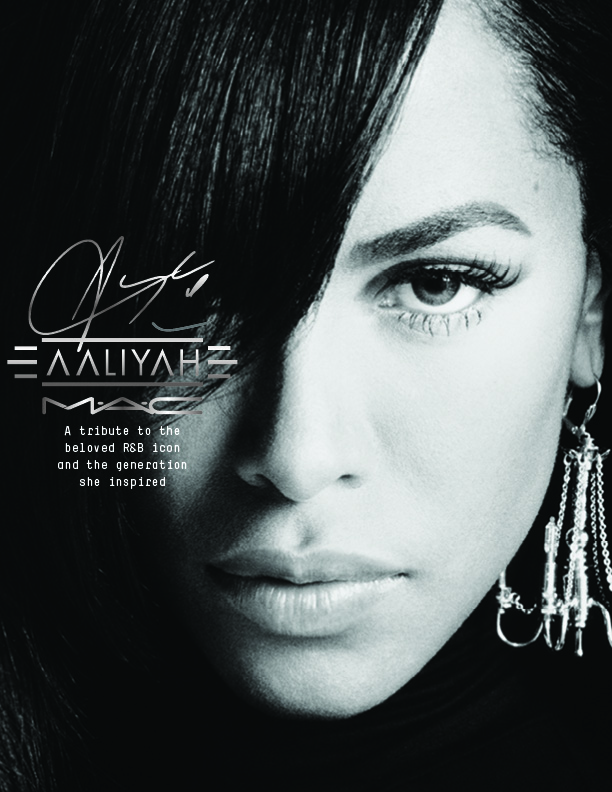 MAC Cosmetics released their official MAC X Aaliyah collection on June 21. When I got the collection, I honestly gasped – the packaging was so unique and I loved the lipstick colors. So far the response online has been fascinating. I know so many who rushed to purchase More Than a Woman lipstick and One in a Million lipglass because of their love for Aaliyah’s music. However despite the proudly announced sales, I’ve also seen online criticism from disappointed fans who yearned for more from this collection for a variety of reasons.

I wanted to learn more about the origin of the collection and the decisions behind it. So thanks to MAC for sharing their official Q&A with Rashad Houghton, which breaks down everything I wanted to know as a fan.

Read on to learn more about MAC x Aaliyah! 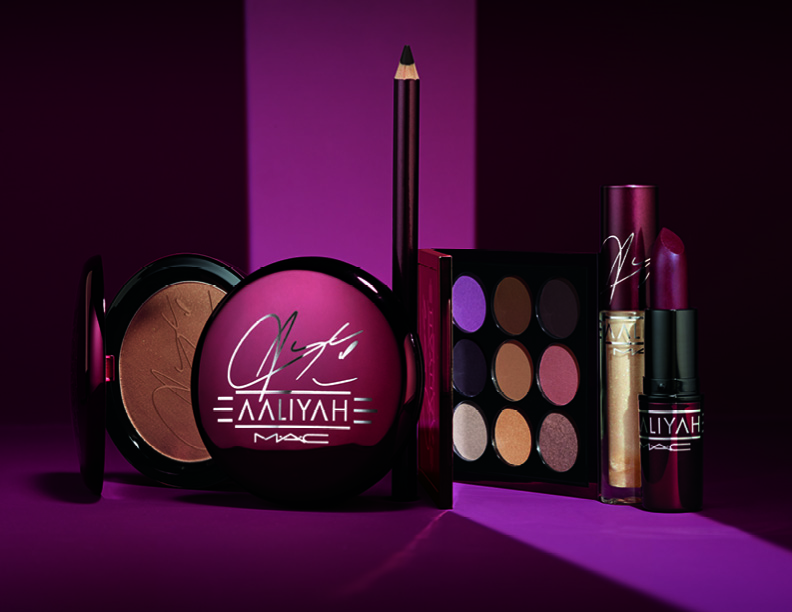 MAC Cosmetics Q1. How did this collaboration with M·A·C come about?

Rashad Houghton — I’ve been on social media for a while now, specifically Twitter, to stay in touch with her fans. My mother calls her fans “the special ones” because of their unyielding love and continuous support of my sister to keep her legacy alive. It’s really a testament to who my sister was and how she connected so strongly with her fans.

They started a petition and were so kind that they asked me first if I would be on board with a collaboration. They knew how much my sister loved M·A·C for the quality of their products and the endless colour options. M·A·C was always a huge supporter for us and her fans respected that. About 30-40,000 signatures later and we linked up with M·A·C.

As soon as we were able to find the perfect time frame, everything for this collection worked out so seamlessly. My family and I worked closely with M·A·C on every part of the process. Each member of the M·A·C team was so wonderful, creative, and brilliant and most importantly sensitive to what this collection really represents.

MAC Cosmetics Q2. Why did you decide to move forward with this collection with M·A·C in your sister’s name?

Rashad Houghton — My sister always wanted to include everyone – she was a leader in that way. Everyone is going to be involved in some form or fashion with this campaign.

M·A·C obviously is an incredible brand whose foundation is built on inclusivity. They represent all shades and colours of people, doing so in a strong way to bring all people together. My sister, her career as an artist, as an actress, her style; she was able to reach out to all corners of the earth. Her ability to effortlessly cross boundaries is what M·A·C does with their products and that’s what it’s all about.

It didn’t take more than a second to contemplate moving forward with this collection. M·A·C was her every day makeup choice and I knew she would be elated for M·A·C to launch a line with her name on the package. There is no brand that could compare. 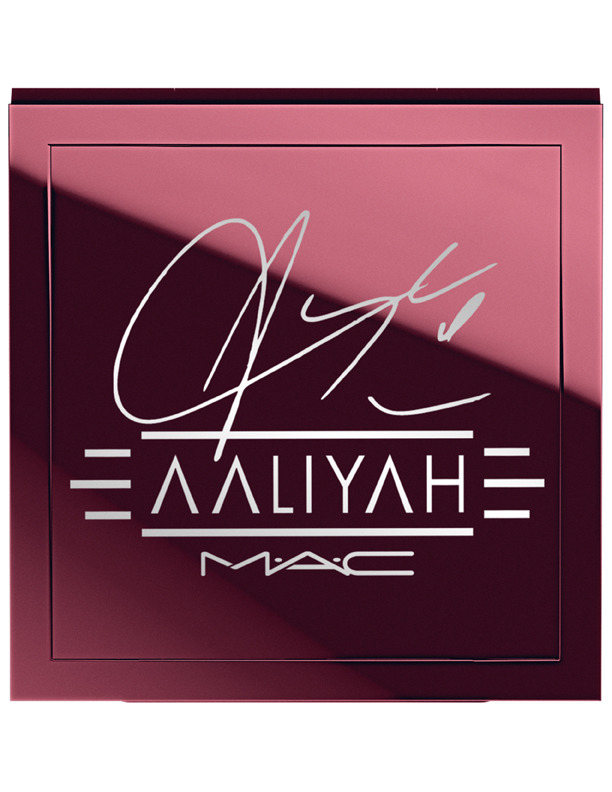 MAC Cosmetics Q3. In creating the products for this collection, what were the two main things you kept in mind when choosing shades and products?

Rashad Houghton — The entire line is absolutely incredible. We took a lot of time to pick out specific products and shades that were diverse so her long-term fans and new fans had the ability to create Aaliyah’s archive looks. As it came together, this was something that was super exciting for my family. We also enjoyed naming the products.

There were so many things to take into account and we know there will be fans who will buy the product for the product payoff and then fans that buy the product because the name brings them back to that song or that music video. This nostalgia is something that M·A·C has done such a great job in delivering.

I would say the main thing we kept in mind was my sister’s ability to be a chameleon – she was an actress and a performer. We wanted to develop a line that really encompassed all of these looks of hers. It’s so rewarding that we were able to create a wide range that people could mix and match to get those Aaliyah looks, to build looks that are present, and to take makeup and trend into the future.

MAC Cosmetics Q4. What does this collection mean to you and your family?

Rashad Houghton — This collaboration is something that represents the past, something that adapts to the future and beyond. The product names, colours, textures, all of these things were carefully considered. We made sure that every detail in the whole line made sense.

This collection means so much. It’s truly carrying on her legacy in the most beautiful and personal way. We know that makeup and M·A·C is something that she really loved and gave her such confidence. Anyone who has ever met her, had a chance to see her, could attest to this. It was a way for us to keep her alive and give back to her fans.

MAC Cosmetics Q5. This collection also pays homage to Aaliyah’s loving fans. Which products do you think her fans would have loved the most?

Rashad Houghton — We are so excited about this line. Our goal was to bring everyone together and bring everything back into focus. We are just eternally grateful to the fans and to M·A·C for making this happen.

Obviously, through social media, it is clear that we are always finding these different moments to capture and to celebrate. My sister did that so well and this is a way to commemorate my sister through all her past moments. 100% of the time, she was wearing M·A·C in all the big events throughout her life.

When the world sees every single product, even if they don’t know a song, we hope that they go back and find it, or watch those videos. We have a lot of surprises that go along with this campaign. M·A·C has really created a spring board to reintroduce my sister’s art and legacy in the most endearing way. This generation really does love 90’s music. This is giving them more of what they already want; giving them more of yesterday and tomorrow.

MAC Cosmetics Q6. Do you remember any of Aaliyah’s favourite M·A·C products?

Rashad Houghton — My sister always had her bold red M·A·C lipstick with her! She had a few favourites. She was always reapplying her lipstick and her lip gloss. When we met with the M·A·C team we were able to share with them the shades that my sister used because my mother kept everything.

M·A·C was able to reinvent those products that they launched so many years ago, take the looks that we saw in her music videos and her films, and we were able to translate. From the bold lips, to the smoky eyes, to her highlighting, it was a unique synthesis. This collection allows for those natural and clean looks, and the braver looks that my sister, Aaliyah, wore so well. It was such an adventure to recall all of those old looks and make them new and fresh for 2018 and 2019.

MAC Cosmetics Q7. Your sister paved the way for so many aspiring artists to follow in her footsteps. What do you think this collection will represent to them?

Rashad Houghton — She was a style icon, music icon, and fashion icon. I know that she paved the way for so many to follow, but she had so many influencers who made her such an idol. She loved the smooth vocal stylings of Marvin Gaye, but then she was inspired by the Clark Sisters and Janet Jackson.

She took a lot of style notes from Naomi Campbell and she was able to really own that tomboy style. Her style was street and sweet and completely ground-breaking and unique. She kind of would set her style by borrowing my clothes, my jackets.

She always had this ability to mix high fashion and hip hop. I think her signature style today would be a halter top and baggy jeans. I think new artists that emulate my sister’s style, and her influences who we considered family, like Timbaland and Missy Elliot, will feel touched by this collection. I don’t think many people were able to shine both inside and outside more than my sister, Aaliyah.

Thank you for sharing, MAC. I loved learning his perspective! You can click here to shop MAC X Aaliyah collection.

This post includes affiliate links, so if you click to shop you will be supporting Afrobella.com. Thank you!

Rhea Skincare says:
I really enjoyed this post. I have bookmarked your blog and I will definitely be back for more tips! http://www.rheaskincare.ca

monika satyawali says:
I love the post !!! I follow your post and I must say you always come up with new things and your writing skills are pretty amazing. I am gonna share this article with my friends and I am sure they are gonna love it. The way I do. ONLINE BEAUTY SHOP

lucy says:
thanks you for sharing