In Chicago I am quite the homebody. You’re unlikely to catch me clubbing – at most I’ll go with my husband to a concert, or out to dinner. I don’t get out often when I’m in my city, but when I’m out of town? It’s non stop activity. This last trip to Los Angeles was a whirlwind of social activity and I loved it all! On the Saturday night before the Oscars, Luvvie and I went to Uptown Magazine’s 20th Anniversary of Boomerang Celebration, held out in Culver City.

Boomerang is one of my favorite movies of all time, for multiple reasons. It’s one of Eddie Murphy’s best. The soundtrack is killer. Halle Berry and Robin Givens are drop dead gorgeous in it. and the film brought together Caribbean icons Grace Jones and Geoffrey Holder in unforgettable roles. I can’t count how many times I’ve seen it! At the Uptown party, Boomerang played on repeat on screens throughout the venue. DJ D-Nice was on the ones and twos. And the party was quite the celebrity-studded affair! So both Luvvie and I had to turn it OUT. 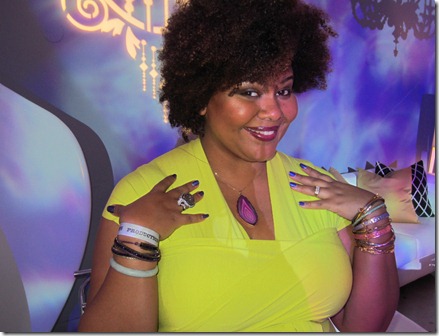 I wore my Marilyn convertible dress, which was a gift from acclaimed and awesome plus size designer Monif C. I came REALLY close to choosing the dress in teal, which felt like a safe choice….but Brandon – Monif’s right hand man – convinced me to go citron. Yellow makes me SO happy! 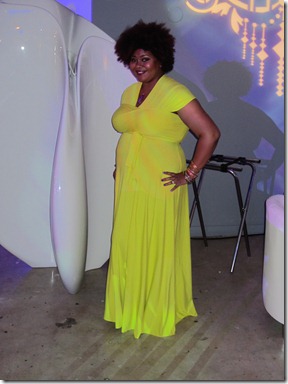 I LOVE it! I’m still struggling to figure out what shoes I need to buy to go with it. But I LOVE it.

I set off my Monif C. dress with jewelry from Max and Chloe – that Privileged purple agate slice is quite the conversation starter! 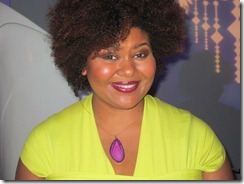 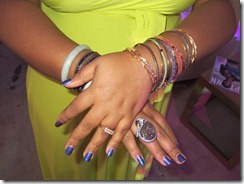 I went for a festive arm party kind of thing to set off my uber bright dress – the bracelets are also Max and Chloe but I can’t remember which designer…and this is is the Andara Druzy Paisley Cocktail Ring. I wore sequined flats by Just Fab.

Luvvie wore an ADORABLE red retro frock by Tracy Reese, via Layla Grace. (not quite this, but close!)  It was SO perfect on her, and she paired it with Rachel Roy wedges and a clutch by up and coming Chicago-based handbag designer Moto. Click here to check out Moto on Facebook! 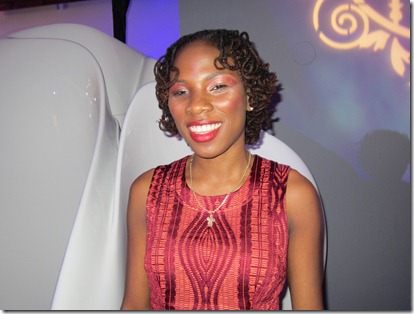 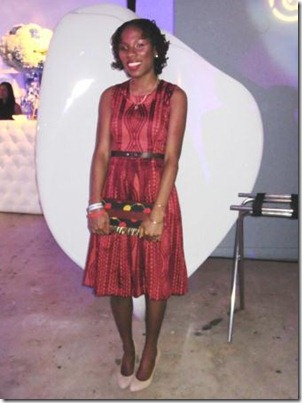 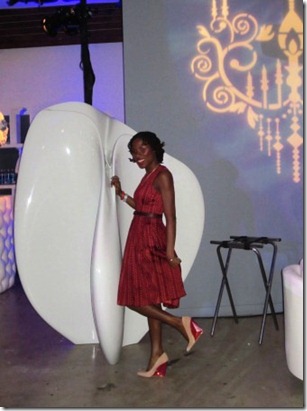 And our dream team came together to make us look gorgeous for the occasion! Nicole Evans gave us the perfect makeup for the occasion, Felicia Leatherwood set Luvvie’s hair off RIGHT, and Krystle Rowry was on hand to film it all! And the beautiful song you hear is yet another original track by Kirby Lauryen, check her out on Twitter!

Check out our party glam look, in this video sponsored by Avon!

For my look, Nicole used the Avon True Color Eyeshadow Quad in Blushing Raisins, Avon Glimmersticks liqui-Glide liner in Brown and AVON Superextend Extreme Mascara in black, and she used the Jillian Dempsey for AVON Professional Perfect Eyes kit in Cinnamon Toast on Luvvie to accent the tones in her dress!

The whole Uptown party was lit in sultry shades of purple, so it gave our dresses an extra cool glow. All throughout the crowd, there were all kinds of famous folks. Here are the friendliest and coolest of those celebs! 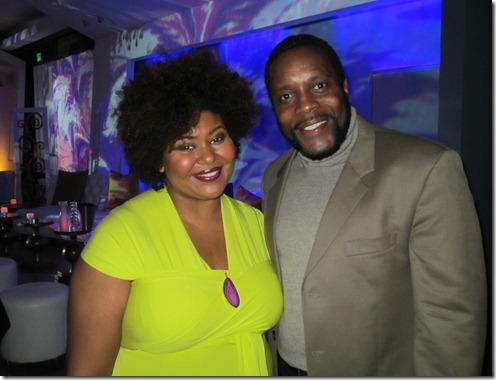 If I had to write a list of the top five best television shows of all time, The Wire would be in my top five (alongside Breaking Bad, The Sopranos, and The Shield). There was something about The Wire that did more than shock or leave you on the edge of your seat, breathless with anticipation. The Wire lingered with you. The characters were so true to life that long after the show’s end, you still think about them and wonder what their lives would have gone on to become. At the Uptown party when Chad Coleman, who played Dennis “Cutty”  Wise walked by, Luvvie was like “PATRICE, it’s CUTTY!!!” Even though Chad Coleman has moved on to play other roles – now he’ s one of the stars on I Hate My Teenage Daughter – he’ll always be Cutty in the hearts of many. And he was SO nice to talk with in person. Thanks for being cool, Chad! 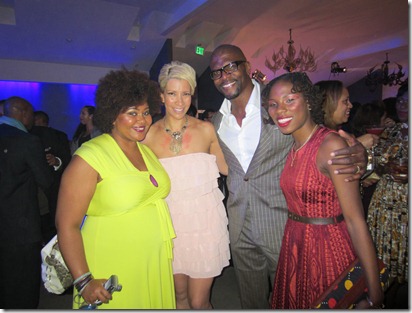 From the moment I spotted Terry Crews in the crowd, I started grinning. I wanted to meet him, just so I could tell him how much I love his work. ESPECIALLY because Terry Crews played one of my favorite characters in one of my favorite movies – President Dwayne Elizondo Mountain Dew Herbert Camacho, in Idiocracy! I think he got a kick out of the fact that I brought up that obscure 2006 cult classic, and Terry admitted that he’d love Mike Judge to start working on a sequel – The Rise of President Camacho. I WOULD LOVE THAT! Mr. Judge, if you’re reading – Idiocracy was SO primed for a sequel. I know I’m not the only one who would love it!

Terry Crews and his wife are absolutely lovely, by the way!

At the end of the evening we had TWO amazing encounters. 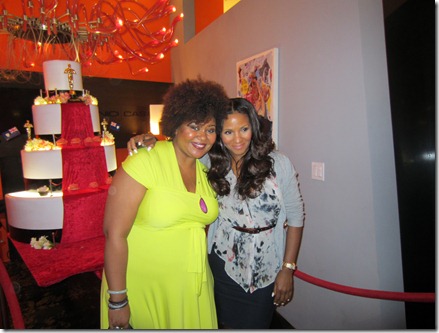 First I got to meet PR superstar Marvet Britto, and I was absolutely blown away that she recognized me and knew my blog. Marvet is major, and following her on Twitter gives me inspiration every day. It was so great to meet her!

When Stephanie took us over to meet Tisha Campbell, I was already excited. I mean…it’s TISHA CAMPBELL. I grew up watching her from the days of Rags to Riches. I wished I could dance like her in House Party. And then she went on to be Gina on Martin and Janet on My Wife and Kids. I have ALWAYS loved Tisha Campbell. So imagine what it’s like to meet  her, and to have her say “oh hey, you’re Afrobella! I remember doing a Skype interview a while back. I could never forget that beautiful face.” 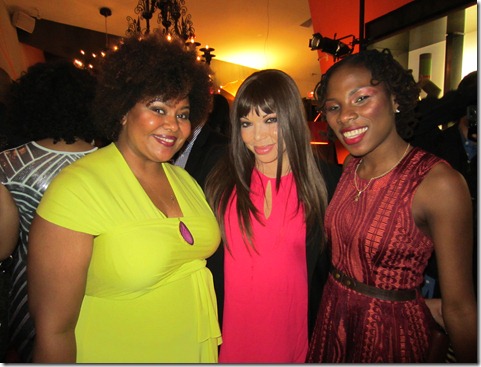 I was ready to FALL OUT, y’all. I kept it cool, but I was positively aglow on the inside. And then Tisha looks at Luvvie and said she looked familiar and she’s read her blog before! She made our NIGHT. And by the way, Tisha is on Twitter (but doesn’t tweet often) – follow her @TishaCampblMrtn.

Another fabulous Los Angeles experience. And I still have a recap or two to go! Thanks to Uptown Magazine for a great evening!

Click here to check out Luvvie’s recap of what we wore!

pets says:
Yellow! Just love that colour and the jewels! Great post - you can tell that both of you had fun.

Steph says:
I love your dress Patrice! The color is stunning. I gotta get the teal one. Luvvie looks very grown in hers too. Those shoes are a must have. Y'all gonna make this (slightly) older woman kick black to the curb and return to colorful clothing. Already decided to change my hair because of you! Thanks!

Berty Morales says:
What a fabulous event and you look beautiful. Love your dress :)

bella says:
you deserve to SHINE in bright colors!! I can see you in red, or purple. Can't wait to hear about your new hair adventures!!!

bella says:
thank you so much!! It's a bold color but I felt beautiful in it!

bella says:
we had a great time. Thank you!

Babe Hope says:
Gorgeous! All the pix are sophisticated and beautiful. And yes, yellow is your color!

Khadine says:
You looked amazing! That neon yellow goes so well with your complexion! And that dash of purple was perfect! :)

Cheekie says:
Wow, that color! SO glad you chose the citron (which, was trying to think of that color because I have a dress in the same color!) because it POPS with your lovely skin. And so cool it's a convertible dress. I want one of those so bad! And the nails! Pow! You look gorgeous, Bella!

MsXpat says:
You look amazing that yellow is fab on your complexion :0)

ayathemassagediva says:
Yessss For Citron! One of my favorite colors, it just makes people smile. And yes, Chad Coleman is just so very nice. We have the honor of hosting him back here in his home town (Richmond, VA.) next weekend. He's the spokesperson for our father-daughter dance, https://www.facebook.com/events/353046081376472/

curvyinthecity says:
I am glad to see you choose the yellow---its one of those shades that I am often afraid of but you rocked it @afrobella (happy bday by the way)

MELISASource says:
You look beautiful!! So glad you had such a wonderful time!

Arlene Gibbs says:
You look stunning, Bella! I agree with the other comments, that shade of yellow is gorgeous. As I watch the GOP primary it just reinforces my belief that Idiocrary is a documentary.

CultureShockArt says:
This dress is an absolute homerun! Luvvie's shoes were equally fab!

Dad and Mom says:
You wrote this blog on a special day so I must also tell you how very special you look. We are all very proud and happy for you. Dad

Crack Battlefild Hardline says:
won't be drivable in Battlefront. He said there were many factors that made up this decision, though he wasn't personally involved in making the call.