Last night’s Oscar broadcast was more or less what I expected. Standard issue sophomoric humor and frat boy irreverence set to music and soft shoe dance routines by Seth McFarlane, check. An excessively long broadcast that felt every second of three hours long, check. Glorious gowns and fantastic performances by a few of my favorite musical artists, CHECK. Look out for a positive review of the enjoyable, glamorous aspects of the Oscars later. Right now I need to address the undeserved issues surrounding one special person in attendance last night. 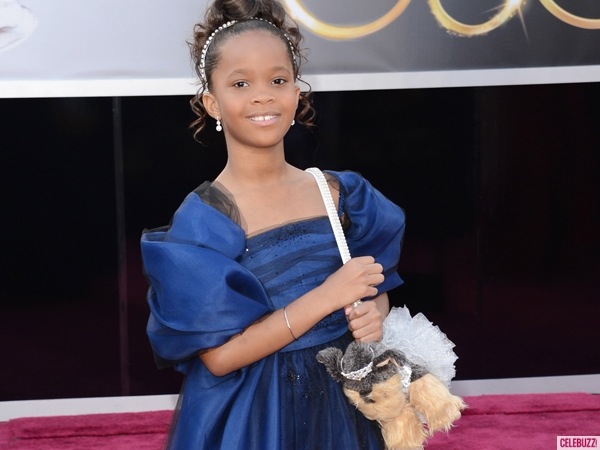 When Quvenzhané Wallis looks back on her first Oscar experience, what will she remember?

Will she remember the controversy that happened on Twitter right after the Oscars, the one that undoubtedly will come up when she searches for her own name on the internet?

In case you missed @TheOnion’s offensive tweet, you can click here to read about it. I’m not retweeting that or posting it on my blog. It’s easy enough to find elsewhere. And now they’ve issued an apology.

I come from a place where that word is uttered casually and often, as it is throughout many British commonwealth countries. But the c-word is unique amongst curse words. This word is meant to simultaneously demean and sexualize. It is a derogatory, gendered obscenity and it was used in a throwaway joke about a nine year old girl. A little girl, whose favorite fashion statements are puppy purses, whose talent shone so brightly in her first ever film, that she found herself nominated for Best Actress at the Academy Awards. A child who deserves to cherish her innocence, and to look back on this experience as one of the most magical and transformative of her life.

I’ve been a fan of The Onion for years. I own their books. I’m a frequent visitor to their website. And I am so disappointed in their new direction of shock humor, akin to the kind of jokes that a Jim Norton or Anthony Jeselnik would tell. The Onion used to be about clever, funny satire. Even though I get that the tweet was meant to be a statement on today’s view of celebrities where we feel free to tweet them cavalier insults or write articles about why they hate a certain celebrity (case in point Anne Hathaway). The same joke about Quvenzhané could have been achieved by using a more benign word. If they’d used “jerk” instead of the c-word, we wouldn’t be talking about this today.

This isn’t about politics, even though commenters on certain websites will make any and everything political. Trudging through the comments on the Hollywood Reporter article about this incident today was an exercise in depression. This has nothing to do with who’s in the White House or what’s been said about political figures by comedians in the past. This is about a child, not an adult who is more than capable of defending themselves.

Quite simply, to me it’s about right and wrong, and this need to get attention by any means necessary. It’s about this linkbait, click here now, damn the consequences and forget your feelings mentality that’s ruling the internet. It’s about the way that women of color are treated in the media as a whole and about how women in general are used in humor as sexual objects for crude punchlines. Apparently it doesn’t matter how old you are. Apparently anyone is fair game.

I hate that she will inevitably learn this word, and that this might be how that happens.

I hate that what should be a magical memory has become embroiled in media outrage.

I hate that what was once one of my favorite websites for nuanced, intelligent satire and laugh out loud jokes, has sunk so low in my estimation that I felt compelled to unfollow them on Twitter.

I hate what the comments on posts about Quvenzhané have revealed – a gaping chasm between genders and ethnicities, on how jokes should or should not be interpreted, all dictated by people coming from a place of ignorance and privilege. There are folks out there, mad at The Onion for apologizing for something that warranted an apology, something that should never have been said in the first place. Instead of recognizing that hey, this joke isn’t funny and it went too far and look at how many people are offended maybe we should think about why or at least respect where they might be coming from, the defense becomes about racism and dismissing righteous vitriol. It’s like it’s cool to be blasé and willfully wrongheaded about EVERYTHING. If you speak up and say you’re offended, then your sense of humor comes into question.

I’m over it. It should be obvious. There is right and there is wrong and this was WRONG. Point blank.

The next time Quvenzhané Wallis graces a Hollywood event, do us all a favor.

#1 – learn how to say her name right. She has addressed this many times. It is not THAT hard. And even if it was – she deserves that respect. If you can learn how to pronounce the names of fancy designers, then you can master Quvenzhané. Practice beforehand, if you need to.

#2 – learn how to speak about her in a way that won’t be offensive.

#3 – show her the same level of respect that you’d want someone to show your own daughters.

I’m sorry, Quvenzhané. I hope your next Hollywood experience isn’t marred by ignorance and misogyny. You deserved so much better than you got last night. But your fans love you and we know you’re strong enough to handle anything that comes your way.

For more on this, read the following amazing articles:

xoJane – An Open Letter to The Onion.

Clutch Magazine on The Onion’s attack on Quvenzhane

Karen Waldron on the academy awards, and why i don’t think bullying is going anywhere anytime soon

EdRants on Why The Onion Must Be Held Accountable For Its Vile Tweet.