I’ve spoken about my influences here on the blog before, and I’ve mentioned it in my TEDx talk too — one of my biggest early writing influences was Sassy Magazine. My classmate’s cousin would send down her well thumbed, slightly tattered copies in care packages alongside mixtapes featuring artists I’d never heard of at the time, like Bjork and Radiohead. Picture me as a young, Trinidadian teenager, discovering songs like Human Behavior and Creep at the same time as I was reading the words of Jane Pratt and her contributors. 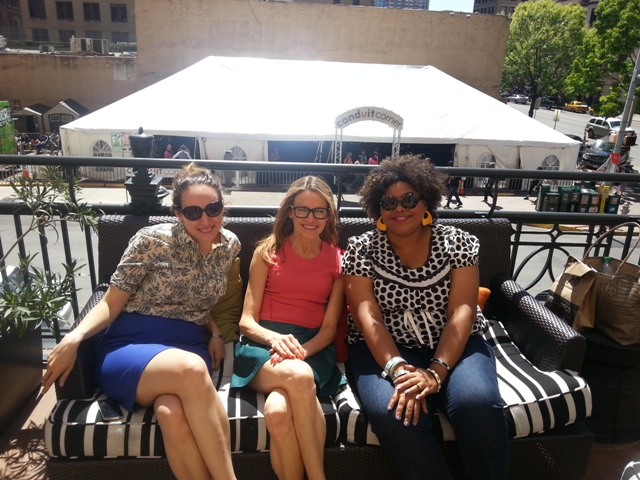 From left, @Corynnes, Jane, and me!

I just saw Jane Pratt speak at SXSW, and she was so right about one point she made — her magazine did have GREAT pass along rates. Her magazine, Sassy, taught me that I could write the same way I talked, and that people would love me for my voice if I did. Sassy gave me the courage to speak my own truth, quietly and clearly (shoutout to the Desiderata). Sassy showed me I could keep it 100% on paper and in real life – I didn’t have to put on an artificial voice to find a place in the writing world. Sassy gave me journalistic goals to aspire to. Sassy and Jane magazine made me start to read magazines with a different eye. I started thinking that I could grow up to be just like Mitzi Miller, or Christina Kelly or Jauretsi Saizarbitoria. I started reading other magazines with the same eye, too. Why couldn’t I grow up to be Peter Travers of Rolling Stone, if my writing and my critical eye was sharp enough?

Audacious thinking for a girl growing up in Trinidad. I didn’t know anyone who was doing this kind of thing in my real life, but the seed was planted. I realized that a future in writing was remote but still, somehow, a possibility. And when I started writing poems under a pen name for the Sunday Guardian’s teen section — and getting letters in response — that cemented it. I’d found my life’s path.

My dreams centered around print for a long time, but I came to realize that it wasn’t that easy – not unless you lived in NYC and had the right internship/connections/name. My attempts to reach out to writers at publications in my era didn’t go far. I met Debbie Stoller of Bust years ago, but the connection never gelled and I second guessed my potential of writing for them (eventually they’d write an article on natural hair and include my name in it, which was awesome). I never made a connection at Essence or Ebony until I was well into my blogging career. Blogs changed the game for me. Suddenly being an incredible writer and content creator was all you needed to make a name and an impact. The walls that seemed insurmountably high, weren’t as insurmountable as I thought. I built my own platform. And that platform has led to all kinds of amazing things that I never could have dreamed of before.

Take for example, this Tuesday when I got to see my teenage idol, Jane Pratt, speak at SXSW and share the lessons she learned from creating Sassy, creating Jane, and BEING Jane. Now she’s building an online empire with xoJane.com (which yours truly contributes to, but not often enough). Jane just launched a new beauty site, xoVain.com, which takes her signature approach to beauty. You won’t find writers referring to their hair as “tresses” or “locks” or any other flowery synonym. xoVain will be keeping beauty and style 100%, and I’m honestly excited about it.

What were the best nuggets of life advice from Jane Pratt’s SXSW speech? Here were the messages that lingered with me.

— “If someone asks you to water down your vision then you risk losing your passion for what you’re doing.”

— “Ignore anyone — even the little voice inside you — that says you’re under qualified to do something. Never outgrow your blind ambition”

— “People’s default setting is to not like you.” And how does Jane deal with that? By responding, by sharing her personal issues and problems, and letting people know they aren’t alone in being screwed up and adrift and unhappy and flawed.

After hearing Jane Pratt speak — which would have delighted teenage Patrice to bits anyway — I got to meet Jane Pratt. We sat on the terrace at the Intercontinental Hotel, basking in the beautiful Austin sunshine and chatting about our first SXSW experience, writing, xoJane, xoVain, and more. And at the end of our encounter, I got to tell my teenage writing and editing idol how much her work has meant to me, that Sassy also changed my life, and that I learned my path and discovered my writing voice because of her. What did Jane say to all of that? “I taught you well.”

It’s one thing to have an encounter and think of it in a certain light, and it’s another thing to have that feeling completely confirmed. 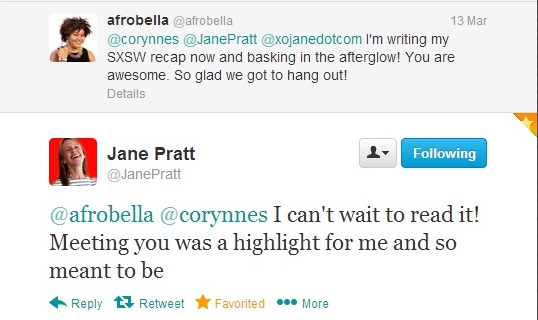 I mean…wow. My heart is so full.

I went into SXSW expecting amazing adventures, but I didn’t expect to close the whole thing out on such a special, full circle moment in my life. I wish I could write a letter to my angst-ridden, self-loathing 16 year old self and tell her about it!

My first SXSW was amazing. Totally going back next year. Who knows what adventures will await me then?