Beautiful, talented, enigmatic and introspective – an in-person experience with Janelle Monae gives you unique perspective on how the petite singer has ascended the pop music throne. When you see Janelle Monae in person, you’re awestruck at her gorgeousness and when she opens her mouth to speak or to sing, you’re compelled to listen.

That thing that the French call je ne sais quoi, the It Factor, that special sparkle that makes a person a star – Janelle’s got it. It dances in her eyes, it glows in her skin, and you can hear it in her voice. 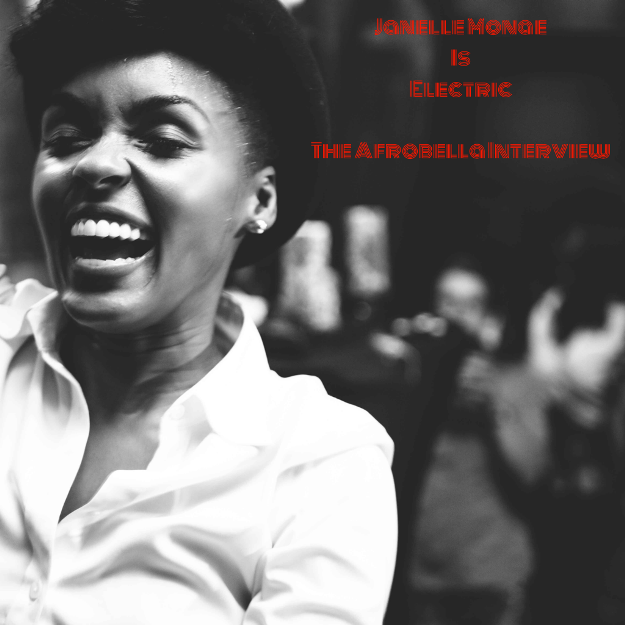 The first time I had the pleasure of meeting Janelle Monae, it was brief and unexpected. She was performing at the Delano on South Beach and I believe it was New Year’s Eve, 2008. Janelle Monae and Teyana Taylor were performing by the pool while The Roots were performing in the Florida Room. It was a magical evening. Janelle was an up and coming performer at the time but her star power was already undeniable. I’ve been an unabashed fan ever since.

When I had the opportunity to meet Janelle Monae again, it was thanks to my friends at COVERGIRL. We had our chance immediately following her incredible listening party for The Electric Lady, held in Chicago at the end of August. After her high energy performance, I was invited to sit in her van and do a quick interview. Initially she was professional and cautious, but once I told Janelle I was in fact, Patrice of Afrobella.com, this happened. And it was amazing.

OMG, right?? Janelle Monae was so warm and gracious during our interview. She offered me popcorn (someone hooked her up with Garretts Chicago Mix), and we sat in the tour van and chatted for 15 to 20 minutes. We discussed so many things! Consequently, I’ve edited this interview into theme based chunks for the TL,DR set. When I get nervous, I ask convoluted questions. And I was a bit nervous here. So forgive me and excuse me. Without further ado.

Janelle Monae on passion, her music, and higher powers.

“You know, I feel very much…. blessed and honored to even have this position… and to have the passion for wanting to do it. You know, I think that passion is what drives us, and I’m very passionate about community, passionate about making a difference and I don’t think that’s everybody’s calling. You know, I didn’t realize that it was my calling for a while and it took me some time to understand exactly what I wanted, what my purpose was, and what it was that I was supposed to do in this industry. This is what I feel like is my job and responsibility. I’m more fulfilled when I know that I’m focusing on the right thing, when I know that I’m thinking about community and people are inspired by the music, empowered by the songs and the lyrics that we’re writing and so I believe that my music comes from God – a higher power. I don’t…I can’t take credit for everything that you’ve heard. You know, I think that there is definitely someone…something, a higher energy looking out for me.” 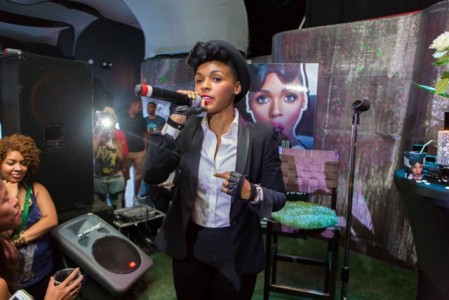 Janelle Monae on her purpose in the industry.

“I think my purpose is just bigger than music. Honestly. And I say humbly, not, you know, something that I feel like I’m better than or that I’m cocky but I do feel like it’s more than just music with me and I didn’t realize that until I started to be passionate about standing up for those who oftentimes are marginalized especially women, and the gay community, and you know, those who may have different religious beliefs and who are ex-communicated –“

JM: “Working class people, absolutely…I just feel more community service in my spirit than just creating music just for the hell of it.” 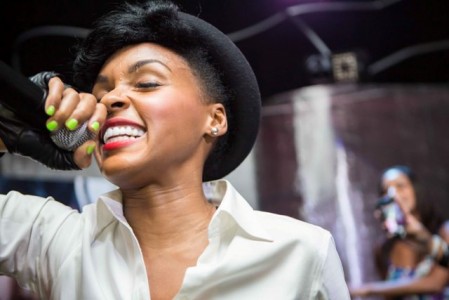 Afrobella: Talk to me about the COVERGIRL stuff because I feel like that’s a whole other dimension of who you are. You’re representing beauty and what I love about the people they choose is it’s women who are extremely beautiful, obviously, but it’s also about intellect and there has to be more to you to be a COVERGIRL . You’re in the company of Ellen, Sofia Vergara, Pink, you know what I mean and it’s amazing. When you’re chosen for that, you’re inspiring so many girls, you know, to see beauty in such a different way.”

JM: “Absolutely and I don’t take that for granted and I don’t take that honor or that title for granted. I understand that it’s a huge platform and like you mentioned I’m among some very strong, bold, powerful females like Sofia, Pink, Ellen, Queen Latifah…you know all these women as heroes in my opinion and they really been a great example for strong women and so what I love about the partnership between COVERGIRL and I is that it allows me to just continue to be myself. You know, before we started to work together and I think what drew them to me was the fact that I was already wanting to inspire and uplift young girls through my music, through my message, and through art and now, you know, with beauty – which is such a huge part of our self-esteem – not feeling beautiful and you know how we look at ourselves is so important man. Especially with young girls when they’re tryna decide, oh man, am I gonna keep my hair, you know, its true texture or am I gonna perm it…are people gonna judge me when I get a relaxer? You know, all these little things…and all I’ve wanted to do is just encourage people – men and women – to love yourself for who you are first, then make those decisions after and, two, embrace the things that make you unique even if it makes others uncomfortable and even if that person happens to be you. So, I get a chance to say that on such a larger scale and I think COVERGIRL diversifying the roster it sends such an important message because the world is so multicultural – so many different, um, ethnicities and young girls who need to see themselves. So I hope young black girls especially are encouraged and know that they are COVERGIRLS.” 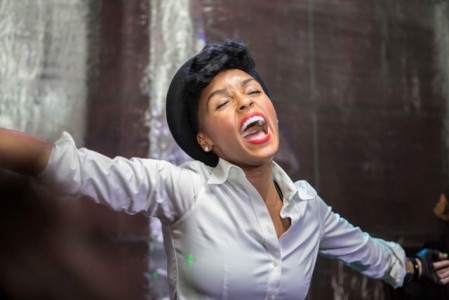 Janelle Monae on Natural Hair and being a role model

Afrobella: “They are, you know, and looking at somebody like you – you mentioned hair texture – obviously that’s part of what my blog is about. I never try to judge anybody’s choices but for you to be in the position that you are in, rocking your hair the way that you do, you have to know what that does for little girls coming up right now in college and high school and even younger, just to see that reflection of ourselves.”

JM: “Absolutely, I definitely do think it is important to have those options and especially in beauty and cosmetics because it’s been so one dimensional for a very long time and that’s why I commend COVERGIRL and I think it’s an amazing partnership for them to, you know, wanna do business with me. I mean I did not see myself out there at all — I mean I was wearing a tuxedo, I’m still wearing it, you know — and having natural hair and a woman of color and all these things and kind of fighting against sexism…my goal is always just be in control of your body and don’t feel as though you have to succumb to the peer pressure of conforming how you may dress or wear your hair because typically that is what women should do. You know, it’s playing into those stereotypes and marginalizing women is something that, you know, I feel as though I have to stand my ground on and not be an advocate for.” 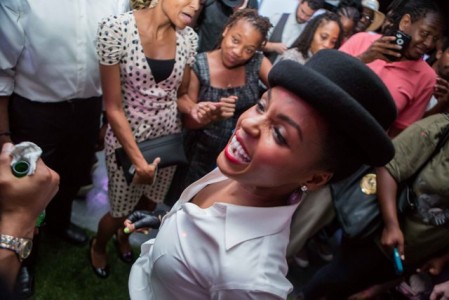 Janelle Monae on what she hopes listeners get from her new album, The Electric Lady

“I want people to feel empowered and motivated to change lives in the world around them. Go into the communities and get rid of laws that are not of love and not of… respect for life. I think that it’s important for women to feel empowered from this album and to want to be an electric lady. And electric ladies are not – they don’t all have the same hair texture or same skin complexion or the same size but the one thing that they have in common is the community and wanting to nurture the community more and wanting to help the next generation and taking on that responsibility and using their powers…and so I want everyone to know how hard we worked on this album…if you are a music lover and a lover of just an album experience…I mean we brought in an orchestra, live instrumentation, horn players, string instruments, I mean – I worked with some of the music industry’s most talented individuals who do it for the love of art and, um, I think that, you know, I hope that everyone uses this album in their life like their Bible. You know, sometimes when I go to church, the sermon may not always speak to me but a song can. A song can give me goose bumps which I’ll never forget and I’ll always connect with that message of that song and I just pray that people connect with the messages in the songs and they’re able to enrich their lives and become better people by listening to them.” 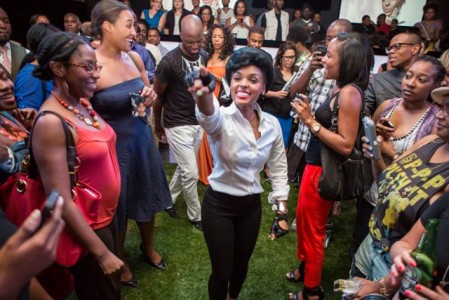 Janelle Monae on social media and not following anyone on Twitter

Afrobella. So you’re on Twitter; you’ve got a huge following on Twitter but you don’t follow anybody but you still communicate with your fans which not everybody does. You say you don’t see yourself a celebrity but you know, you are, you know I mean to many and you still are accessible in the way that actually is humanizing and is awesome and the way that it should be. What is the – what’s the reasoning behind not following anybody and what do you get out of engaging with your fans on social media?”

JM: “Well, I was, um, told by my therapist that I probably should not follow people because I – I’m part android – and my sensory overload to everybody’s life was becoming a little bit too overwhelming so it was because of too many different thoughts going in my brain – “

AB: “…filling your mind with everybody else’s thoughts?”

JM: “And I needed to record my album, I needed to leave room for creative thought. You know, it’s all love. I communicate with all my friends. They’re on there. Text messaging…email…same kind of form but more private, you know, so in order to create music and create the electric lighting, you know, I needed to have a clear head and a clear mind and, um, so for mental stability…”

JM: “Being part android is really hard. It really is.”

Janelle’s album The Electric Lady is available, and she’s just released a very cool video for PrimeTime, featuring Miguel. One of my favorite tracks on the album!

Thank you to Janelle and COVERGIRL for this amazing interview, and thanks to Chuck Olu-Alabi for the photos!