I used to celebrate New Year’s Eve in a raucous way. Lots of drinking, lots of noise, lots of people around to toast with and kiss at the stroke of midnight. Party like a rockstar and recover all day January 1. I’ve got some great memories from those years. And honestly, I’ve also had some moments of regret. I’d wake up on January 1st feeling terrible, the results of drinking too much and not feeding my mind, body or spirit with anything nourishing.

A former bartender friend of mine used to call New Year’s Eve “Amateur Night.” Why? Because the bars and nightclubs are filled with people who don’t get inebriated often, all crushed together trying to get as sloshed as possible. I used to be one of them. When it gets not-so-fun in my past experience, is after midnight when folks are slurring and stumbling and getting sick. It gets scary when you consider the folks who are getting on the roadways, driving home impaired in the wee hours of New Year’s Day (Please, please never drive if you’ve been drinking. If you ARE venturing out for New Year’s Eve, make sure you’ve hired a driver or have a designated driver or know how to take public transportation to and from your destination. Be clear-headed as you head home. It’s so important. Just a friendly and loving PSA on that note).

A few factors led me to reconsider my New Year’s Eve celebrations. Age. Not wanting to spend exorbitant amounts on fancy dresses and shoes just for one night. Moving from Miami’s heat to Chicago’s cold, which means New Year’s Eve is inevitably freezing. And a basic shift in beliefs. I like to be a bit more intentional with my NYE in this phase of my life. Here’s how I make my own New Year’s traditions for luck, love and intentional resolutions. 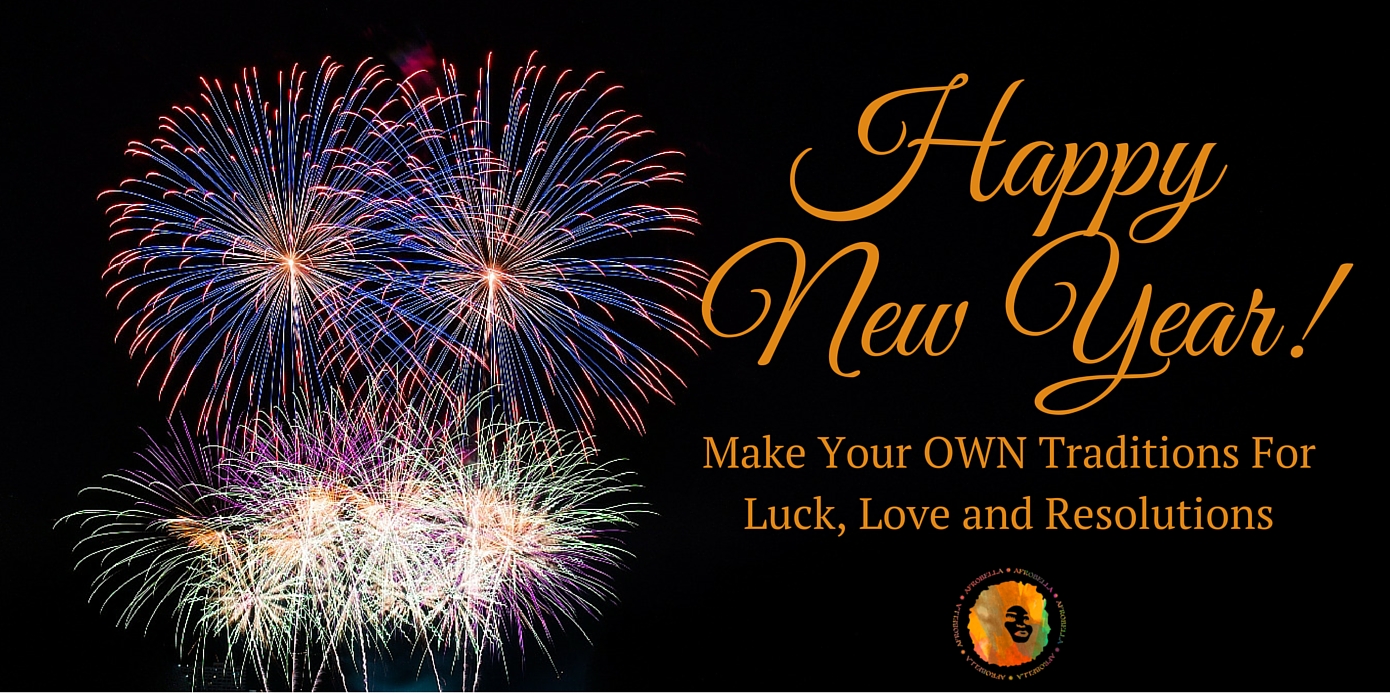 In Trinidad, I got the party started. Literally. When I was a brand new baby, I refused to calm down when my parents were dressed up and ready to leave for New Year’s Eve – in Trinidad we call it Old Year’s Night. That year, the party came to us. My parents called their friends over, and our annual family Old Year’s Night party tradition began. Even now, it goes on without me. Some years the party has been big, involving live music and rented tables and chairs. More recently it’s been scaled down so it’s less to deal with.

The belief in peas as being a symbol of New Year’s prosperity spans across the diaspora. The peas are just different in some places. In Trinidad, we make pelau with pigeon peas and my family will enjoy that for dinner tonight. In the US, most Southerners make black eyed peas – my Facebook fans suggested all kinds of delicious recipes from fritters to stew. This year, I came up with a New Year’s Day menu that involves traditional good luck ingredients from a variety of cultures.

For dinner I’m incorporating the traditional black eyed peas and greens and making this Epicurious recipe for Garlicky Black Pepper Shrimp and Black Eyed Peas, served with greens. I’ve never done this before, but today I bought grapes for the traditional Spanish 12 Grapes at New Year’s tradition (and, bonus. I’m making Sangria!)

Tonight, my husband and I will ring in 2016 with a champagne toast, and a dinner of Cornish hens and stuffing. I far prefer our new tradition of a romantic and intimate dinner at home instead of a lavish evening in a loud crowd. After midnight, I pray. I light candles. I thank God for letting me see another year. I like the ritual of doing a midnight sage smudge to cleanse your home of old energy, and I might do that again this year.

I like to usher in the New Year with a clean home, something about that feels very symbolic and important to me. I make sure to have a clean kitchen and clean and fresh bed sheets. Before midnight, I take the trash out. I like to meet January 1st at midnight with no leftover or half-done chores.

My first acts in the New Year are deliberate. At the beginning of the year, I like to set intentions and spend some time journaling. I do an online vision board, and I prefer to write out a vision journal.  I do a past year exit interview to see what and how much I’ve learned. I look back on last year’s entry to see how far I’ve come. I make plans for the year to come. I dream big, on paper. And during the day I gotta tune in to The Twilight Zone marathon on SyFy – my favorite NYE television tradition!

And those are my basic NYE traditions. That’s how I’ll be ringing in 2016.

The beautiful thing in making your own traditions – you don’t have to do the same thing every year. I know many who find fulfillment doing yoga at the stroke of midnight, or going to church, or even just gathering together with friends and family to watch the ball drop (or the Chicago star rise, this year for the first time ever).

How do you celebrate? No matter how you ring it in, know that this is YOUR YEAR. Name it and claim it, bellas! Happy happy New Year to you!