An Interview with Phylicia Rashad – On Theatre, Television and Twitter

When you hear the warm, familiar voice in your ear you can’t help but be transported. You may want to say “Mrs. Huxtable!” or even worse, “Mom!” But don’t get it twisted. The voice on the other end of the phone is Phylicia Rashad, legendary actress of stage and screen.

She is not your mama and she is not Claire Huxtable. She is a thespian and a director – and during our recent interview we discussed her work as director of the play Immediate Family, which is currently playing at Chicago’s own Goodman Theatre’s Owen Bruner Theatre until August 5. 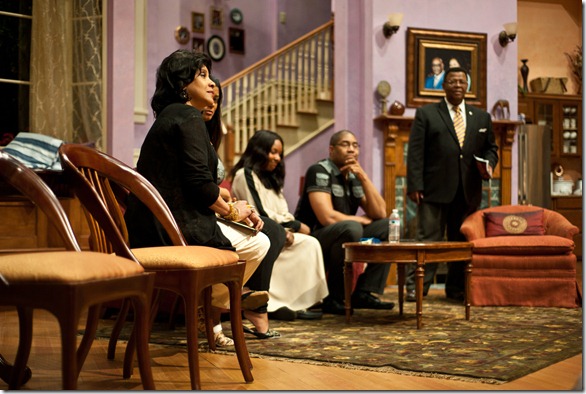 Even though she is most recognized by the American public as attorney and supermom Claire Huxtable from The Cosby Show, Phylicia Rashad’s first love has always been the stage. “Theatre is the discipline in which I trained and I always come home to this,” she explained in our interview. Her experience as an actress directly informs her as a director. “In acting, attention is paid to the detail of realizing a character and understanding a person. In directing, attention is paid to every detail of the production. The director’s job is visualizing, developing a vision, and creating energies to align to create that vision. You’re working with the playwright, the stage crew, all the people you don’t see who make that play WORK.”

It turns out Phylicia has known playwright Paul Oakley Stovall for some years now. When he asked her to direct his new play, timing turned out to be ideal – amidst the projects Phylicia already had locked in, there was a window of time where she could devote herself to this Chicago-based play by a Chicago-based writer. “What attracted me was the prospect of working on a new play with an emerging playwright,” she said.

Immediate Family was earlier produced under the title As Much As You Can at Dog and Pony Theatre Company at New York’s International Fringe Festival, and at Celebration Theatre in Los Angeles, and the play received a 2009 GLAAD Media Award nomination. It’s about love, acceptance, and understanding – all universal themes, Rashad explained. “That is the core of most works – the core of Raisin in the Sun, Death of a Salesman – it’s the core of most theatrical work. This is another look at family, a look through another lens…that is the power and beauty and joy of art. It gives us the appreciation for humanity.”

When Immediate Family wraps in Chicago, fans of Phylicia Rashad can look forward to her return to the small screen. She will be one of the stars of the new Lifetime version of Steel Magnolias, which will feature an all-black cast. 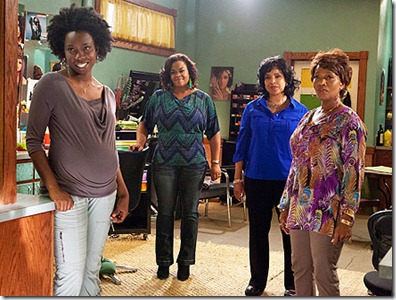 Photo by Annette Brown, via People.com

Phylicia will star alongside Alfre Woodard, Jill Scott, Adepero Oduye, Queen Latifah, and Phylicia’s own daughter Condola Rashad.  I cannot WAIT for this!

Steel Magnolias will make its debut on Lifetime this fall. And there’s also Do No Harm, a TV series debuting on NBC where Phylicia Rashad is the Chief of Surgery in a hospital. “She’s VERY different than Claire was. She is NOT warm and fuzzy,” says Phylicia.

Having a conversation with Phylicia Rashad is a little intimidating and a lot enlightening. She’s a woman of strong opinion and tremendous intelligence, who is extremely eloquent and understandably careful with her words. During our interview she expressed concern for the future generations, in terms of arts and education. “I really do wish people would calm themselves down and think. We need to make sure young people enjoy literature. Artistic expression is fundamental to human development.” She also spoke very bluntly about the choices we’re making as a society, in terms of who we elect. “Why do we the people pay and elect people to take things from us? We are electing and paying those people to take things from us. You can’t rest this responsibility on one, five, ten, or a thousand people. This is where things have gone awry. We allow ourselves to be divided, to be distracted by the popular headline or whatever.”

I yearned for a longer political discussion with Mrs. Rashad, because she is absolutely fascinating. But then things took a turn for the awkward when I asked her about Twitter. You see, there’s a profile for @PhyliciaRashad. Which I follow. So when interviewing Phylicia Rashad, I asked her about her thoughts on Twitter and if she planned to tweet more in the future….and the response was basically “now what Twitter what now?”

It turns out that profile isn’t the real Phylicia Rashad. Yikes. I’m put on hold for a moment, and then Mrs. Rashad returns to the line to end the interview with her thoughts on social media. “There are some benefits to it [social media] but clearly it’s something we need to be mindful of. I think it’s too much information. For heaven’s sake, go read a book!”

You shouldn’t follow that faux Phylicia on Twitter, but if you live in Chicago, you SHOULD go see Immediate Family while you still can! Tickets to Immediate Family are available through the Goodman Theatre box office, 170 N. Dearborn St., by phone at 312.443.3800, or visit www.goodmantheatre.org. For $10 off all tickets, use FAM10 when purchasing online and at the box office. 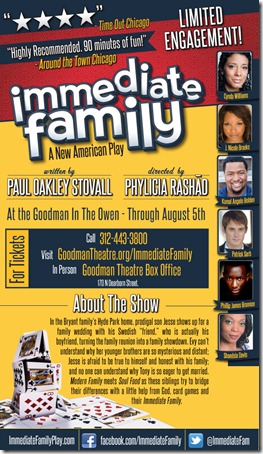 Renisha James says:
OMG!!!! *faints* You interviewed Phylicia Rashad!!! WOW! I must, need, want, HAVE to go see Immediate Family and Steel Magnolias. I just... I can't even express how much I love that lady. She is just a true example of class and wit and wisdom and if I ever get to be in her presence I wouldn't know what to do with myself. Just... wow.

I Am Your People says:
Amazing. I saw her daughter Condola in the theater show "Ruined." She's just as talented of an actress as her mother

Darlene says:
I really enjoyed reading this post. Thanks!