The first time I met Yvette Nicole Brown, I was nervous. I was at a huge Hollywood event surrounded by superstars and I felt like a fish out of water. I was standing off to the side while all kinds of instantly recognizable people passed by, and I wound up saying hello to Yvette and telling her how nervous/excited/nervous I was about being there. And she looked at me, touched my arm, and told me in all seriousness – right there in that bustling room amongst the stars, “you belong here.” That got me over my nervousness. And that’s when I knew Yvette Nicole Brown was genuinely awesome. 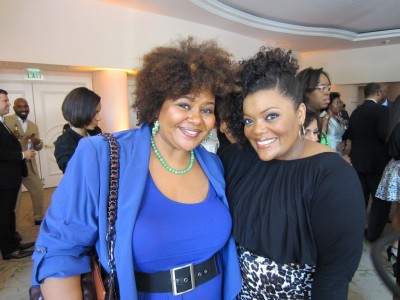 Hollywood is an industry based on ego and bluster, swagger and shamelessness. And somehow in the midst of it all, there is Yvette Nicole Brown, God fearing, humble, genuine, self-effacing, talented as heck and sweet as pie. Yvette isn’t really that far off from Shirley in terms of being guided by their religious beliefs. Yvette is definitely a woman of faith and she’s not afraid to discuss that in an interview or on Twitter, where she communicates readily with all of her fans.

I had the pleasure of interviewing Yvette, and there was SO much to discuss. From what’s happening on Community, to her work on Pound Puppies, to the pros and cons of Twitter, to what it’s been like as an actress of color in Hollywood, who is now blessed to star on one of America’s most passionately beloved sitcoms. Throughout the interview, Yvette shared her warmth, wit and wisdom. And now I’ll share those precious gems of wisdom with you all. 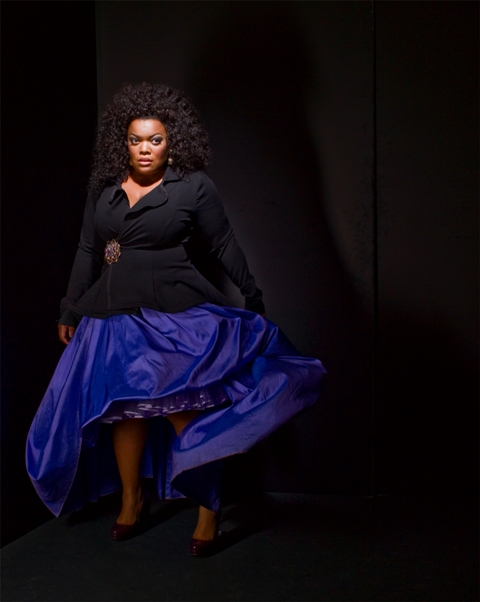 Yvette on the music industry. (Fun fact — did you know that Yvette started her career as a member of the East Coast Family? Check her out at 2:22!)

“I thought I’d be a singer. I was raised on Motown and the OJ’s. But the music industry changed. Now it’s about videos more than music, and now you have to sing AND dance AND be naked. I think the music industry is diminished because of that. There will be no more Peabo Brysons or Gerald Leverts. It is more of a shallow industry and that is part of why I didn’t continue.”

On Hollywood and her experiences as a black actress.

“It takes so long for us to make it. Black women never get to be the ingenue. We gotta kick around for 20 years before we get our due. The blessing is, a black woman could be 35 or 75 – for many of us, our career is beginning at age 40. And most of us have worked together in Hollywood.

The industry isn’t built for women like me to have a career. I know this is a gift from God. It is a huge blessing. I have friends who are way more talented and way more beautiful than me.

I think I do OK as Shirley. I think I’m funny and I appreciate my fans. But the sparkle of fairy dust, that’s the Lord.”

“It keeps me grounded. I’m a little poor girl from East Cleveland. There’s no way out, no direct path, from where I’m from to where I am now. But here I am, and in my mind that’s miraculous. As He has moved throughout my life I have experiences so many miraculous, serendipitous things. So many. So if I were to ever puff up and say that I’m magically delicious on my own without giving God the glory, something would be wrong.”

“My gift is that I love people. I love what I do. I love my work. And all this glory goes to Him. It’s why I don’t get attached to the fame. You gotta know what you are.

On her especially intense fans

I specifically asked her about intense fans and the CRAZY things people will tweet her. Yvette is kind and sweet enough to respond to most but some people are just beyond the pale, and treat celebrities like online punching bags. It isn’t cool.

“I love meeting everyone but I do wish fans understood that we’re all just regular people. On both sides there needs to be kindness and understanding.”

On paparazzi, the media, and the culture of criticizing the appearance of others.

“I feel like a lot of times…I’ll see pictures of celebs grocery shopping and in the comments people are tearing them to shreds. I’m like, how do YOU go to the grocery store? Don’t you just throw your sweats on and a baseball cap?

Even if you’re on TV or sing songs or whatever, you’re still a human being. Everyone on a red carpet without exception did the best they could on that particular day. They put it together with care. Who are YOU and why don’t you post a picture of yourself, doing your best? I think it’s mean spirited and the whole nation is being dragged down by negative people typing in the dark.”

On life, and her concerns about society.

“It’s a weekly consideration of mine – whether or not I should delete my Twitter. When I’m tempted to shut it down, I’ll hear from someone who changes my mind. If I can make one person think, pray or laugh, or whatever – if I can encourage one person who’s suffering, that’s what I’m there to do. But it’s only a few negative people out of thousands – It’s a great average.”

On hair and self care.

“I have the bad habit of not taking care of myself as I should. I can count on my hands the number of times I’ve been to a salon to have my hair washed and done in the last few years and that’s a shame because I do enjoy it so much. I use a lot of deep conditioners – I love the Olive Oil deep conditioner, or the Queen Helene deep conditioner…but there’s no real regimen I follow. When I do take care of my hair I notice such a difference. I think most of us don’t know as much about our hair as we should – we’ve been getting out hair relaxed and permed and jheri curled and we don’t know how to care for it ourselves.”

On hair and the criticisms we level against each other about it.

“We’re such bullies to each other when it comes to hair. Nobody is more honest about it than me – if it’s a wig or pieces or a weave, I will be the first one to tell you! Whatever you choose to do with your hair and your body is up to you…you don’t get into Heaven quicker just because of the way you choose to wear your hair.”

“I do my own makeup! I’m love love loving Kevyn Aucoin concealer – if you have dry or normal skin you can use it all over, I think it’s better than Dermablend.  I also love Laura Mercier foundation – but Revlon Colorstay is just as good. Benefit has an eyebrow duo – Brow Zings – I wet my liner brush and use it as liner – it dries immediately. It’s a powder you put water in, as soon as you put it on, it’s dry. I live for lashes. I love Demi Wispies by Ardell – they look so natural! And I use Maybelline or Cover Girl mascara.”

“I believe comfort is key. People say beauty is pain but I disagree. I’m not squishing my feet into a stiletto. I wanna be 80 and not have bunions and corns. I will never choose style over comfort. And so is attainability. I’ve never worn my hair, makeup or clothes in a way that regular girls in the world can’t. If I look good on the red carpet, so can you. It’s probably going to be a Rachel Pally, or Sofistafunk.” 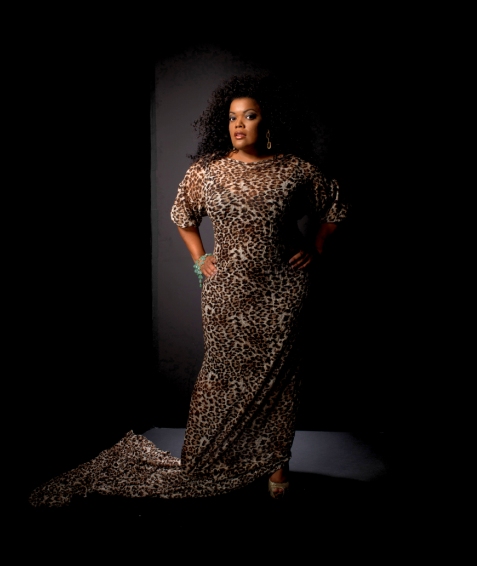 On Community, amidst the show’s internal changes.

“Everybody’s OK and everybody’s gonna be OK. The heart of the show beats in all of us. Dan Harmon created the show and the heart of the show will remain intact. Nobody’s coming in to destroy what Dan built – Community will remain Community. If the fans ask you, please let them know things are OK.”
On rumors of on-set tension. If you’ve read Yvette’s AMA on Reddit or her interview on Rotten Tomatoes, you’ll notice that she simply doesn’t get into drama, regardless of what’s being reported. The hallmark of a veteran and a professional.

“My only job is to be on time, say my lines, and be polite. Anything else outside of that, that’s somebody else’s journey.”

On being a role model.

“People don’t want to be role models, they want to be free. But something is lost in humanity when nobody wants to be responsible. But on the other hand, nobody in entertainment should take the place of family. That’s where the real role models should come from. I’m happy to be one, if that’s what I can be. That’s me. That’s my choice. I wish more people would make it. In trying to be better for other people you’re also being better for yourself, and there’s nothing wrong with being better. I’d rather be right than cool. I’d rather be good than cool.”

On her calling and her path.

“All you can do is stay on your path and do what God tells you to do. Ask God to guide you to it. I’ve known from a young age, this is the person God made me to be. I know what I’m here for…the call is to be kind, to love people. That’s my path. What’s your path? What does God want you to do? We all know, deep inside.”

For more of her wisdom, follow @YvetteNBrown on Twitter, and click here for her Facebook page. Besides being an incredible actress, she’s an inspiring and lovely person! And stay tuned to @NBCCommunity for updates on the show’s upcoming season which fans like me are REALLY looking forward to. (Hint hint, NBC. We want our Community!)

— Yvette is wearing gorgeous designs by Sofistafunk in these photos.

— Pound Puppies is an incredible cartoon with an incredible cast! Besides Yvette, voice talent on the show includes stars like Eric McCormack, Michael Rapaport, Betty White and Cree Summer. And DANNY COOKSEY who I’ve been OBSESSED with since the days of Salute Your Shorts. And every episode of the show is basically about a shelter dog finding a home, which is a GREAT message for children about animals, love, and the right way to find a pet and be a good pet owner.

Thank you Yvette for the amazing interview!

Joanna says:
Great interview! Comfy is the definitely the key when it comes to fashion. Love her look in the blue skirt. Gorgeous!!!

Nell says:
She always exudes genuine kindness and caring! I enjoy watching her in the various roles that she has played and hopes she has continued success.

Ebram says:
She is adorable!

Armande says:
Great interview! I am visiting your blog for the first time and liking it a lot. Finally a normal person writing about beauty instead of some teenage waif of a girl... :D

Ashley says:
I totally agree with everyone. This is just a good read all around. I'm sure I would feel like an ity-bity fish if I were in a room with you! Keep these awesome interviews coming- it's so relatable.

Bella says:
Ehoops! Good catch, will fix that! Thank you

Doctor Cris says:
I loved your interview with Yvette Nicole Brown. She seems like a down to earth---do not take your blessings for granted, kind of woman. Yvette's inner spirit shines so brightly that I'm sure she is a beacon for all. I do have to say, that you look so amazing in your blue outfit---the color looks so great on you.