Because I grew up in Trinidad, I didn’t grow up reading American literature. It was pretty much all British and Caribbean lit until I moved to America and started doing college literature classes. Naturally The Great Gatsby was an early essential, and from the first time I read it I had strong feelings about it. I loved F. Scott Fitzgerald’s lush depiction of jazz age excess, but I found myself hating many of the characters. I saw Nick Carraway as a passive observer of life, the person who lives vicariously, never truly living at all. Tom Buchanan was cartoonish and loathsome but Daisy was worse, and even in the book I couldn’t comprehend Gatsby’s deep, destructive love for a woman so shallow and selfish. 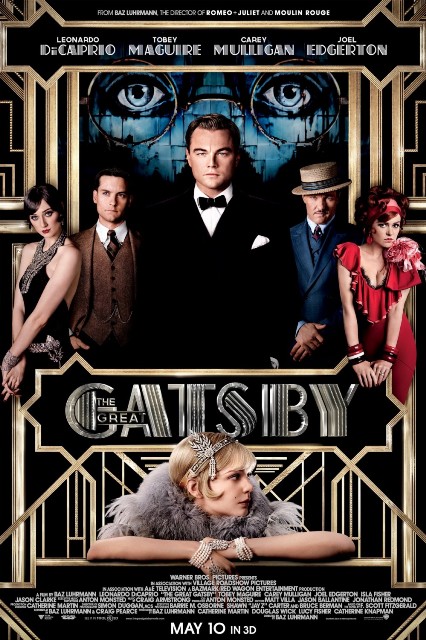 Before I get into this review, I feel like I should disclose my feelings about the film and the source material. I’m a big Leonardo DiCaprio fan, and I think Baz Luhrmann has a truly individualistic and brilliant eye for cinematic possibilities. I loved Romeo and Juliet – and that soundtrack included some absolute gems that have become classic songs (the end credit song, Radiohead’s Exit Music for immediate example). The fact that Jay-Z produced the soundtrack added to my intrigue. I went into The Great Gatsby screening with high hopes, based on the actors, the director and the buzz surrounding soundtrack. I didn’t counterbalance that with my feelings about the source material, so I’ll admit that from the beginning.

There were parts of this film that I loved, and that made me feel absolutely transported into the era. Let’s start with what I loved. 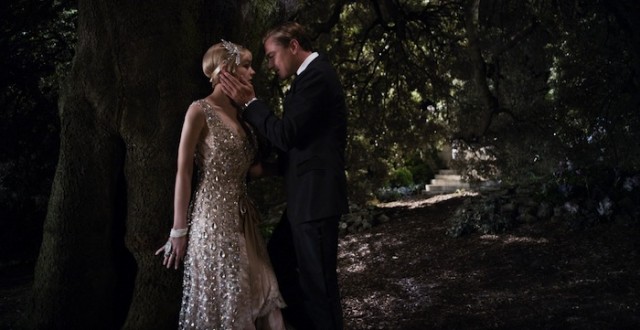 The costume design is absolutely to die for and it’s no small surprise that The Great Gatsby has become a merchandise marketing machine, with brands like Tiffany and Brooks Brothers coming on board to create Gatsby-branded collectors items seeking to capture that glamour for themselves. The party scenes are just as dazzling as you might have imagined them to be. And speaking of dazzling, show us that smile again Leonardo – 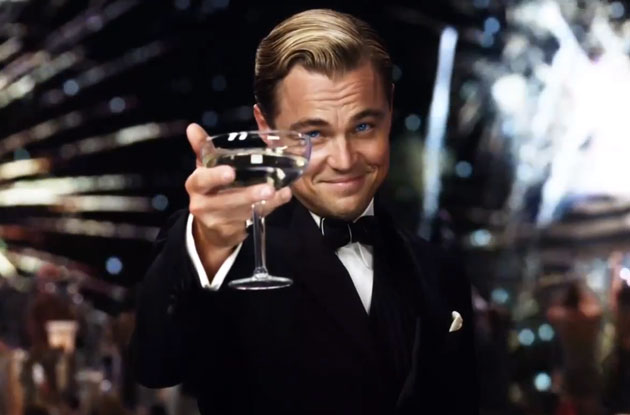 Leonardo DiCaprio is the cat’s meow and he is gorgeous and convincing as Jay Gatz AKA Jay Gatsby. He took a role that could easily skew towards caricature, fleshed it out and made it as whole as possible. He’s the biggest draw in the film and ladies who are headed to the theater based on their love of Leo most likely won’t leave disappointed. He’s great in this part.

The soundtrack was hyped so much as an essential and modern twist to the classic tale, but I’ll be honest – it didn’t add much to me, and in some scenes I felt that it detracted, or was used as comic relief (for example, the IZZO scene). Some songs worked way better than others. I loved Emile Sande’s jazz age version of Crazy In Love enough to want the soundtrack on Spotify.

This version of The Great Gatsby is so NOT East Egg – it is lurid, over the top, drenched in ostentatious fashion, style inspiration and dazzling visuals. I loved all of it. But amidst all of the ostentation, I lost the thread of plausibility and the negative aspects that bothered me about the characters in the first place came glaring into the spotlight. Let’s get into what I didn’t like.

It is a daunting and enormous task to bring an American literary classic to life, so I appreciate the reverence that Baz Luhrmann demonstrated for the book. Having said that, some books are just better as books – the written word more powerfully conveys the emotions that explain the plot of The Great Gatsby than this movie was able to, IMO. It seemed that Luhrmann knew that as well, since he used memorable passages of Fitzgerald’s prose, typewritten by Tobey Maguire’s latter period Callahan in a classic film cliché. Fitzgerald’s words are superimposed upon the screen and then they fall away like melting snowflakes, the first few times the effect was used I found it charming but at the film’s end I viewed it through a different lens, and I found it to have worn its welcome. It seemed more like a crutch, issued forth in the hopes of reminding the audience that behind the spectacle and the sets, there is vibrant literature here with a message meant to speak to the death of the American dream.

There were moments where I felt beaten over the head by imagery, like yes, the billboard with the spectacles, YES WE GET IT. I see what Luhrmann was trying to do, but it didn’t work for me, or for the audience it seemed.

I observed a lot from the audience’s cues – by the film’s third act, every time Gatsby called someone “old sport,” the girls in the row behind me started giggling and it occurred to me that The Great Gatsby “Old Sport” drinking game could be a success in the DVD release. The affectation was that ubiquitous.

Fitzgerald’s book is slender but staggering, and the writing keeps the characters three dimensional. That didn’t work for everyone in this film. Carey Mulligan didn’t convince me that Daisy was worthy of Gatsby’s undying, doomed love. Tobey Maguire stayed true to Callahan and reminded me of what drove me nuts about the character in the first place – he’s a device meant to observe but not disrupt the plot, the narrator who only exists to tell someone else’s story. Joel Edgerton’s Tom Buchanan was all bluster and machismo – in some scenes, I found him reminiscent of Bluto from the old Popeye cartoons. And to continue cartoon comparisons, I found Isla Fisher’s character to be equally one-dimensional – a Betty Boop-era flapper with hypersaturated makeup, whose final scene was reminiscent of a music video.

Can there be spoilers in reviewing The Great Gatsby? That would be almost like saying there could be spoilers for Titanic, or Romeo and Juliet. I don’t want to ruin the film for anyone who hasn’t yet read F. Scott Fitzgerald’s classic, so I’ll just end the review by saying this – I didn’t expect to leave the theater rejoicing, by any means, but I did feel a tinge of emptiness and vague, unsettled disappointment after seeing The Great Gatsby. Seeing this movie made me want to read the book again and then see the movie again to better grasp what I felt was missing. So I guess, in the grand scheme of ticket sales and DVD rentals, it’s all to the good. This film was initially intended to be released in Oscar season and now it ushers in the summer blockbuster period – but it fits well here. For all of the over-the-top scenery and 3D delight, it works and I think it gives the audience what it wants. Glitter, glitz, fashion and Leo. And the fact that the movie opened to $51.1 million this past weekend, indicates that maybe America got what it was looking for.

What did you think of The Great Gatsby?

Full disclosure – I cohosted a Great Gatsby screening and that’s where I saw the film.

Belize Real Estate says:
Thanks for this amazing blog.

pets says:
I have always found GG to be a sad story - a waste of a man.

Kristen @ Glambunctious says:
Wow! Fabulous review!! I just re-read the book a few days ago and I'm excited to see the movie. I agree with your thoughts on the book characters - Callahan's passive observer stance really started to annoy me as well, and I didn't think Daisy was that fantastic, either. I can't wait to see the party scenes brought to life; the film's trailers has them even bigger and bolder than I'd imagined.

Skindiva says:
I thought it was brilliantly rendered for all of its faults. DiCaprio is a character actor in a leading man's body and I thought that Carrie Mulligan's portrayal of the painfully shallow Daisy was on point. The party scenes were pure bacchanal. Sensory overload.

Jerry says:
Read the book yrs ago & really enjoyed....so looking forward to seeing the movie (in a few months at least, as I can never be asked to go to my local cinema!!)

indieblack says:
Thanks for the review. I could tell from the trailer that this movie wasn't going to live up to the book. I don't want to ruin the book by going to see this movie. Carey Mulligan and Isla Fisher? I think there was some major miscasting--not exactly how I imagined them. Fitzgerald was trying to paint a picture of the changing time in America (do they have the black people in the car driving by NIck to show black progress? probably not. but I could be wrong. In any case, thanks!

Shana says:
Everything you dislike about the book is what you're supposed to dislike, lolz. And the fact that you got that dislike of the characters from the movie to me means it did its job. I do agree that the music choices were jarring at times, that "old sport" was beginning to grate on my nerves, that the watchful eyes were shown one too many times. But other than that, this movie was spot on, and the fact that the typewriter theme was brought back up in the end to hit us with those famous last words was perfect. No movie can ever be just as good as the book, but this came darn close. You still understand the greedy destruction and vanity of the roaring 20s.

Shantenekia says:
My sentiments exactly! I just reserved the book at the library, wish I had read it before seeing the movie. I felt some kinda way after viewing this, some kinda way as in kinda pissed off. I wasn't expecting a happy ending, but i was expecting some type of redemption. I felt as if Daisy's character wasn't well developed (or strongly acted), I just couldn't connect with her and didn't understand why he loved her so deeply. Also, the whole billboard with the eyes had some kinda weird yet blatant symbolism (God is all seeing?? True, yet I believe they were Strongly suggesting that Big Brother is all seeing)... I'm noticing this more and more in advertising and media, eyes everywhere! Eyes covered , eyes poked out - what is that all about?? And the whole utopian/dystopian theme, the rich are extremely rich and the poor are extremely poor (the same theme of Hunger Games). I hate to get all conspiracy theorish, but sumin ain't right... I enjoyed the movie for most of the same reasons you mentioned - yet left feeling like something was off.

www.43things.com says:
Hey there! I realize this is sort of off-topic however I needed to ask. Does running a well-established website like yours require a lot of work? I aam completely new to blogging however I do write in my diary everyday. I'd like to start a blog so I will bbe able to share my experience and thoughts online. Please let mee know if you have any kind of suggestions or tips for new aspiring bloggers. Appreciate it!