One of the things I admire most about Gabrielle Union is how grounded she is. I’ve had the pleasure of meeting her a few times — I believe we first met at the Essence Black Women in Hollywood event, and then again when we did Essence Magazine’s Upfront event in 2013. That was a panel with Iman, Bethann Hardison and Mikki Taylor. I entered the room backstage with these icons that I respect so much, and I felt so nervous and out of place. I don’t know if she could tell or not, but Gabrielle came right over and introduced herself – “Hi, I’m Gabby.” Super warm and approachable. She sets your spirit at ease when you encounter her, and she remains so refreshingly normal in the eye of the celebrity storm.

Gabrielle Union has been acting since her teenage years, and she’s evolved into a multitalented entrepreneur and creative talent with an array of careers. Currently you can catch her on TV in Being Mary Jane – it was just announced that the celebrated program is set to end with a 2 hour movie event in 2018. She also stars as the Emmy-award winning voice of Nala on The Lion Guard. She has a clothing line with NYC and Company (and I’ve been sleeping, they have chic plus sizes now)! And on this particular occasion, I came to meet Gabrielle Union at the gorgeous Ulta store on Michigan Avenue to celebrate her hair product line, Flawless by Gabrielle Union, available exclusively at Ulta and at FlawlessHair.com! 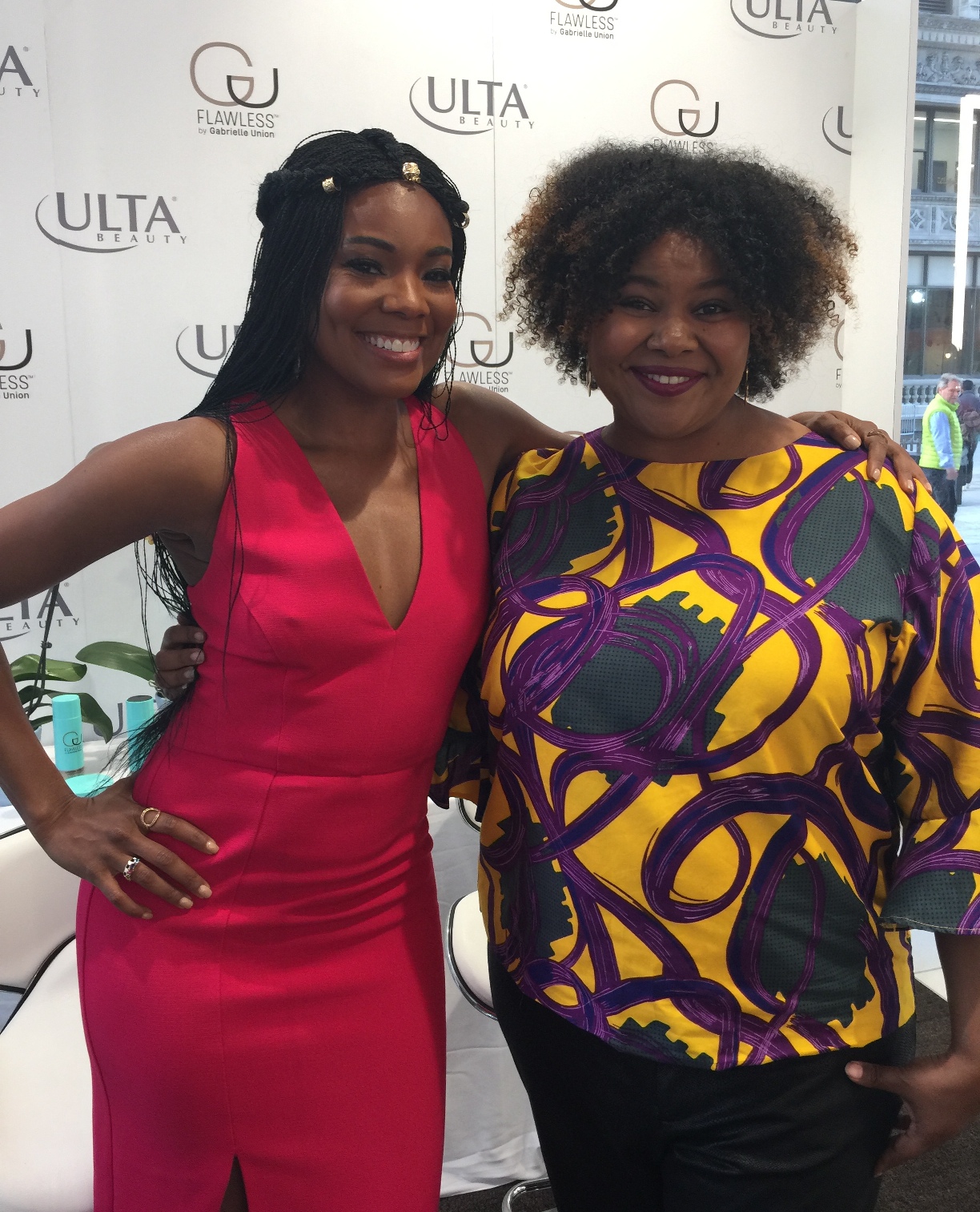 Here we are at the store. The second Gabrielle laid eyes on me, she gave me the warmest reception. It was a great full circle moment to interview her about this product line that is so much of a passion for her. We had a tight 5 minutes to catch up and this interview was basically captured before a live audience – fans were literally crossing the street while doing Instagram Live to film Gabrielle’s store appearance! 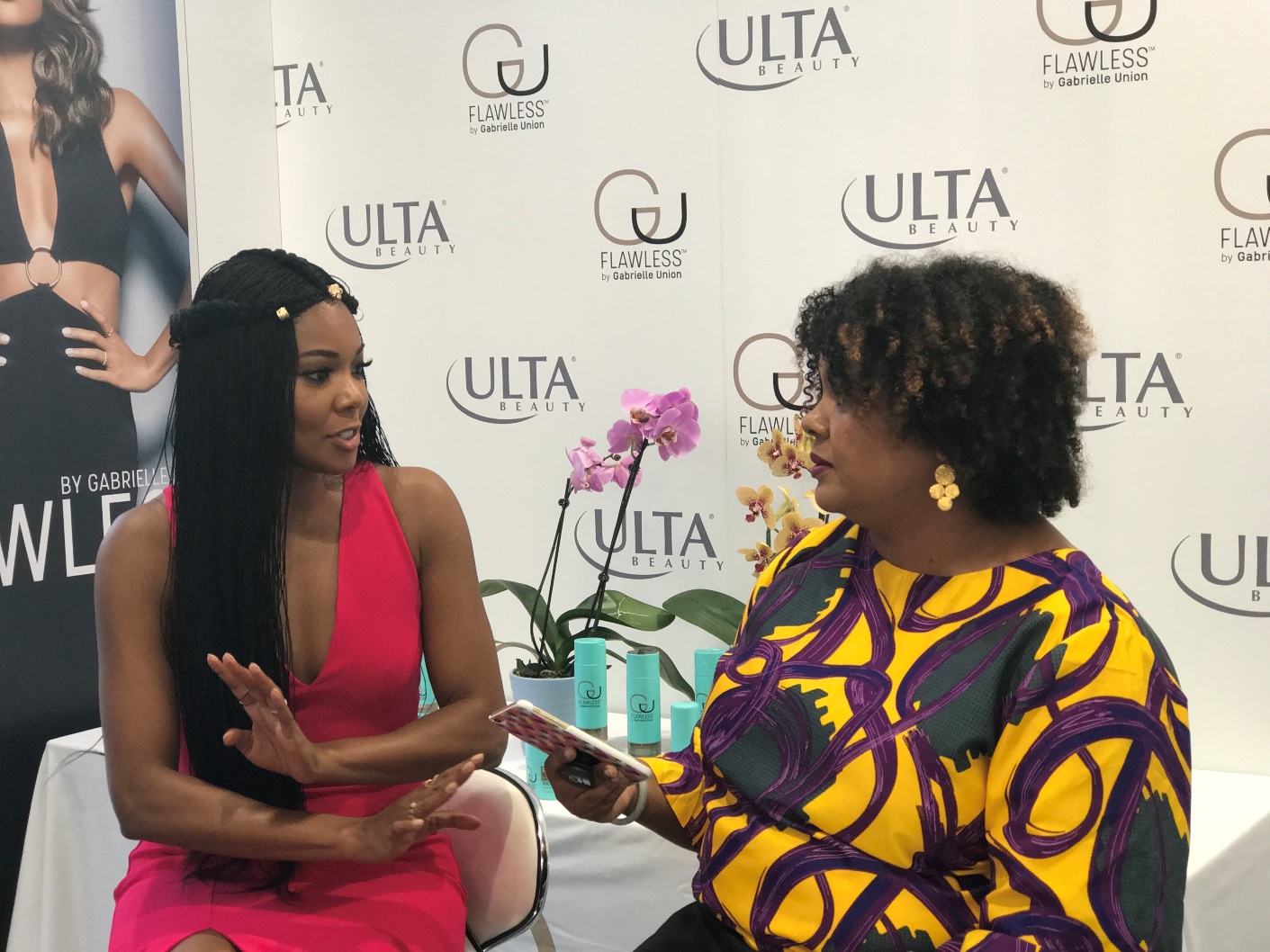 Afrobella: I’m really proud of you.  This is something that would have taken a long time and a lot of work.  So tell me about the creation of Flawless!

Gabrielle Union: It all came about from years in the business and sitting in hair chairs where they didn’t have the right product for me, or even if I brought in my own [they] didn’t have the right education to know how to use them.  So I was like ok, how do I create a line for textured hair, where all the products are in one location and they don’t fight each other.  So I don’t have alcohol-based products mixed with oil-based products that leave a mess on your hair… a product line that nourished and nurtured textured hair.  And that’s not, like… you don’t have to be in MENSA to know how to use it. So if you get home and you’re like, ok, this doesn’t look like… this is the hairstyle (laughter).  So I wanted an easy to use, great product that smelled good, that works.

Afrobella: They do smell SO good! Smell is huge and we also want to make sure – if you’re blending textures or transitioning, you want products that can work for the changes that we go through. Natural, relaxed, braids, weave – whatever. I thnk this is a line that is intended to wrk for all of our different stages and shades of beautiful, which is what I love about it.

Gabrielle Union: We’re constantly tweaking things, so we’re taking all of the feedback and we are tweaking.  So the next wave of curly hair products offer so much more diversity, because, if you’re just testing on my family’s hair, which I felt was very diverse, it’s not diverse enough.  We have to get so many different kinds of textured hair to see how different products work on different curl patterns.  So we have done a lot more research, got a lot more feedback, and I think the next wave of products that come out, the curly hair products are BOMB. The feedback has been unreal.  My husband… for the guys who like to rock their textured ‘fros, my husband has been the guinea pig and his teammates, and I’m just really proud.  Even him using my hair stuff on his beard… didn’t even think of that!

Gabrielle Union:  That’s what he said… so men are next. And also trying to incorporate some of our down-home kitchen recipes, so, when I’m in Atlanta on ‘Being Mary Jane’, every time I take my braids out, you know, underneath the wig and the weaves and everything, we treat my hair once a week with turmeric and manuka honey…We would do those masques and sit under the steam and I kinda did a little bit more research about manuka honey, so there’s a line coming out in spring of 2018 that is centered on honey, so I’m super excited. There is so much more coming, but it all comes from the feedback.

Afrobella: So far I love the masque – the masque is off the chain. It just softens my hair and makes for an easy detangle, and I can see the intention and heart behind it. The movement that is happening now in the beauty space…I see you as the leader in the hair, Rihanna’s doing the makeup, Ava had her Barbie…there’s a shift right now in the beauty space where women of color, creators of color have been able to step to the forefront and make the change we’ve been waiting to see. How do you feel being one of the leaders, helping to shape our beauty future?

Gabrielle Union:  If you would have told my buck-tooth eight year old self that felt invisible like, in my neighborhood, on TV, in books, at the library, like I just didn’t feel seen at all in any way shape or form.  That someone would even make a statement like that and use my name in there… I would have never have believed it.  So to say it’s a dream come true doesn’t feel big enough, I just feel honored that I even have the opportunity to live a dream and create a line that came out of need and necessity that I realized wasn’t just my own need and necessity, but a lot of people shared my sense of neglect and just humbling, shutting up, listening and tweaking, you know.  When folks were like, ‘OK, the edge control, we need firmer edge control.’  The next batch of edge control, we’ve got a firmer hold.  We are listening. 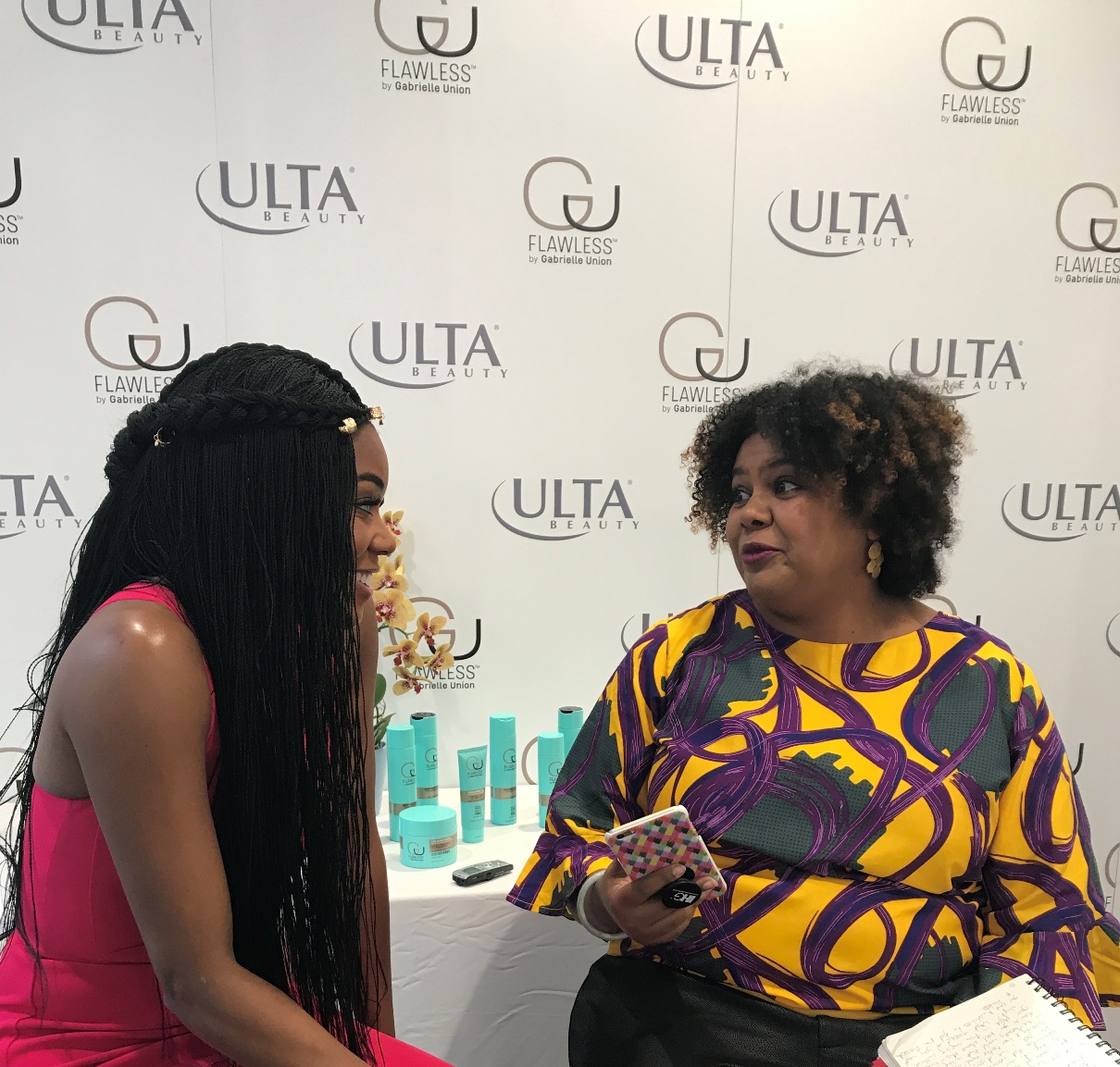 Afrobella: I can’t wait for the honey stuff, I’m so excited! You’re looking at my hair like you’re ready to get in it right now…

Gabrielle Union: I started following you because you gave the best hair tips and beauty tips, so I was a fan of what you were saying, and I trust what you say.  I knew you’re using it on yourself.  I followed the move, as you moved, you know, so just being, sitting here with someone I’ve followed for so long and talking about my own product, is insane.

Afrobella: I am just so happy! And so excited for you. My last question for you is this. One of the things I admire most about you is your multi-dimensional aspect…you do so many things. You’re not just on one TV show, you’ve got two. You’ve got a fashion line, you’ve got this hair product line and you have an amazing family life that you choose to share with us on your own terms. Which I think is a beautiful thing. How do you find balance…

Gabrielle Union: HA! (laughter) No. No!

Afrobella: OK! So what do you do to FEEL a sense of balance when you need it? Because it has to be overwhelming.

Gabrielle Union:  I just draw very clear boundaries.  I say no to a lot.  I’m ok with — if I’m giving 100% to Flawless, something else isn’t going to get it.  And that’s ok.  I’m not a bad person, I’m  not selfish, this is just what self care looks like.  But the idea that somehow, I’m supposed to be, I’m supposed to work out like Jillian Michaels, I’m supposed to be a chef like Chrissy Tiegen, I’m supposed to look like a supermodel as well… I’m supposed to be Meryl Streep and Viola Davis and, you know, run an empire and be a, you know, a freak, and you know, I gotta be like super stepmom, I gotta be like, at the PTA, I gotta be at the dog park with all the dogs… it’s not possible. And I always ask, when I’m near my husband in interviews, I’m like, ‘Can you ask him about his balance and how he does it all?”.  Because we never assume that men have balance, if they bring home a check, that’s balance.  But a woman has to be everything to everybody, but who are we to ourselves?  I’ll be 45 at the end of next month, and it took me that long to be like, ‘My balance is saying I don’t have balance and that today I need a self-care day’, or ‘Today I don’t have it! Sorry,’ or today I’m going to say exactly what I wanted with my 140 characters, now that I think it’s bigger.  And some days, I’m going to opt out of the death threats.  That’s OK.  And sometimes I can lead from the back and I can lead from the front, and that’s ok, and guess what, the world doesn’t freaking stop spinning when you take some time for yourself and you prioritize yourself.  But people will tell you [that] you’re a bad person.  You’re a bad mom, you’re a bad this, you’re a bad that, it’s like….

Afrobella: You’re doing the best that you can and being the best Gabrielle Union you can be. How ‘bout that?

Gabrielle Union:  At any given time, I’m just doing my best.

So during this interview, Gabrielle never mentioned that she ‘s about to release a book – We’re Going to Need More Wine, Stories that are Funny, Complicated and True – click here to buy! And Flawless by Gabrielle Union is available for sale at Ulta – check it out! My favorite products so far are the moisturizing shampoo and conditioner and that hair repair masque! 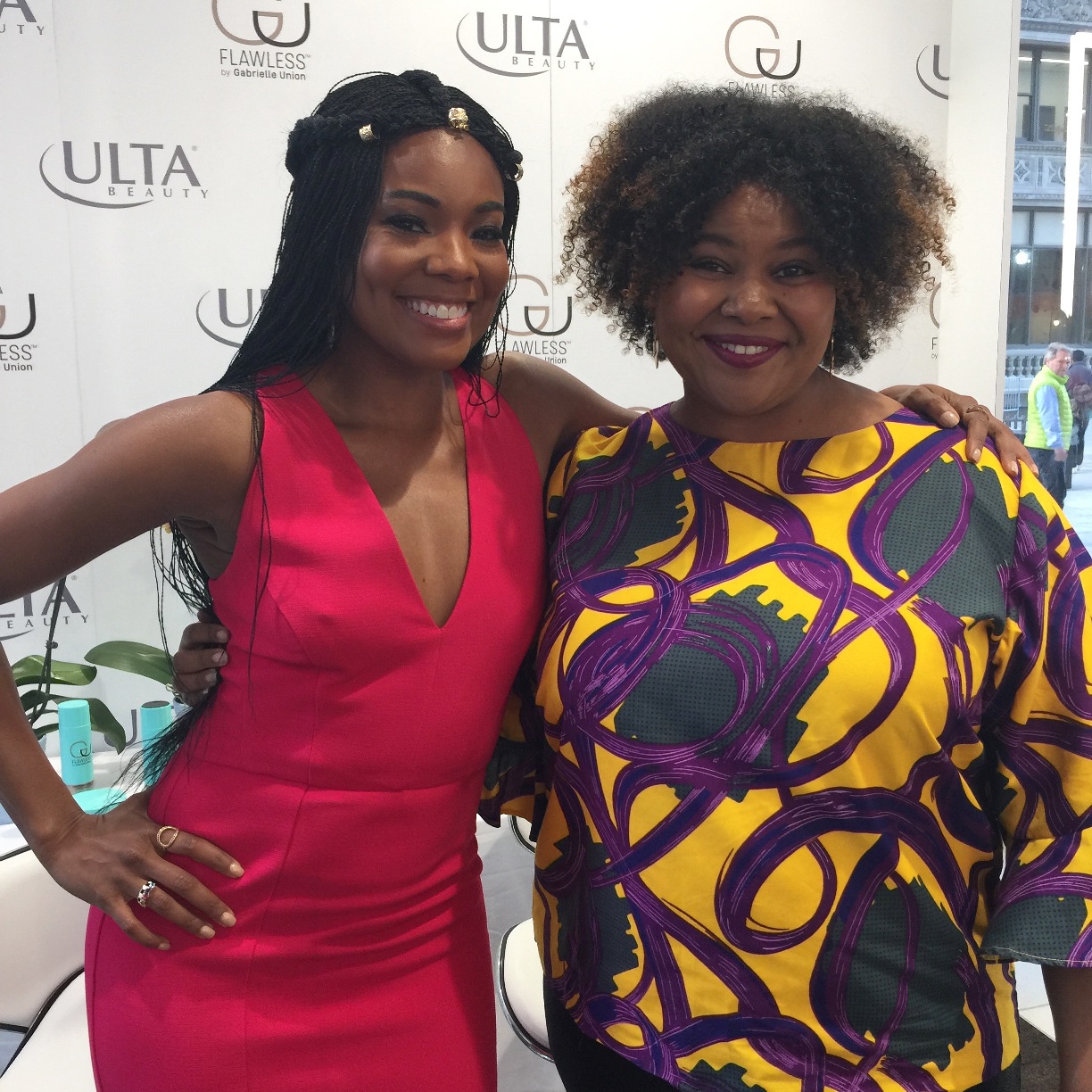 Pets says:
Great to see the reunion of you two amazing women!

IrieDiva says:
This was so awesome! I love Gabrielle Union, she definitely comes across as down to earth so to hear you confirm is awesome. When I read she had a hairline I thought it was actual hair! Good to see its hair products. I love using honey in my hair, it's in most of my DIY masks on my blog so yeah I'm excited about her new line.